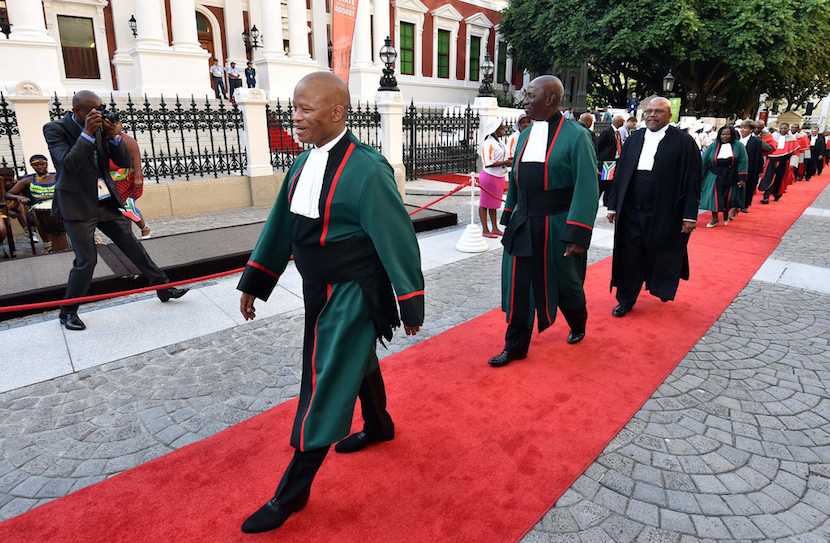 If it wasn’t for the courts, South Africa may have become a full blown failed state. This statement came from Justice Minister Ronald Lamola speaking at an event honouring Justice Edwin Cameron who retired from the bench. Lamola praised Cameron and his colleagues saying he and his fellow judges saved South African from total collapse. Cameron has predicted that the tough times the courts have faced in the past decade from state capture, is going to become even harder. Judging from the vindictive attacks from EFF leader Julius Malema in which he accused judges of being biased and even threatened that it would force the EFF into the bush, he may be right. The attacks on social media have also come from ANC-members and leaders and the Public Protector Busisiwe Mkhwebane who accused a judge of over-reaching in the Gordhan case. But these attacks should be viewed with cynicism because they can be regarded as self-serving and are meant to intimidate. Malema is trying to discredit the courts before he has to answer questions in court. As UCT Professor Hugh Corder points on this article; the critics should “ask themselves to which constitutional institution will they turn for protection in future.” – Linda van Tilburg

Critics of South Africa’s judges are raising the temperature: legitimate, or dangerous?

The South African judiciary is once more centre stage in the political drama unfolding around the battle for supremacy within the governing African National Congress (ANC).

In any constitutional democracy worth the name, the judiciary will be the ultimate guarantor of the rule of law and the supremacy of the Constitution.

If the judges act independently and impartially (as prescribed in section 165 of South Africa’s Constitution), their judgments will inevitably, on occasion, displease party politicians and members of the Executive.

And when the political process increasingly frustrates the enforcement and implementation of the Constitution, politicians and civil society will turn to the courts to seek endorsement of their concerns.

These actions, now known as in South Africa as a form of “lawfare”, frequently place the courts in an awkward position. That’s because they have to rule on emotive political questions. But, provided that they resist the temptation to exceed their assigned constitutional role, the judges must engage with the issues and attempt to resolve the disputes presented to them.

Judges thus function on the political plane, not in a party political sense, but because they exercise public authority.

As a branch of government, the courts must naturally be accountable for the exercise of their power. The means of achieving their accountability must be balanced against their necessary independence.

Accountability is achieved by judges sitting in open court and through their work being critically analysed through the media and the legal profession. Judges are also held in check by the necessity that they justify their decisions with reasoned judgments, which can be appealed to higher courts.

The right to free expression encourages critical engagement with court judgments. This is lawful, provided that it doesn’t incite violence, amount to propaganda for war, or advocate hatred accompanied by incitement to harm section 16(2) of the Constitution.

There have been times in the past when the courts have come under attack from politicians. For example, this happened when the appeal court stopped the apartheid regime in its early attempts to remove coloured men from the voters’ roll in the 1950s.

In the early 2000s, the then Minister of Health Manto Tshabalala-Msimang resented the Constitutional Court judgments compelling the state to provide life-saving HIV medication.

These disputes pitted the elected government of the day against the top court.

More recent cases have involved contestation between factions within the governing party. For example, some in the ANC have complained that the courts were exceeding their authority when they declared the conduct by former President Jacob Zuma and some of his close associates unlawful.

These criticisms didn’t seem to threaten the courts’ constitutional role, or the judges themselves.

But over the past few months the mood has shifted palpably and become more menacing.

The volatile political atmosphere in the country, and the litany of judgments handed down against the current Public Protector as well as against the opposition Economic Freedom Fighters (EFF), have escalated the temperature to dangerous levels.

This holds potential harm for the judiciary.

The most vindictive and undermining attacks – including the use of threatening and populist rhetoric – have come from the leader of the EFF, Julius Malema. He has characterised the courts and individual judges who have found against the Public Protector or the EFF in denigrating terms.

For example, he referred to the race of one judge who ruled against the Public Protector, and demeaned the standing of another black female judge in another such case. Most threateningly, in one attack he said that if the courts continued to find in the manner in which they had, the EFF might have to return “to the bush”.

Malema is one of the six Members of the National Assembly representing Parliament on the Judicial Service Commission, which is responsible for appointing judges. At the very least he should resign or recuse himself from such a role given his recent outbursts.

But are there no limits to being critical of the judiciary?

Judges can’t get involved in popular political exchanges, particularly when the charges levelled at them are irresponsible, sinister and increasingly personal.

So, what can be done to preserve their integrity and fearless pursuit of constitutional governance?

Firstly, the Chief Justice as head of the judiciary has a responsibility to speak out in its defence. Chief Justice Mogoeng Mogoeng did so when criticism from the Zuma administration became irresponsible.

Secondly, the legal profession and public commentators can come to the courts’ support. The General Council of the Bar has just done so.

Thirdly, South African law recognises a form of the crime of contempt of court, known as “scandalising the court”. In a 2001 case, the Constitutional Court found that freedom of expression should not be granted the exalted status in South Africa which it enjoyed in the US. It also said that a balance needed to be achieved between “the commitment to open and accountable government” and speech which was “likely to damage the administration of justice”.

In other words, those who recklessly criticise judges run the risk of being prosecuted for criminal conduct. This is particularly the case when statements lead to an unwarranted erosion of public confidence in the courts as a legitimate governmental institution.

As stated by Appeal Justice Nugent in 2007:

…If the rule of law is itself eroded through compromising the integrity of the judicial process then all constitutional rights and freedoms … are also compromised.

Those who value the rights and processes enshrined in the South African Constitution should be alarmed by the threatening disregard for them displayed by critics like Malema. And they should speak out in support of the lawful exercise of judicial authority.

I would further argue that the critics should pause, and ask themselves to which constitutional institution they will turn for protection in the future, their intemperate outbursts having undermined the courts.