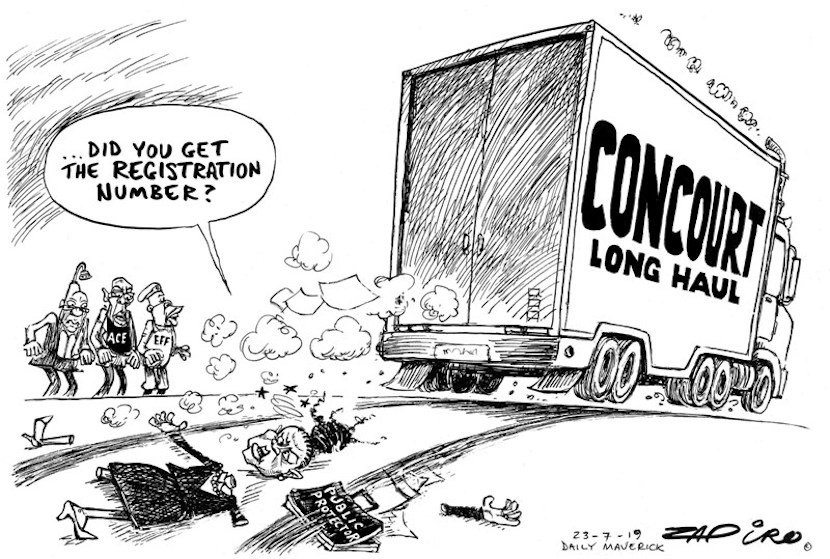 Urbane, eloquent and assertive, Deputy Secretary General of the ANC, Jessie Duarte, told SAFM on Friday morning that Public Protector Busisiwe Mkhwebane had had a raw deal and was being treated ‘vindictively’ by the media. That was shortly after confirming to host Stephen Grootes, that she supported sentiments expressed by Bathabile Dlamini and the ANC Women’s League that female party cadres involved in corruption were being discriminated against by the party, (particularly so in KwaZulu-Natal just lately). So, supporting women’s rights in the ANC has come down to this; fighting gender discrimination in corruption probes. If you want to interrogate Duarte’s claim that Mkhwebane is being victimised by the media, do no more than read yet another judge’s searing criticism of her in the story below. One wonders, shouldn’t Duarte be having a crack at the judiciary instead? Her biggest concession on Mkhwebane was that her lying to the Constitutional Court was “problematic”. We shouldn’t worry, she asserted in her comfortable, ANC-cushioned world; Parliament’s relevant portfolio committee would deal with it before the House voted on a course of action. Ah, that’s all right then… Story courtesy of the Daily Maverick. – Chris Bateman

For the second time this year, Public Protector Busisiwe Mkhwebane is being made to pay personally for having delivered a report tarnished by “gross negligence”.

In May 2019, the public protector’s report on the Estina dairy farm was set aside by the North Gauteng High Court, with Judge Ronel Tolmay ruling that the report was unconstitutional and invalid.

At the time of the judgment, however, the judgment on costs was suspended until the Constitutional Court had handed down a ruling on the public protector’s appeal against the personal costs awarded against her in the setting aside of her Reserve Bank report.

The country’s highest court ruled in July that Mkhwebane should pay 15% of the litigation costs associated with the Reserve Bank matter – and now the North Gauteng High Court has followed suit.

Judge Ronel Tolmay ruled on Thursday, 15 August that Mkhwebane should pay 7.5% of the legal costs of each of the two applicants in the Estina dairy case.

Busisiwe Mkhwebane made major changes to Thuli Madonsela’s “draft” report on Estina, omitted material aspects and signed it off. Clearly her followers don’t read these things 😂😂😂. It’s hers, she must pay. #PublicProtectorMkhwebane

In a scathing ruling, Judge Tolmay found that “the failures and dereliction of duty by the public protector in the Estina matter are manifold”.

The Estina report, released in February 2018, was widely slammed as a whitewash after it failed to examine the role of the Gupta family in the controversial Vrede dairy project, or to investigate the role played by Free State provincial leaders Ace Magashule and Mosebenzi Zwane in setting up the farm.

“In my view [Mkhwebane’s] conduct in this matter is far worse, and more lamentable, than that set out in the Reserve Bank matter,” Judge Tolmay wrote.

“At least there her failures impacted on institutions that have the resources to fend for themselves. In this instance her dereliction of her duty impacted on the rights of the poor and vulnerable in society, the very people for whom her office was essentially created.”

Judge Tolmay continued: “They were deprived of their one chance to create a better life for themselves. The intended beneficiaries of the Estina project were disenfranchised by the very people who were supposed to uplift them. Yet the public protector turned a blind eye, did not consult with them and did not investigate the numerous irregularities that allegedly occurred properly and objectively.”

At this point it’s safe to say that @PublicProtector has no credibility left- ditto those who find themselves arguing her cause. She is the Zuma of chapter 9 institutions. #Mkhwebane

Although the public protector had argued that the flaws in her report were due to a lack of resources, her office proceeded to appoint two separate sets of lawyers to deal with the report’s review application. This was unnecessary, as although there were two applicants in the matter, one set of lawyers could have dealt with both.

“These appointments must have caused an enormous escalation of legal costs for her office,” Judge Tolmay noted, describing the decision as demonstrating “total disregard for the taxpayers who will have to foot the bill”.

In ordering a personal and punitive costs order, however, the judge took into account that there were two sets of lawyers’ bills to pay as a result of the two applicants.

“The impact on [Mkhwebane] personally may be too harsh,” wrote Judge Tolmay, “and therefore the court adjusted the personal costs to a lower percentage for each applicant”.

The two applicants – the DA and the Council for the Advancement of the South African Constitution (Casac) – have expressed satisfaction with the ruling.

“It’s quite clear that following on from the Reserve Bank judgment, the law regarding personal costs order has been clarified; [the judge] quoted extensively from the ConCourt judgment.”

Naidoo said that there appeared to be scant available grounds on which the costs order could be appealed.

Public protector spokesperson Oupa Segalwe has since confirmed that Mkhwebane intends to appeal the judgment, however, describing her as “disappointed” with Judge Tolmay’s ruling.

The DA’s chief whip John Steenhuisen said in a statement that the ruling “makes it clear that Parliament can no longer delay the removal proceedings against [the public protector]”.

Steenhuisen described the ruling as an “indictment on Busisiwe Mkhwebane’s competence”, adding: “There is no more denying – the public protector is wholly unfit and improper to hold the office of such a crucial Chapter 9 body”. DM

The same day of the court ruling against the Public Protector Advocate Busisiwe Mkhwebane, a key player she failed to interview appeared at the Commission of Inquiry Into Allegations of State Capture Corruption and Fraud. On Thursday morning, former Free State Head of Department (HOD) of Agriculture and Rural Development, Peter Thabethe, took an oath to tell the truth. Thabethe recommended Indian dairy company Paras as a partner in a controversial dairy project. Paras has denied any knowledge of the South Africa incorporated company Estina, which was expected to provide expertise in establishing a dairy in the small town, Vrede.

Thabethe told Chairperson Deputy Chief Justice Raymond Zondo he had held key positions in government as an expert on agriculture, and is now retired. He was suspended after Mkhwebane released her report on the dairy, even though she did not name him outright. Mkhwebane’s predecessor, Advocate Thuli Madonsela, had included Thabethe in a draft report on the same enterprise. Thabethe joined the Free State government as HOD in 2011. At the time, Mosebenzi Zwane was the Member of the Executive Council (MEC) responsible for two separate departments, the newer Department of Rural Development and the existing Department of Agriculture. The two would later merge.

Thabethe testified Zwane chose the name ‘Mohuma Mobung’ for a strategy he, Thabethe, devised. It outlined intended rural development ideas for the province in line with the National Development Plan (NDP). The notorious Vrede Dairy Project was established under the ‘Mohuma Mobung’ banner. It was ostensibly a black economic empowerment project set to benefit emerging farmers in rural Free State. However, evidence suggests it was used to launder government money, allegedly to benefit the Gupta family and associates.

By the lunch adjournment on Thursday, Thabethe had said little about the controversial project, despite his critical role in its development. Evidence leader Advocate Leah Gcabashe SC needled Thabethe with questions on his understanding of the Constitution of South Africa, National Treasury prescripts and Thabete’s accountability for financial decisions while HOD. Significantly, in light of the costs order ruling against the Public Protector in the North Gauteng High Court, Thabethe disclosed he had been contacted as a potential witness in a new Public Protector investigation into the dairy scheme. Testimony continues. – Reporting by Erin Bates