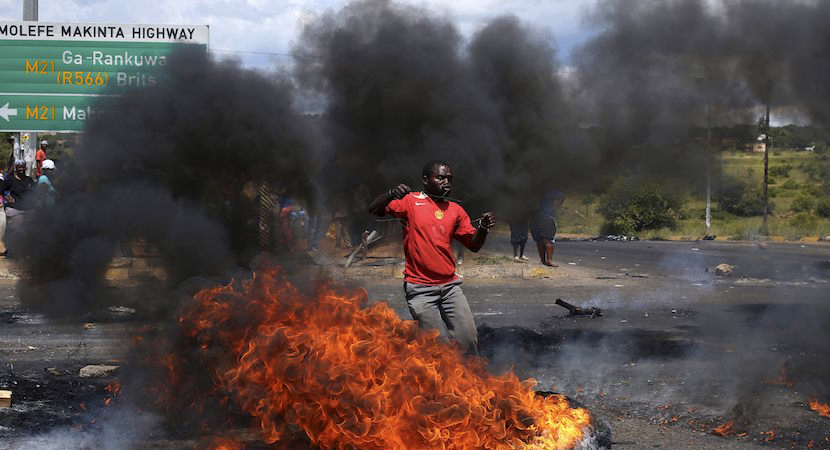 JOHANNESBURG — South Africa ranks only higher than Venezuela on Bloomberg’s Misery Index. It’s a sobering thought, but what is more sobering is how corruption and government inefficiencies are spurring on a growing, vicious cycle of violent protests which are rapidly rising in number. The country further finds itself in a vicious cycle in which growing youth unemployment is generating a very restless society. An Arab Spring situation is on our hands unless the government actually does something about it. In this piece, a solution is laid out on how to fix the country’s woes in the short and long term. Simple, logical propositions. But knowing our current political landscape, these propositions will be tough to implement. – Gareth van Zyl

South Africans are not happy. According to the recent Bloomberg’s Misery Index, South Africa is the second-most miserable country on earth. Venezuela tops the list of emerging countries.

This isn’t too surprising considering that the country is embroiled in multifaceted crises. It also has among the highest unemployment and inequality levels in the world.

Unfortunately, recent credit rating agency downgrades as well as the fact that the country is in recession mean that these horrid conditions are unlikely to reverse soon.

Consequently, the poor in South Africa have little chance of improving their lives. They will therefore be even more reliant on the provision of state services. They will also increasingly be on the receiving end of the two extractive systems that are deeply embedded in country’s socio-political and economic systems.

The first is the patronage and state capture machinery as recently documented in a report by leading academics. The effect of this corruption is that the capital allocated for service delivery is wasted, the private sector is crowded out, and the monopolising positions of dysfunctional state owned enterprises distort the economy.

The second is where state capture merges with patronage politics at local government level. This is accomplished by managing and staffing municipalities with unqualified party loyalists – or close associates – who disseminate services inefficiently from a shrinking pool of capital, while further extracting rents through a sub-layer of corruption.

The effect is that the poor must pay an additional tax in the form of bribes for access to mispriced and inefficient state services. In addition, as the looting via state capture and municipal corruption intensifies, service provision and delivery declines. This means that the poor are then subject to bribe inflation to gain access to shrinking capacity. Violent service delivery protests inevitably escalate.

South Africa’s youth statistics are depressing. Young people between the ages of 15 to 35 comprise 55% of the country’s 36 million working age population. Of the 19.7 million youths, only 6.2 million are employed while 3.6 million are unemployed but still actively looking for work, and 1.53 million have stopped looking for work. The remaining 8.4 million are at school, tertiary education, or are homemakers.

Youth unemployment is 36.9%. This is nearly double the unemployment rate among adults. Among black youth, 40% are unemployed compared to 11% of white youth.

Taking the level of education into consideration, 2011 data show that the unemployment rate for 25 to 35 year olds who had less than a matric was 47%, compared to 33% for those that had a matric, and 20% for those with a diploma or post-school certificate. But if one looks at the younger group of 20 to 24 year-olds, 16% are in school, 12% are in post-schooling education, 21% are employed, and 51% are unemployed and not in any education or training.

Considering that the percentage of black professional, managerial and technical workers in the 25 to 35 age bracket dropped by 2% over the past 20 years (meaning that this generation is less skilled than their parents), the statistics in the 20 to 24 age bracket indicates that this trend is likely to worsen.

Worryingly, studies show that countries, such as South Africa, that have a youth bulge and poor education attainment are likely to suffer from political instability. This is because if the demographic transition occurs in a stagnant economy with a high level of corruption then the low opportunity costs increase the likelihood of political violence by poorly educated young men.

South Africa’s current crisis is a systemic failure extending across national and local government. Although it’s possible that the political cost of corruption is now reaching unacceptable levels, reversing the effects of state decay on the poor will take short-run and long-run interventions.

Short-run measures will need to include holding public officials to account, reforming state-owned enterprises and reversing the numerous institutional weaknesses at all levels of government.

But public and private stakeholders will also need to formulate long-run policies that will improve the quality and through-put of the country’s junior and secondary education systems, and entrench youth employment incentive schemes. In addition, skills training will need to be reformed and reinvigorated, and the technical vocational educational system will need to be reconstructed.

If South Africa is to recover, then the country’s badly frayed socio-economic fabric will need to be restitched, not just patched.