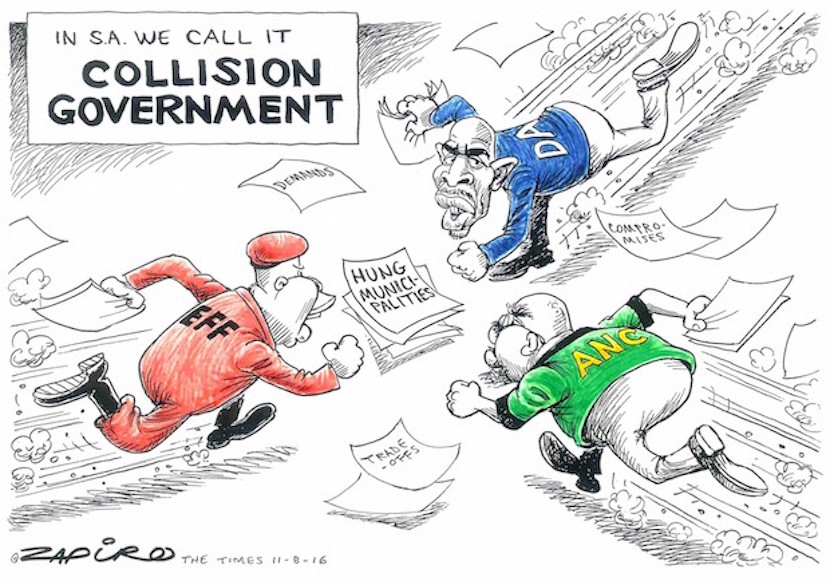 With ANC support declining in South Africa, it looked as though a new era of opposition politics in South Africa was dawning and that the country was moving away from a one-party dominant political system. This rise in support for smaller parties resulted in the ANC losing control of three metropolitan municipalities, the cities of Tshwane, Johannesburg and Nelson Mandela Bay. The Democratic Alliance that was already dominant in Cape Town entered into agreements with the Economic Freedom Fighters to rule the three cities. But apart from their united stands against Jacob Zuma, the two parties had little in common, to put it mildly. These coalitions and agreements that have always been precarious have since imploded with the EFF refusing to continue the role of kingmaker. Keith Gottschalk from the University the Western Cape writes in The Conversation that a mutual dislike contributed to the implosion in coalitions in the big cities and has suggestions on how to navigate the tricky waters of hung councils in South Africa. – Linda van Tilburg

Not that long ago South African commentators sympathetic to the country’s main opposition party, the Democratic Alliance (DA), were celebrating coalitions as the wave of the future.

I suspect that this flowed from their realisation that the DA would not in the immediate future win absolute majorities in many municipalities outside the Western Cape, rather than a clear-eyed take on coalitions as such.

The 2016 municipal elections saw the DA scoop a temporary triple propaganda victory. With a mixture of coalition allies and tactical voting alliances, DA mayors came into office in Tshwane, the executive capital of South Africa; Johannesburg, its economic hub; as well as Nelson Mandela Bay, the ANC’s historical heartland in the Eastern Cape.

But within three years these arrangements were in ruins. All three mayors have been voted out of office years before the next local government elections become due in 2021.

Coalitions are most likely to last if they are between parties adjacent on the political spectrum. In other words, when they are at least broadly in the same range on the spectrum.

In Germany, the Christian Democratic Union and the (Bavarian) Christian Social Union have been in stable coalition for six decades.

Other coalition configurations are possible, but more rare. Germany’s Christian Democratic Union and the Social Democrat Party have also recently formed a “grand coalition”, bypassing the Free Democratic Party, liberals who are in between.

In South Africa, the ANC is midway in the spectrum between the DA on its right and the Economic Freedom Fighters (EFF) on its left. But many leaders and members of these parties loathe the others, find their ideologies abhorrent, or find their corruption repulsive.

This arrangement has more than once scuppered coalitions agreed to between town councillors, when the planned arrangement angered their party national leadership.

The DA path to metro power included negotiating coalitions with three smaller parties. These were the Inkatha Freedom Party, the Congress of the People, and the United Democratic Movement. It also negotiated a vote-by-vote tactical alliance with the EFF. This included the DA mayor in Johannesburg, Herman Mashaba, agreeing to the EFF’s demand that Johannesburg should manage its rubbish collection service instead of outsourcing it.

Coalitions are not universally popular within political parties. For example, until now, the DA has considered it its duty to act as official opposition to the ANC, not to form coalitions with it. The DA’s own review commission, authored by former leaders Tony Leon and Ryan Coetzee, also specifically recommended that the DA should consult widely with its own members if it wanted to remain effectively in coalition with the EFF in Johannesburg and Tshwane, rather than return to the opposition in those two metros.

Putting things down on paper

Up until now, the DA’s coalitions have been negotiated but unwritten agreements between party national leaders. In future, John Steenhuisen, the interim DA leader, might want to consider written treaties, as is the case with German coalitions.

Such written treaties should include provisions for weekly or more regular joint negotiation meetings between party national and municipal leaders, and monthly or at least quarterly joint caucuses.

The ANC should also consider the same with its coalition partners.

Party national leaders might also have to be more flexible with permitting coalitions in different configurations in different municipalities. What happened in the past in two cases – in the small town of Beaufort West as well as in Nelson Mandela Bay – may become more frequent if protracted, hung councils are to be avoided in future.

In time, the same might become true at provincial level. South Africa faces an interesting two years ahead of the next local government elections.