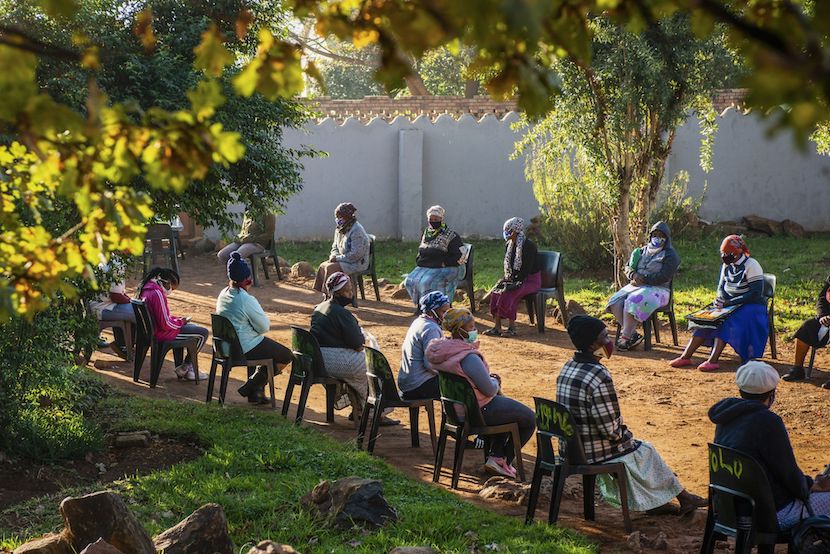 Here’s a senior citizen prepared to stake his life on the immediate lifting of the lockdown, which he’s convinced is wreaking devastation, starving underprivileged children and sullying our Constitution. Eustace Davie wants to start a movement of like-minded elderly citizens declaring that they don’t need Big Brother to look after them. As a member of a highly endangered generation, he says it’s his responsibility to protect himself as best he can from infection, nobody else’s. It’s a risk he’s prepared to take to live in a free country. He cites unemployment headed for the 10 million-mark, malnourished children being admitted to Chris Hani Baragwanath Hospital for the first time in decades, and mounting poverty and hunger. The lockdown is causing way more harm than doing good and he’d rather be six foot under than watch a government subvert its own constitution and subdue its citizens for ‘spurious’ reasons. A director of the Free Market Foundation, he asserts that the freedom of younger South Africans is inviolable and the lockdown merely an excuse to exercise command and control. The views expressed are his own. – Chris Bateman

Lockdowns will not end while politicians have the excuse of a supposed duty to impose tyranny on the entire population. Based on the excuse that they must, at all costs, keep high risk (mostly elderly) people safe, the government is trampling on the constitutional freedoms of the people, all the people, and causing more harm than the Covid-19 virus could ever do.

What is it about humans that causes them to meekly obey rules that cause them harm, deprivation, hunger and even death? I, as one of the older than 65 citizens considered to be at highest risk say: “FREE OUR CHILDREN AND GRANDCHILDREN!” Stop this insanity! I release you from any duty that you, as members of government believe you have, to apply unconstitutional measures to keep me safe. Such circumstances never exist.

I call on all old people, wherever you may be, all those with the wisdom of years, citizens of South Africa, for the sake of our children and grandchildren, to join me in speaking out against the unwarranted and destructive lockdown of the economy. The harm done is especially serious for people living in the former townships and informal settlements, which, in normal times, were a hive of activity with people trading with each other from dawn to dusk, but where trading has now been halted at the point of guns wielded by members of the police and army.

Many people living in townships across the country have lost their jobs as a direct result of the lockdown. The unemployment rate is scheduled to climb well above the 10 million mark. This devastation of lives must be stopped. For the first time in decades children suffering from malnutrition have been admitted to the Chris Hani Baragwanath hospital. Small businesses such as spaza shops and street vendors have been forced to shut down. There is poverty and hunger. Commuting, from homes to jobs, by bus, in kombi taxis, and otherwise, has come to a grinding halt.

How can we comprehend these actions on the part of a government that is in power because of a liberation struggle that lasted almost a century, bringing in the army to areas that exist because previous governments denied the majority of the population freedom of movement? Is the government “fighting” a virus or is it intent on subduing the people for other reasons?

The government has no right to deprive younger citizens of all ages of the rights guaranteed to them in our Bill of Rights supposedly to secure my safety and the safety of people like me. To put it bluntly, I would rather be six foot under than have government use such a spurious excuse for taking away the constitutional rights of my fellow citizens.

People of all ages with serious health problems that constitute high risk factors, are more likely to need hospitalisation or intensive care if they become infected with Covid-19, yet high risk victims in my age group are much more likely than younger people to die if they are infected with the virus. I personally sit a score of years above the entry level of the high danger zone. This qualifies me to speak out against the atrocity that is being visited upon my younger fellow South Africans.

Don’t misunderstand me. This virus can kill but it is not as dangerous as it was initially made out to be. Even if it were to be ten times more dangerous to old people than it turns out to be, it would not give governments the right to micro-govern the country and issue orders to all and sundry, especially young people, as to what they may or may not do. If becoming infected should place me in mortal danger of departing this earthly sphere, I must do my best to avoid infection. It is my duty, as a member of a highly endangered generation, to protect myself as best I can from infection. If I take unnecessary risks, become infected, and pay the price, it is my responsibility, not yours. It is a price I am prepared to pay to live in a free country.

The relevance of the considerable difference in the dangers facing the younger healthier, and older unhealthier, members of the population is the economic devastation caused by placing unwarranted and unconstitutional restrictions on the activities of younger people, who make up the majority of the population. It is not quite the equivalent of using a shotgun to kill a malaria mosquito, but it trends in that direction.

In conclusion, I make a plea to all older and wiser South Africans, to join with me in instructing the government, which is constituted by the people to perform, within the confines of the Constitution, its dedicated duties on behalf of and for the people, to immediately end the lockdown.