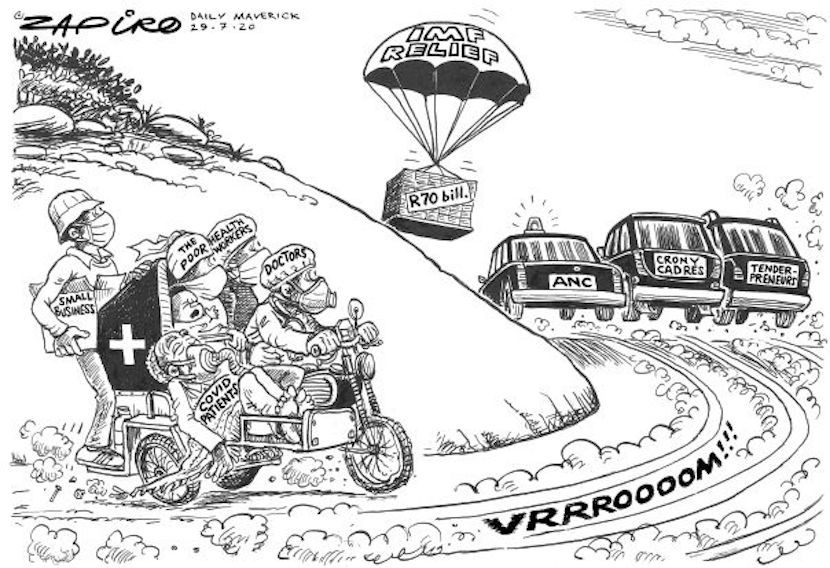 With widespread corporate and political corruption, South Africans of every colour and creed are wondering if President Cyril Ramaphosa will finally keep his word and crack down on those who cross the line. The plundering of Covid-19 funds and the government’s inability to prosecute criminals has many of us feeling a little bleak about this beautiful country’s prospects. In this no-holds-barred feature, Chuck Stephens of the Desmond Tutu Centre for Leadership asks the hard questions and demands honest answers. – Claire Badenhorst

Has Ramaphosa chewed off more than he can bite?

His police minister says that 230,000 new cases have been opened to enforce the Covid-19 protocols. Several complaints have appeared in the media suggesting that both police and military used excessive force to make sure that citizens got the message that the government was ‘serious’.

Now we find that there has been significant looting and plundering of the envelope of funding set aside for Covid relief – of all kinds.

It was one thing for the President to shrug and look away from crimes committed before he was in charge. But now it is happening on his watch; on a grand scale. This is the proverbial ‘acid test’. If he cannot deal with these Covid-baggers swiftly and decisively, then he will lose any credibility that he has left.

Read also: Join the conversation on Covid-19 and corruption

We need to see the law being enforced

Could we suggest to these two top leaders that they put the late, great Joost’s brother in charge of investigating and prosecuting these Covid-baggers?  He has a no-nonsense approach which the whole country is admiring – deadly force. When three burglars entered his church – during worship – and started to rob people in the congregation and to beat the pastor, Pieter van der Westhuizen shot two of them; point-blank. In self-defence.

The ANC shows no such courage or determination to end crime. It behaves fatalistically.

Maybe it is even time to bring back the death penalty?

‘If your right hand offends you, cut it off.’ We need decisive enforcement of the law. For we do not worship the two thieves who were crucified with Jesus – we worship Him.

What about a farmer who grows crops on peri-urban agricultural land being ordered by a Magistrate not to close his gate? People have been seen walking and driving into his property and stealing. He reported this to the police but they did nothing more than issue a case number and appoint an investigating officer. It ends there, even when there are witnesses.

The perpetrators have rights too, after all! Stealing water is OK because they have a constitutional right to water. Let the farmer pay and replace the other assets burgled because they are poor and he is rich. They are historically disadvantaged and he has always enjoyed the advantages.

Article 22 of The Fencing Act is clear. It is an offence to pass through a gate in a farming area, without closing it behind you. Does the Magistrate’s order to leave the gate open trump the law which says that to do so is an offence? This kind of judicial overreach is eroding the confidence that citizens have in the Judiciary.

What about a tenant who lies under oath in the founding document of her dispute with her landlord? He can produce documentary evidence that what she states in her Summons is untrue. But he is male and she is female. He is older and she is younger. So, the court does what it always does so well, it delays the case ever coming to trial, ad infinitum.

Brazil’s ex-president was convicted for corruption and sent to jail. It happened in South Korea too, and just this week in Malaysia. But in South Africa? Delays, and more delays. Fifteen years later, the ex-president is still being protected by ‘due process’.

Citizens are tired of this. No one is above the law. And the law must not take forever to reach a decision. This is Justice-abuse.

The one hope that people have left is a new political party, one that runs on a platform of ‘No Impunity’.

The police are for sale, and everybody knows it. The prosecutors are for sale, as the new NDPP is finding out. When she says that matters are a lot worse than she expected, that is what she is talking about. The Magistrate’s Commission says that 50 magistrates have been caught taking bribes (those are the ones who got caught!) So, if magistrates are for sale, then who can doubt that the same is true of court clerks and immigration officers?

At all levels, this problem is getting worse, not better. Ramaphosa has one last roll of the dice to convince voters that he means business about fighting corruption, or else the honest people will vote with their feet and move to another party, reducing the slim 7% margin that he won with last year.

More people in the electorate did not vote (19 million) in 2019 than the number who voted (18 million). This is because voters withheld their consent. They are waiting to see if Ramaphosa is any different, or if the cancer in the ANC has metastasized all through the ruling party.