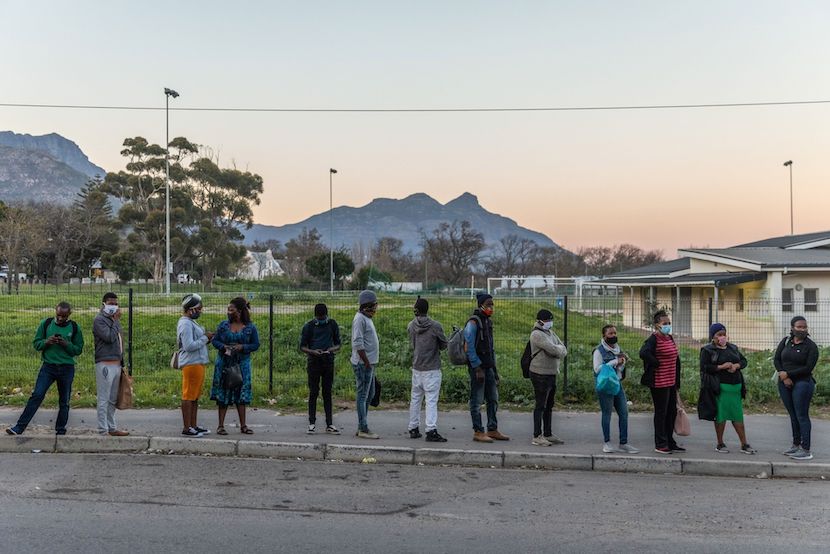 Cape Town’s Covid-19 cases are steadily declining. While many believe social distancing, thorough hand washing and the wearing of masks has resulted in this fall in cases, many believe it has to do with something else. In this letter to BizNews, Dr Roy Breeds puts forward an alternative reason to the declining numbers: Herd Immunity Threshold. BizNews welcomes contributions from visitors and encourages debate on a wide range of topics. – Jarryd Neves

I read the article in Biznews of 30 July 2020 entitled “Cape Town puzzled over easing of its coronavirus crisis”. In the article it states that authorities do not know why the Cape Town coronavirus crisis is easing. The article notes that numbers are declining despite most businesses having re-opened. The article states that the trajectory of the disease has got many people puzzled. A theory put forward for the decline is that people are adhering to social distancing and wearing of masks.

I would like to suggest a more plausible explanation for the trajectory of the epidemic in Cape Town. Social distancing measures are unlikely to be the correct explanation at this phase of the epidemic since far more social contact and intermixing are occurring now than was the case during level 4 and 5 of the lockdown and yet the numbers are still declining. So we are seeing declining numbers in the face of less stringent social distancing now compared to a few months ago.

I believe that there is only one plausible explanation for the decline in coronavirus numbers in Cape Town, and that is that the herd immunity threshold (HIT) has been reached in the Cape Town region.

I am not an epidemiologist and I have made these inferences based on my own reading. There are two scientists who provide valuable insight into this and they are Professor Karl Friston of University College London and, in particular, Professor Sunetra Gupta, Professor of Theoretical Epidemiology at the University of Oxford.

In a recent article in medRxiv (15 July 2020) and interview with Reaction Life (21 July 2020) (see links below) Professor Gupta notes that a significant fraction of the population may have innate resistance or cross-protection from exposure to seasonal coronaviruses, making the proportion vulnerable to infection with SARS-CoV-2 much smaller than previously thought. Some people are resistant to infection by SARS-CoV-2.

Professor Friston also describes a large proportion of the population as being resistant to infection by SARS-CoV-2.

Professor Gupta describes the herd immunity threshold (HIT) as the point at which enough people are immune to the pathogen that the rate of growth will start to decline, though there would still be more cases. She demonstrates that the HIT may be greatly reduced if a fraction of the population is unable to transmit the virus due to innate resistance or cross-protection from exposure to seasonal coronaviruses. Significant reductions in expected mortality can also be observed in settings where a fraction of the population is resistant to infection.

Maintaining the proportion immune above the threshold of herd immunity prevents the virus from spreading within a population. Infections continue to increase until the HIT is reached. Thereafter the incidence of new infections will fall (there will still be more cases, so the numbers will overshoot the HIT, but the rate of growth starts to decline).

If interventions, i.e. lockdowns and social distancing measures, are successful at preventing the proportion exposed from exceeding the HIT, this will leave the population open to further growth in infections once these measures are lifted. As can be seen in the case of Cape Town, the coronavirus numbers are declining despite easing of lockdown measures. So we are seeing declining numbers in the face of less stringent social distancing now compared to a few months ago. The decline can, in my opinion, only be explained by the herd immunity threshold (HIT) having been reached in the Cape Town area. A large section of the Cape Town population have already been exposed to SARS-CoV-2 during the first and second quarters of 2020, both prior to, and during, lockdown. Those exposed have either become immune (with or without detectable antibodies) or were resistant to start with, and a very small proportion of those infected have died. It is known that the vast majority of infections are mild or asymptomatic and go unnoticed. Conversly if the HIT had not been reached, the rate of growth would not have slowed and the numbers would not be decreasing.

Read also: Covid-19: We are now making it up as we go along – Prof Alan Whiteside

By the same reasoning, we shouldn’t see a huge surge in infections in the future. Professor Gupta notes that it is reasonable to assume that exposure to SARS-CoV-2 itself will confer a significant degree of clinical immunity. The authorities are concerned that we remain at risk of new flare-ups and an acceleration of cases. However, considering the above explanation, the risk and scale of any resurgence will be lower than currently perceived. I don’t think that Cape Town will see a big surge in Covid-19 infections again. There will always be new cases as the virus mops up any leftover susceptible hosts and becomes endemic. The virus cannot be eliminated and, going forwards, we will need to accommodate SARS-CoV-2 and live with it in the same way we live with other viruses.

In summary, my understanding of Cape Town’s trajectory is as follows: when lockdowns are lifted, there is not an inevitable significant spike in infections since a substantial proportion of the susceptible population have already been infected. Instead the trajectory of the epidemic is similar across all affected countries, i.e. the numbers peak and then come down. This indicates that the virus has burned through the susceptible population, has largely used up its susceptible hosts, and is indicative of the buildup of population immunity. In other words the virus saturates and fades as people become immune.

The above explanations will also be applicable to other regions and cities in South Africa, e.g. Johannesburg, as they follow in turn in the footsteps and trajectory of Cape Town.

In other countries that are well past their peaks and are experiencing low or declining coronavirus numbers, their leaders, health ministers and news media, instead of unconditionally welcoming this for the good news that it is, choose instead to continue to stoke the fires of fear amongst their citizens. And they do this by diverting attention to the so-called second wave or second surge. They continually remind their population of what they erroneously perceive to be this ever-present risk and in doing so, their people remain overwhelmed by fear.

In our own country, as we observe the declining numbers in the Western Cape and the downward trends in other parts of South Africa, both our national and provincial government have already raised concerns of a so-called second wave and a second bigger surge.

Read also: MSCs: The wonder cell that could be the treatment that beats Covid-19

Proponents of so-called second waves are overlooking the fundamental fact that we have an efficient immune system. They also work on the highly unlikely assumption that only a small proportion of the population have already been exposed to the virus. They are failing to consider the cardinal, central and protective role that the development of immunity is playing, and will continue to play, in shaping the course of this epidemic and in determining the outcome. Considering that the trajectory of the epidemic is critically related to the herd immunity threshold (HIT) and that the declining Covid-19 numbers in a region are indicative that the HIT has been reached, it is reasonable to assume that both the risk of, and scale of, any resurgence will be lower than currently perceived.

Declining case numbers in a city or region, e.g. Cape Town, are not necessarily indicative that one has evaded or escaped exposure to SARS-CoV-2. On the contrary, they are an indication of widespread exposure to the virus and that the disease, in that region, has largely run its course. Those exposed have either become immune (with or without detectable antibodies) or were resistant to start with, and a very small proportion of those infected have died. It is known that the vast majority of infections are mild or asymptomatic and go unnoticed. So declining case numbers are reason enough to allow our fears of this virus to subside and are cause for unconditional and great optimism since they are indicative of herd immunity and that the worst is over, and not still to come.

Herd immunity means population levels of immunity, so an individual becomes immune and becomes unavailable for infection. So what builds up in the natural course of an epidemic is immunity at a population level. So the risk to an individual of catching the virus becomes low enough that we can manage it. In places where SARS-CoV-2 has already spread and disseminated (e.g. Cape Town), these areas are now protected in the sense that people have built up enough immunity and created a situation where the virus can no longer spread. In these places it is implausible to contemplate that a so-called second wave would be worse than the first wave. We shouldn’t see a large surge in infections in those regions where we’ve already had a major incidence of infection

There will always be new cases as the virus mops up any leftover susceptible hosts and becomes endemic, but this should not be viewed as a second wave. This is merely the natural continuation of the first wave of a virus that is destined to become endemic. We have never eradicated any virus other than smallpox. SARS-CoV-2 cannot be eradicated, not even through vaccination (should this become available), and therefore ongoing low levels of infection, with some increases from time to time, merely represents a low-level state of equilibrium. It is how we will accommodate and live with SARS-CoV-2 in the same way we live with other viruses. This is not a reason to live in perpetual fear of “second waves”, nor is it a reason to reinstitute lockdown measures, since the risk of, and magnitude of, any resurgences will be lower than is currently perceived.

Professor Gupta once again reiterates that “nations should follow both in the practical recommendations and the rhetoric of Sweden”.

To broaden one’s perspective on coronavirus epidemiology it would be invaluable for all South Africans to read articles by, and watch interviews with, Professor Sunetra Gupta. Perhaps Biznews could arrange an interview with her so she can share her insights directly with us.

The links to the articles and interview: