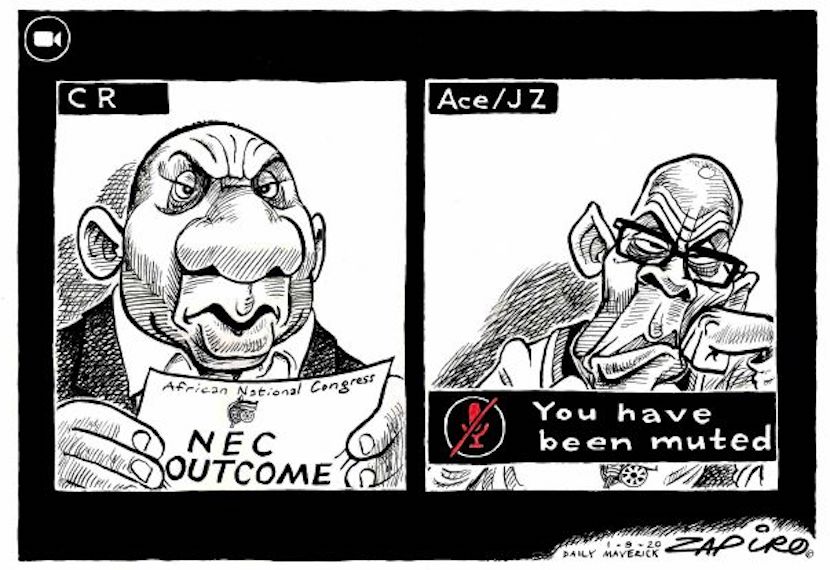 Corruption is a significant deterrent to foreign investors as well as locals who are pondering whether to put more of their resources into building businesses at home. It has dominated the headlines, with the Zondo commission reminding us of the industrial-scale state capture in the Jacob Zuma years and Covid-19 procurement scandals highlighting that it continues. Anthea Jeffery of the IRR picks up on anti-corruption talk by President Cyril Ramaphosa, asking out loud whether his “manoeuvres have simply been a manipulative attempt to defuse the #VoetsekANC campaign through the use of smoke and mirrors”. This article was first published on The Daily Friend. – Jackie Cameron

The IRR estimates that 41 out of the 80 elected members on the National Executive Committee (NEC) of the African National Congress (ANC) have been implicated in serious incidents of corruption. Eight NEC members have not been implicated at all, while it is difficult to make an assessment of the remainder. Contrary to public perception, the 41 who have been linked to corruption are split between the Jacob Zuma and Cyril Ramaphosa camps, not confined to the former.

This explains why the recent NEC statement supposedly ‘drawing a line in the sand’ against corruption (and other crimes) puts so much emphasis on internal party processes, rather than the criminal justice system.

In general, ANC members who have been implicated in corruption, but have not yet been charged with a criminal offence, must simply appear before the party’s integrity commission. This, of course, has no significant investigative powers. It certainly cannot implement the dawn raids which the Scorpions mounted against Mr Zuma in 2005 – and which netted some 93 000 documents vital in confirming and expanding the criminal case against him.

At present, moreover, the commission’s recommendations are not binding unless they have been endorsed by the NEC. This situation is under review, says Mr Ramaphosa. However, an NEC that is itself so deeply compromised is unlikely to give the commission any greater decision-making powers.

It is only where ANC members have been charged with corruption (or other crimes) that the individuals affected will be expected to ‘step aside’. According to Sibongile Besani, Head of ANC Presidency, these members will not be expected to resign as they must still be ‘given the chance to clear their names’.

Asking these members to step aside, Mr Besani stresses, is nevertheless a significant response from the ANC to public anger over corruption and constitutes an important ‘step in the right direction’.

People who have stepped aside, he explains, cannot in principle continue to perform their normal tasks as deployees of the ANC. But how precisely this will affect their other duties – for example, as members of national or provincial legislatures – is a matter of detail to be decided by the office of ANC secretary general Ace Magashule.

Take, then, Zandile Gumede, a former eThekwini mayor, who is facing charges of corruption and may perhaps (media reports remain unclear) have stepped aside from her membership of the KwaZulu-Natal provincial legislature – a position to which she was appointed in mid-August 2020. She remains a member of that legislature and will, it seems, continue to draw her usual MPL salary of some R1.1m a year. Which suggests that ‘stepping aside’ is a euphemism for a paid holiday, rather than a real punishment.

How many of ANC members are likely to be charged with corruption and then compelled to step aside? Major prosecutions of NEC members are unlikely, as this would decimate the organisation’s senior leadership and generate a real risk of the ANC’s collapse.

Major prosecutions of less important figures are unlikely too, if only because the National Prosecuting Authority (NPA), according to its head, Shamila Batohi, remains badly damaged by the hollowing out of its capacity under the Zuma presidency and still lacks adequate funding and skills.

Moreover, when the ANC insisted, in the drafting of the 1996 constitution, that the formerly decentralised and independent provincial attorneys-general be brought under the control of a National Director of Public Prosecutions appointed by the president, it did so to turn the NPA into a shield for itself and a weapon against others. That impetus has not changed.

In addition, the most common malfeasance within the ANC is probably the major inflating of prices by BEE tenderpreneurs in contracts with the government at every level. This is not confined to the recent Covid-19 contracts for the supply of personal protective equipment (PPE) and other goods and services. Rather, it generally afflicts some 50% of the state’s R800bn public procurement budget – as the Treasury’s acting chief procurement officer Willie Mathebula told the Zondo commission at its start in August 2018.

Take the example of Ace Magashule’s son, who reportedly bought a BMW worth R2m a week after his company (of which he is the sole director) won a major contract to provide soap and masks for the Free State provincial administration.

How easy would it be to prosecute Ace’s son for corruption? South Africa has an extraordinarily convoluted and supposedly highly comprehensive anti-corruption statute in the form of the Prevention and Combating of Corrupt Activities Act (Precca) of 2003.

If Ace’s son could be proved to have paid a bribe to an official in the Free State provincial health administration in order to obtain the contract, he could be convicted of corruption under Precca and sentenced to a lengthy prison term. He could also be fined an amount ‘equal to five times the value’ of the bribe.

But it seems unlikely that Ace’s son would have had to pay a bribe to secure his contract. Far more probable is that he simply benefited from the well-established and long-standing practice within all ANC-administered organs of state of paying politically-connected BEE ‘tenderpreneurs’ vastly inflated prices for the goods and services they supply.

Precca also prohibits the provision of other benefits, advantages, or ‘gratifications’, which it defines very broadly. It further bars the ‘aiding and abetting’ of corruption. In addition, it has complex rules on the investigation of monies or other properties that are reasonably believed to be the proceeds of corruption because they seem ‘disproportionate’ to their possessor’s known sources of income.

All these provisions should help to prove corruption in Covid-19 contracts – especially where prices were greatly inflated above market norms or companies were created only after the lockdown began and seemingly for the sole purpose of netting lucrative PPE and other contracts. However, generating sufficient proof in a large number of cases may not be easy to achieve for either the under-resourced NPA or the politically tainted and often inept Hawks.

If only a small number of prosecutions were to be mounted, this would not suffice to disrupt a well-established pattern of procurement abuses. And if selective prosecutions seemed to target one faction rather than another, this would further divide the ANC – an outcome the NEC would be anxious to avoid.

In practice, thus, criminal prosecutions under Precca may help little against either the Covid-19 contracts or the wider BEE feeding frenzy – in which tens of thousands of ANC cadres at all levels of government routinely milk the state’s massive annual procurement budget under preferential procurement rules.

The real problem is that the ANC has succeeded in portraying BEE preferences in state procurement as a vital means of providing redress to apartheid’s victims. This is cynical in the extreme, for the main beneficiaries of preferential tenders, as the ruling party well knows, are the political elite, not the unemployed and destitute.

On this flawed basis, the ANC has given political and moral legitimacy to the massive looting of the state. Yet many of the commentators incensed at corruption seem reluctant to see through this stratagem – or to acknowledge that the only effective way to end the looting is to abolish BEE in public procurement.

The country – and especially its poorest citizens – need the maximum benefit from every tax rand used in procurement. Which means that every contract must be concluded on the accustomed criteria of price, quality, and proven capacity to deliver – not skin colour, gender, age, or any other extraneous factor.

President says those in ANC who are facing corruption charges must step down. What if they don’t Cyril? What are you going to do?? What steps will you take if any??

Was it a victory?

How much of a victory, then, has Mr Ramaphosa won against corruption? Both he and the NEC have drawn attention to the ‘choreographed campaign’ which the president has supposedly been steadfast in resisting. That this campaign was choreographed is clear. But for what reason this was done is less apparent.

The ostensible attack on the president was most probably orchestrated to create the impression of ‘CR’ being under siege. This would help counter mounting criticisms of his weak leadership, raise fears he might be ousted, and rekindle his flagging support.

If this is so, then the praise now being heaped on Mr Ramaphosa by some commentators is richly undeserved.  On the contrary, his manoeuvres have simply been a manipulative attempt to defuse the #VoetsekANC campaign through the use of smoke and mirrors.