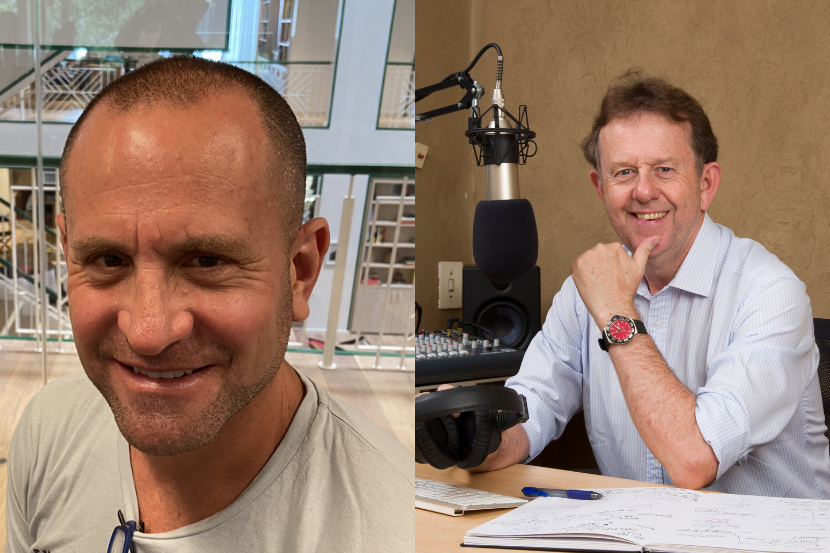 Gidon Novick has packed more into his life than most do in three. An untraditional chartered accountant (and MBA), nine years after stepping down as CEO of Comair, he’s jumped back into the industry he was born into. The now 51-year old Novick explains what he has learnt from a global education, decades in the airline business, and a spell doing a supposedly dream job at SA’s innovative financial services group Discovery. And how he is using this experience to help LIFT, SA’s newest airline run by a graduate of car-hailing software business Uber – and like a gig economy company rather than the hierarchical structures of corporates which dominate the space. – Alec Hogg

Gidon Novick on his background:

I grew up in Johannesburg. In a very interesting family. My dad was in business and I was quite interested in that. He was in the airline aviation related industry. I got interested in airplanes from an early age.  Weekends were the best because we would get on an old DC-3 – a Comair DC-3 – and fly off to Skukuza or Phalaborwa and spend the weekend in the game reserve. It was really fun.

I’ve got two brothers and a sister. The three boys were nuts about flying, so we all learned how to fly. It was just business for my dad. We got into flying and still love flying. I had a license, just a private license – but I still get super excited about getting on a plane every single time. I love it.

I was a good student. I would get bored, for example, in matric. I studied hard – but I didn’t study too hard. I studied hard enough and I knew I was going to do fine. I get bored at a point in time with things. The same would have been with studies. When I knew enough, I wanted to move on to the next thing.

I went to Wits [and] had a great experience there. It was social, it was fun. One of the interesting parts of my university experience was that they started a programme in the Commerce Department, that you had to choose one non-commerce subject. I chose international relations. That was the best course I did throughout my academic career. I realised yes – accountancy, economics, commercial law – it was nice to learn them. But to learn something outside of that was just really interesting to me.

It made me realise a lot about education and that as young people, they don’t really know, generally, what they want to do. Just to explore the fascinating aspects of the world that you would never have been exposed to, highlighted my curiosity about the world.

On his MBA at Kellogg:

That was fascinating. I did a trip to the US and went to quite a few of the campuses there. It was quite an eye-opener, just understanding the educational system there. It was really good. It was international. So Kellogg – which is based in Chicago – is an international MBA programme, part of Northwestern University. It’s in Chicago, which has  freezing winters and boiling hot summers.

But it was just an amazing experience, to get into the world of American business and see all these iconic companies. I was interested in the airline industry, so the company that I was particularly interested in being exposed to was Southwest Airlines, which was this airline that even today is, streets ahead in terms of innovation and business model culture.

South Africa, to me – and especially having that exposure in the US – was always like there’s so much that can be done in South Africa. There are so many ideas. That was almost like the birth of Kulula. Technology and building a culture. All these things – these ideas – were popping around my head. It was always around what a brilliant place this can be, because we have the basic infrastructure here.

On getting involved in the family business:

I wanted to work with my dad. He was quite ambivalent about it. He was worried about South Africa at the time. It was kind of the later years of Mandela. He said I should think about staying in the US. I said, ‘no, we’re coming back here. We want to start a big family and it would be difficult to do that in the US. I want to work with you and I want to be in South Africa’. I love South Africa. This is the place that I grew up in. It’s a place that I’ve benefitted from. I’ve been privileged. I’ve had a huge relative advantage over most other people in the country. I want to get involved. I do want to give back. Selfishly, I want to live in a beautiful place.

Jonathan Ayache, who’s running Lift, is a young guy. He’s not even forty and he’s brilliant. I just trust him implicitly to make the right decisions, but always inclusively – including me as a founder and his team in an incredible way. There’s no ambiguity. He will make the decision and things get done.

I met Jonathan at Uber, because we were working collaboratively with Uber to get food out to people and to get the message out that we needed help on the food rescue side. A few months later, he left Uber and he called me and asked if we can talk. I was chatting to him about lots of different business ideas. He was sitting at my house and I remember he was actually getting up to leave.

This was only six [or] seven months ago. I said, ‘I’ve been thinking about this airline thing and [it] might be a good opportunity to get back in. Global Aviation is a partner’. His eyes lit up, and I said ‘surely you wouldn’t be interested in getting involved in an airline? You’re a smart guy’. He said, ‘actually, it sounds very interesting’.

We don’t want it to try and be something that it may not be. The people that we hiring are a reflection of that. These are just people that have had good careers. They’ve had ups and downs, and they’ve jumped on board and are giving it everything they have.

The one thing we really do want to do, is translate our understanding of travel – which is actually a stressful thing. Travel, for most people, is not when you’re sitting on a beach somewhere. But the process of travel – and air travel in particular, especially now with covid – is stressful. Am I going to be safe? Am I going to be up for costs that I didn’t anticipate if I have an extra bag or if I have to change my flight?

We’re going through those issues, point by point, and trying to take them out. That’s why flexibility was an obvious one. Jonathan’s strategic thinking – coming from outside of the industry – says, ‘what’s this business of wanting to change my flight and having to pay extra fees? And if I want to cancel, I can’t cancel. What’s that all about?’ Let’s just reengineer the process of changing and cancelling flights. That’s what we’re building the brand around.