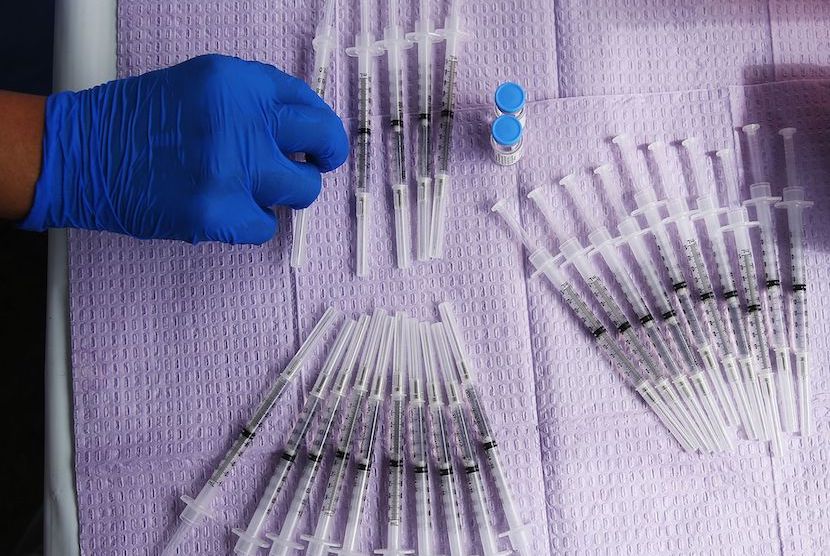 Originally published by the Helen Suzman Foundation, the piece below by Research Fellow Matthew Kruger addresses the argument surrounding mandatory vaccines, a hot topic of late. In the United States, President Joe Biden has sparked controversy following a mandate which essentially orders federal workers to receive the jab – or face disciplinary consequences. What’s more, the 46th President of America has reportedly called on all 50 states to apply vaccine requirements in school. Back home in South Africa, President Cyril Ramaphosa has decided to stay away from a decree as controversial as Biden’s, with BizNews founder Alec Hogg noting in his premium newsletter (sign up here) that “Unlike his American counterpart, Ramaphosa “gets” this and has stayed away from decreeing mandatory vaccinations”. Below, Kruger also touches on this, noting that SA’s leader said that rather than forcing inoculation on people, persuasion and encouragement must be used. “A good liberal stance,” as Kruger describes it. The Research Fellow notes that, for the last year and a half, those with power (both on the left and right) have “united” around the virus. “They accept as legitimate an indefinite state of disaster; see no alternative to lockdowns; and offer only superficial objections to the substitution of Patriarchy for Parliament”. Kruger gives two examples (one from each side of the political spectrum), who have responded to “people who, after criticising official narratives about Covid-19 or lockdowns or vaccines, become infected by and suffer from, and sometimes die with, the disease”. – Jarryd Neves

Whatever the cold wisdom of a policy mandating vaccines, Matthew Kruger argues in this brief, it is a shared narcissistic disgust of others that motivates the present move towards it.

Such is the hegemony of the United States of America that, whenever something of significance happens there, it always inevitably becomes a talking point and rallying cry for action amongst our political, economic and cultural elites.

Last week, their attention fixed on the US Supreme Court. In a split decision, the court refused to grant an order interdicting the implementation of an incoming Texas law that, in effect, makes abortion unlawful after 6 weeks of pregnancy.

Whilst legal precedent should prohibit this, the law is ingenious in its attempt to elude this hurdle. In effect, it outsources to citizens the state’s coercive power. Instead of criminalising abortion, it gives ordinary people the right to sue women who undergo the procedure, and anyone who “aids or abets” them. As one dissenting judge put it: “The Texas Legislature has deputised the State’s citizens as bounty hunters, [by] offering them cash prizes for civilly prosecuting their neighbours’ medical procedures.”

The decision outraged our commentariat. Rightly so. It is repressive and regressive. But with their eyes fixed on the sun and moon, they overlooked what was under their feet.

For also last week, Ramaphosa said that nobody should be forced to be vaccinated. We must use persuasion, he mused, to encourage people to take it. A good liberal stance. But, as is his wont, he equivocated. In the same breath, he spoke about a “delicate balance that needs to be struck”. He explained by way of an example: “The situation poses challenges for employers who want to keep their workers safe from Covid-19, while [also] respecting the rights of those who don’t want to be vaccinated.”

Almost as though it were coordinated in the same week, Discovery announced that vaccinations will be mandatory for its staff. On script, Adrian Gore said that they recognise the right of staff “to object to the policy and being vaccinated”. So, the implementation of its mandate will involve consideration of an objecting employee’s “health, religious and other legal rights and will seek to balance these with the rights of all employees across the Group”. But to answer “the call to lead bravely” means “pushing” the vaccine on all.

Let us be clear. Confident it has government’s backing, what is effectively a healthcare monopoly has implicitly been empowered to prosecute, by way of threats of dismissal, employees’ decisions about a medical procedure. In effect, Ramaphosa’s equivocation has deputised private companies to do the state’s bidding, thereby insulating this most extraordinary power from the constitutional standards that attach to state action.

That this collusion of state and capital has not been met with outrage, at all, let alone equivalent to that generated by events faraway, is not a surprise.

For the last 18 months, those with power, on both the right and the left, have united around Covid-19. They accept as legitimate an indefinite state of disaster; see no alternative to lockdowns; and offer only superficial objections to the substitution of Patriarchy for Parliament. That so few seek to interrogate the legality, ethics or long-term wisdom of outsourcing coercive state power to the private sector, therefore, is precisely what we would expect.

Related to all this is one of the more upsetting forms that this unity of purpose has taken. This is their response to people who, after criticising official narratives about Covid-19 or lockdowns or vaccines, become infected by and suffer from, and sometimes die with, the disease. Here are two representative examples from each pole of the political spectrum.

Ivo Vegter is a libertarian commentator. Predictably, he imagines that companies are “perfectly entitled to discriminate on the basis of vaccination status, should they so desire”. Last week, he said this about a vaccine critic’s death: “RIP Marc Bernier, vocal antivax radio show host. Died of Covid-19. Should have got the shot.” This was not out of character for Vegter. Pressed about his taunting of the dead, he replied that when people with influence do “stupid things … I’ll mock them when those things kill them”.

As crude as Vegter may be, he exudes empathy and is a paragon of humility when sat next to his ideological opposite, the legal blogger Pierre de Vos.

In the past, De Vos has portrayed himself as a critical theorist, meaning, someone who works in the spirit of Foucault, and therefore tries to unmask hidden structures of power. Despite this, for 18 months he has retweeted, and commented on, articles about the suffering and deaths of people who, coherently or not, have opposed the global complex of power structuring the world’s near-uniform response to Covid-19. Scroll through his Twitter feed and despair. Though more subtle than Vegter, this just adds to the coldness of a schadenfreude better suited to the Westboro Baptist Church than the Claude Leon Foundation Chair in Constitutional Governance.

What makes this attitude, which is hardly unique to our elites, so distressing is that it betrays a lack of basic humanity. That those suffering are authors of their own misfortune is never a reason to laugh at or curse them. Neither glee nor hate is proper. Even if another’s pain or death just leaves you cold, your character is defective. In art as in life, your response to these tragedies should be to empathise and cry out, “My god, why, what have you done?”

The public displays of contempt by these men reveals something important about the forms taken by today’s right and left. For as much as they stand opposed at the level of appearance, they ally at the level of structure.

They are united by a constitutive narcissism, which is to say, a belief that what ultimately matters is the satisfaction or expression of present desires.[1] From this emerges their lack of compassion and disgust[2] for “the unvaccinated”. It is also to the root of their willingness to shed old principles for the sake of two more primitive ends: self-preservation and control.[3]

It is because the virus threatens their sense of security, with government policy since March last year affording left and right a narrative according to which they maintain a sense of control, that they embrace coercion and revel in death.

For those on the right, like Vegter, it may seem that their love of markets means that they embrace risk and the dispersal of power. But that is an illusion. As Michael Oakeshott said about Hayek: “A plan to resist all planning may be better than its opposite, but it belongs to the same style of politics.”[4] Or in the words of Hayek himself: “If we knew how freedom would be used, the case for it would largely disappear.”[5] So, if, like Vegter, you are so certain about what should be done that you mock the “stupid” in death, you probably won’t see any problem with stripping them of freedom in life.

Similarly for leftists like De Vos. For whilst they imagine that they follow Foucault in criticising power, they forget Foucault’s most important lesson: Whenever power is challenged, it is always for the sake of substituting the present power regime with a new one. Because leftists forget this, they see themselves as activists, allies in the resistance, not already-established centres of power. Consequently, they blindly function to preserve the status quo—their domination of anyone who steps out of line laundered through the language of “precarity” and “care”.

Once this is understood, we see that whatever the cold wisdom of a policy mandating vaccines, it is a shared narcissistic disgust of others that motivates the present move towards it.

Now more than 530 days into a 3-week lockdown, with flattening the curve having mutated into mandatory vaccines, those who would oppose this unholy alliance’s narcissistic abandonment of democratic freedom, must confront a difficult truth. The categories of left and right—as well as conservative, liberal and progressive—are exhausted. The virus has laid this bare. They should be set aside for good.

In favour of what? Not long ago, the uncontroversial answer was this: a democratic state founded on the values of dignity, equality, rights and freedoms.[6]

In the idiom of our exhausted elites, however, “in the middle of a global pandemic” such talk has become “dangerous”. They are half correct. It was always dangerous. But in finding stupidity or weakness everywhere they turn, they cannot see that this danger is good. For anything worth having is accompanied by the risk of its loss. All that gives life meaning is destined to pass away. And it is exactly this exposure and inevitability, or rather an acceptance of these facts, that makes possible a life of freedom.[7]

[1] See Christopher Lasch, The Culture of Narcissism: American Life in an Age of Diminishing Expectations(1979) and The Minimal Self: Psychic Survival in Troubled Times (1985).

[7] This idea is Heidegger’s but for a more accessible version, see Martin Hägglund, This Life: Why Morality Makes Us Free (2019).