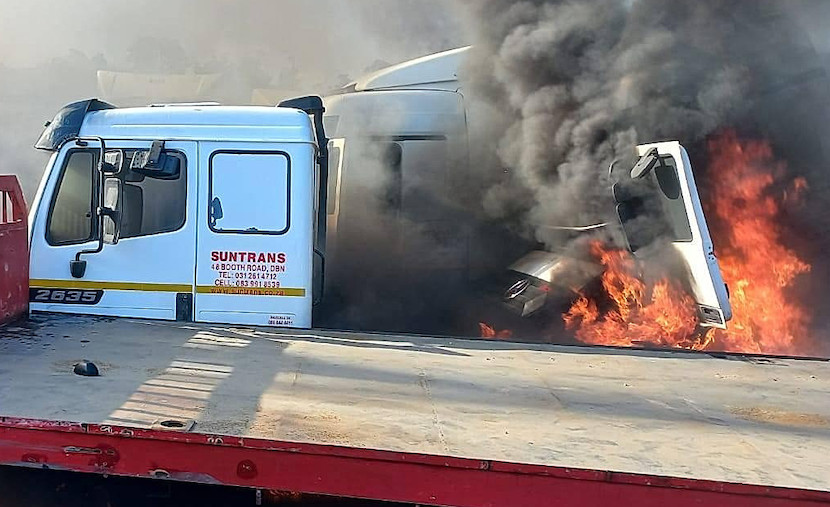 When chaos descended on KwaZulu-Natal and parts of the Gauteng provinces, absolutely nothing was safe. Angry protesters and looters took to the streets, myriad businesses (big and small) were destroyed, and thousands of jobs and livelihoods were lost. Earlier this year, The South African Property Owners Association estimated the July riots could cost South Africa’s already ailing economy R50bn. In cash alone, money stolen from ATMs and banks totalled nearly R120m, an astonishing figure. A silver lining in a very dark cloud were the pockets of citizens who came together to protect their businesses and homes. Sadly, not all businesses were afforded this protection. As protesters blocked the N2 and N3, hundreds of trucks were incinerated. Below, FleetWatch editor Patrick O’Leary tells the story of Sunesh Manilal, CEO of transport company Suntrans. Building his company from scratch, Manilal had to sit back and watch as his fleet of trucks  – his livelihood  – went up in flames. “I’ve tried hard not to let it get to me but there are times when my mind just can’t cope,” he says. – Jarryd Neves, Motoring correspondent

“I treated them like my babies. I’ve tried hard not to let it get to me but there are times when my mind just can’t cope. It’s heart breaking and I’m now trying to pick up a trillion pieces of emotions.”

The pictures of devastation – along with the video accompanying this article – will give an idea of the cause of the heartache experienced by Sunesh Manilal, CEO of transport company Suntrans. His ‘babies’ had been killed, burnt to death by marauding criminals.

This was not a company that came easily into Manilal’s hands. He didn’t inherit it or use the proceeds from a massive Lotto win to buy an existing company. No, it was one he had built up over 23 years from scratch. When he started out, he drove the trucks, he maintained the trucks, he looked after them. They truly were his babies. As the fleet family grew, he could no longer pay as much personal attention to each rig as he did in the beginning. Instead, he got others to do so, thereby creating employment. But he still knew every one of them intimately. And now, they were just mounds of ashes – 20 truck tractors and 25 trailers destroyed. 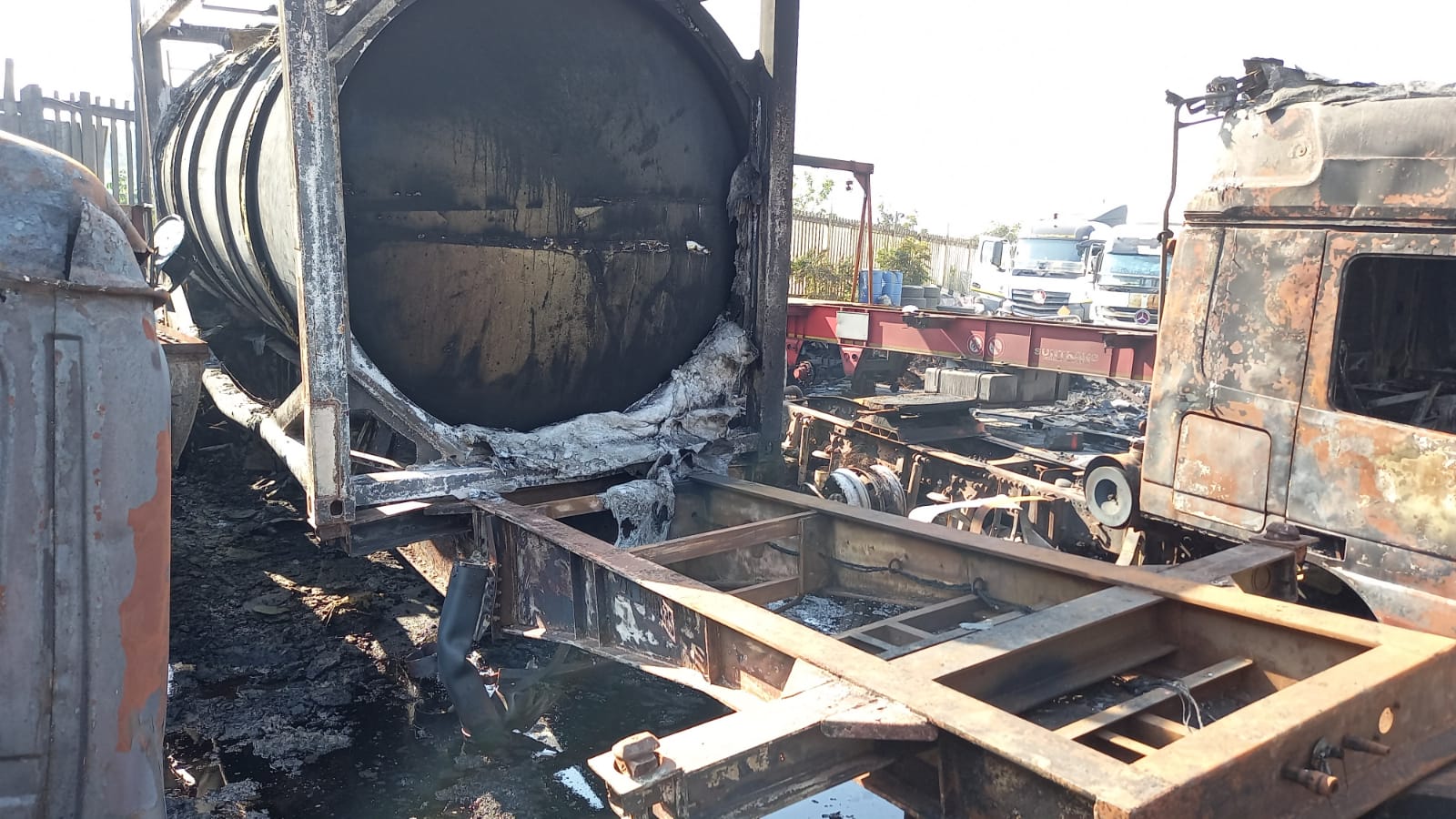 Those that were not burnt were vandalised, the inside of the cabs smashed to bits with crowbars. The containers loaded with goods for export and import were broken into, looted and burnt. A total of 25 containers were burnt “These are the tools of our trade so we can’t operate. We’re not able to function,” said Manilal. And that’s not all. The criminals vandalised the offices, the workshops, and either smashed or stole the equipment as well as all consumables.

There were between 200 to 300 looters and criminals operating from early in the morning of August 14th until the early afternoon – and it was organised. “The looters came on foot but there were commercial vehicles involved as the looted goods were loaded onto trucks and hauled away. So there was support.” This tallies with other transporters FleetWatch spoke to who also saw looted goods being loaded onto trucks and taken away. There were reports from other areas of criminals stealing trucks, driving them to warehouses that were being looted and using them to haul away the stolen goods.

Although the staff and drivers of Suntrans initially tried to defend the property, they had no chance. “I was afraid they would get injured because these people were running amok and I thus told all my staff to leave the premises. It was the right decision and I’m pleased to say that not one staff member was injured. The SAPS also had no chance. It was unmanageable. There were just too many of them.”

I’ve tried hard not to let it get to me but there are times when my mind just can’t cope. – Sunesh Manilal, Suntrans CEO

Some of the criminals were obviously knowledgeable about trucks. “Only someone who knows trucks would know that dual fuel tanks on a truck tractor are connected by a linked pipe and they cut the pipes underneath the tanks so they knew what they were doing,” says Manilal.

Manilal had just recently added seven new Mercedes-Benz Actros MP4s to his fleet. Five of the seven were burnt. And how’s this for irony. The debit order for one of the new Actros trucks that was burnt on August 14th came off on August 15th. First instalment.

At the time of us talking, the total monetary loss had not yet been calculated but Manilal estimated it as being around R50-million mark. That includes the truck tractors, trailers, containers, goods in the containers, offices, workshops and equipment as well as consumables but does not include the lost time and revenue from the company not being able to operate after its destruction. 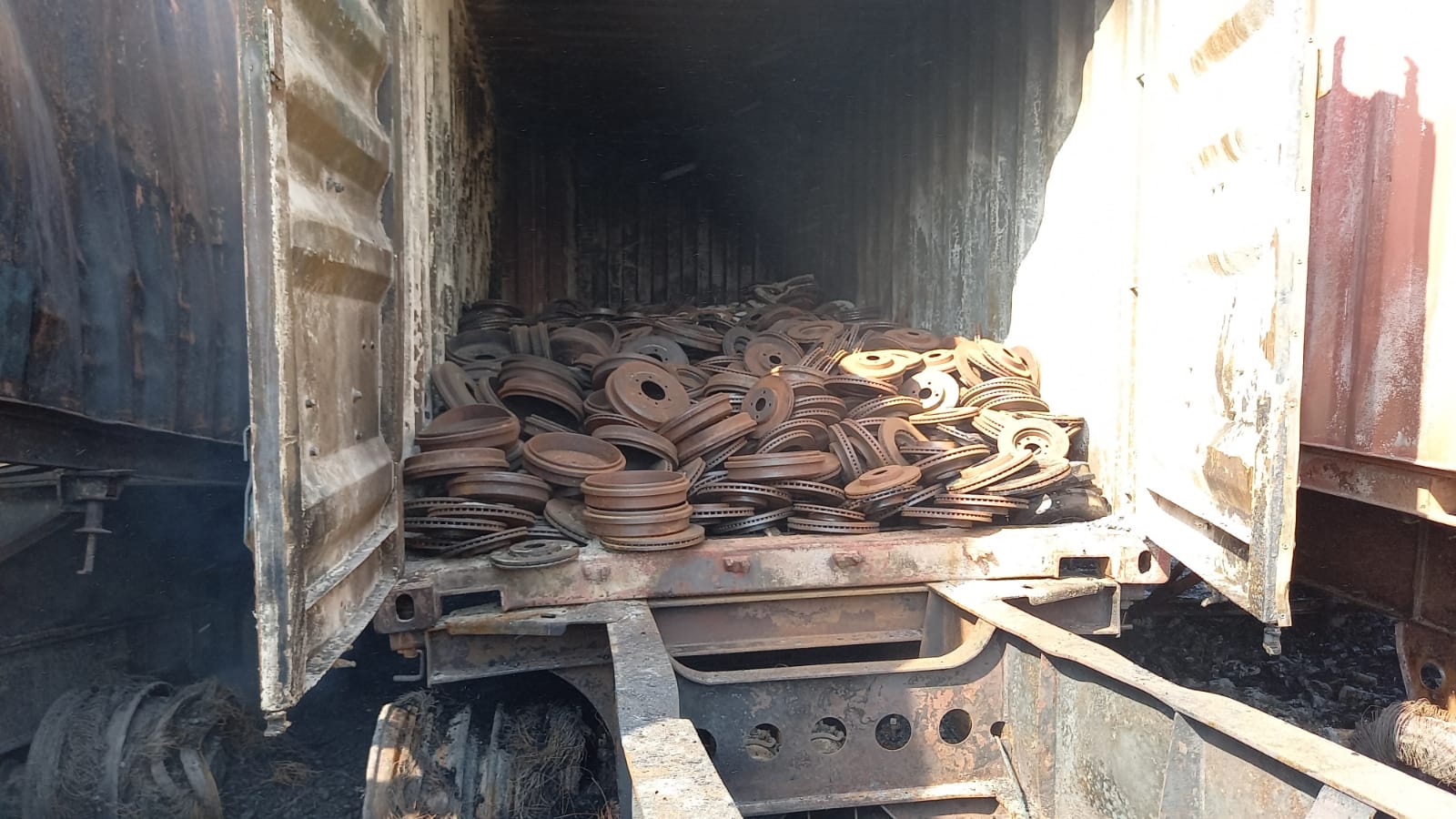 FleetWatch shares the heartache felt by Sunesh Manilal and it is our sincere wish that he can find it within himself to recapture the passion he had when he started the business 23 years ago and channel that passion into rebuilding this business from the ashes.

It may be going a bit too far but perhaps rename the company Suntrans Phoenix. This is not a reference to the suburb of Phoenix but rather to the bird associated with Greek mythology. In this mythology, the Phoenix is a long-lived, immortal bird that cyclically regenerates or is born again. Associated with the sun, a Phoenix obtains new life by arising from the ashes of its predecessor. Thus SunTrans Phoenix. But, maybe not given the controversy around the happenings during the unrest in the suburb of Phoenix. Whatever – just rise up from the ashes so that the Sun can once again shine on your transport business.