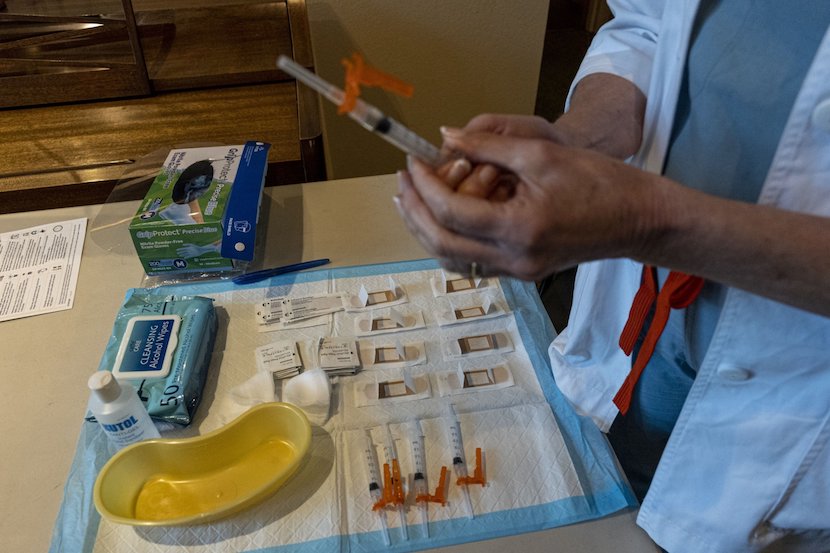 Recently, Sakeliga’s Piet le Roux and Russell Lamberti joined Alec Hogg to discuss mandatory vaccines and why the non-profit business group believes it is not the way forward. “We are for the rights of businesses to implement what is appropriate in their circumstances. There is no one-size-fits-all [answer] for everyone.” Both Le Roux and Lamberti joined BizNews Radio for an update, also touching on other topics, such as land expropriation. – Jarryd Neves

Our position is that the government should not co-opt and force the private sector to implement a one-size-fits-all solution. We are for the rights of businesses to implement what is appropriate in their circumstances, according to the normal tests of the market and profit and loss. There is no one answer for everyone. Even currently, with companies encouraging some of their staff to get vaccinated; some call it mandatory vaccines. But even there we have exceptions.

Currently, all those exceptions and the implementations are determined according to the discretion of the company. Once we have a government-introduced mandate, forcing the private sector to enforce its exclusionary policies, not only on employees, but private people visiting them in public spheres, we will have a division in society between business and the public. We will have the government draw lines, according to its discretion, between families, colleagues and businesses. That’s not the right way to solve this complex problem.

I think that’s a good, cautious approach from the government, to step back from it. [That] tells us, after a week of punting this idea, it has realised that we’re risking too much in doing this. We’re risking putting groups in society against each other, in a country that has just recently seen massive unrest, costing billions. In a country that has a history of distrust and it’s trying to rebuild that trust.

Now we’re introducing this. So I think it’s cautious and wise of the government to take a step back. Also, as things progressed, we’re still not even sure that all of this – which came from the detection of the Omicron variant – is justified by the variant itself. President Ramaphosa told us that the world acted irrationally by introducing travel bans [and I] completely agree with him. But let’s not act rashly and irrationally in South Africa on the back of the same information.

I don’t think it’s the end of the story. The 50% majority threshold was achieved but, of course, it needed a two-thirds majority threshold. That wasn’t achieved because the EFF, chiefly, and a few other parliamentary allies voted against the amendment; not because they think it’s because it engages in too much theft, but because it engages in too little scope for property confiscation.

What that means is that you’ve got a sizable faction within parliament that is going to try and reintroduce this amendment, or perhaps target the expropriation bill itself, which the amendment was shaping up to enable. They are going to try and radicalise that process and take this even further. The battle, perhaps, has been won in the short term but the war is far from over.

We’re remaining very vigilant on what parliament is doing and how they’re thinking because I believe there are many – not just within the EFF – but also within the ANC who want to press this even harder. What’s critical is the longer this stays on the table, it looms over the South African economy, investment decisions and other capital allocation decisions. It’s just this huge question mark.

As long as that question mark doesn’t go away, it is a real handbrake on things. We really need this to be dealt with, with more finality. Unfortunately, what is likely to happen is this is going to stay on the table and in the conversation. As long as that is the case, I think investors and businesspeople are going to remain nervous and vigilant.

On why Sakeliga opposes mandatory vaccines and lockdowns

We have been opposed to lockdown from the beginning. The irrationality; it was even worse than we expected it to be. We’ve been opposed to lockdown a lot. We have been speaking about that since the beginning, when the idea was still just three weeks to flatten the curve and then we’ll ride it out, because nobody thought there would be a vaccine at that point. The idea was always that society will have to live with this thing, [so we should] ready the hospitals. But then it metastasized. We came to a point where talks of mandatory vaccination and the co-option of the private sector [forced] the private sector to implement a one-size-fits-all solution across the board.

Some companies have and some companies haven’t. They have evaluated their situation, and we encourage you to evaluate yours. In general, I could add that I don’t think establishing a new corporate culture of vaccine mandates is wise because it encourages the monitored society. But we do not prescribe to our members what not to do. You have to evaluate your position, internalise the risk, the reward, the benefits and the profit and loss of your decision. Very often, just playing copycat in the market is not the way to distinguish yourself. Make a decision that is good for you, your employees, your stakeholders, your families and so on.