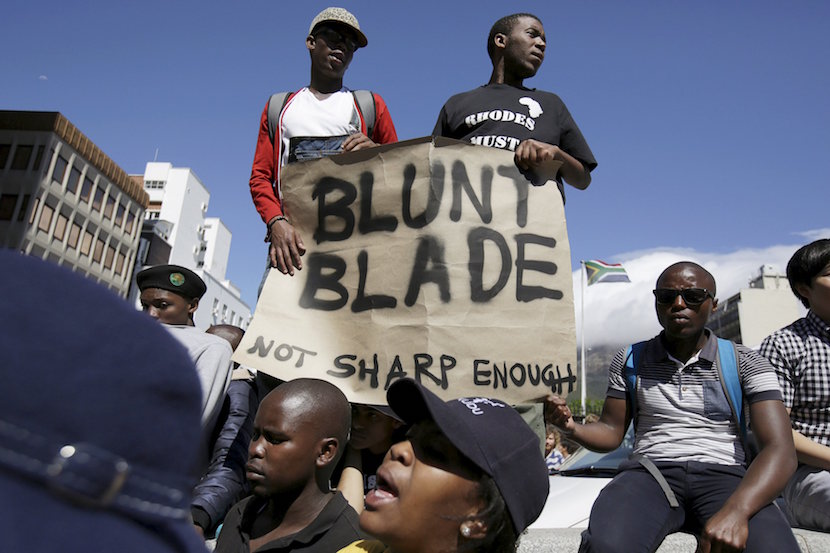 Writing off student loans and making tertiary education free (think Jacob Zuma’s last act as president and R800 million in #FeesMustFall campus anarchy) is disincentivising taxpayer theft. That’s according to Ivo Vegter in the Daily Friend here. Honest, hard-working, blue-collar workers end up paying taxes to educate white-collar workers, those who qualify and don’t drink and party their free ride away. It’s a popular vote-catching tool used in the USA and South Africa. As Vegter says, R800m could have paid for a lot of scholarships. Forgiving student debt reinforces the incentive to study useless subjects, instead of letting the market push people towards courses that society actually needs. The same is true for offering free education in the first place. A worthwhile read… – Chris Bateman

Tertiary education should not be free

In South Africa and in America, there is controversy over paying for tertiary education. Many people want it to be free and tax-funded, as it is in Europe. But non-market solutions are almost always a bad idea.

In the US, student loan cancellation is a hot partisan talking point. The president there, Joe Biden, has expressed cautious support for the idea of forgiving at least some student debt. Of course, the reason is entirely political. The media is largely behind such an idea, and keeping the media on-side would significantly boost the Democrats’ chance of not ceding their majorities in the House and Senate, which are thin and razor-thin, respectively.

Giving people free stuff is always a vote-buyer, so the Democratic Party administration would endear itself to young voters who have student debt by transferring that debt from the few to the many.

In fact, the entire purpose of practical democracy nowadays is for vested interest groups to lobby politicians to vote for laws and regulations that would benefit them greatly, but distribute the cost widely among the population, making opposition unlikely.

In this case, a relatively small group of debtors are lobbying the government to transfer their debt to the general tax-paying population. For them, the gain would be substantial, so a major investment in lobbying would return significant profit. For individual taxpayers, the loss would be quite small, so dedicating time, money and effort into lobbying against it would probably have a negative return on investment.

This is how democracy works, and why rich elites and big business always have the government in their pocket, to deploy against the rest of us. (Note that free market capitalism rejects this role of government, and expects people to earn an income entirely on merit.)

Almost from the start, the protests were ugly, violent, disruptive and intimidatory to those not participating. The damage inflicted by violent protesters amounted to an estimated R800m (which, incidentally, could have funded a lot of scholarships).

Being allied with the #RhodesMustFall movement agitating for the ‘decolonialisation’ of education, these protests did grave harm to freedom of expression at South Africa’s leading universities, as the IRR’s Sara Gon explained at the time. Shortly before president Jacob Zuma was forced from office for being a corrupt sleazebag, he unexpectedly announced that henceforth, all tertiary education would be free for students from families who earned up to R350 000 per year.

This limit excludes only the top two or so percent of income earners in South Africa, so for all practical purposes, it applies to everyone.

The upside of government-funded tertiary education is obvious: it gives everyone, regardless of financial circumstances, an equal opportunity to try their hand at further education and ultimately, should produce larger numbers of graduates. But for every upside, there are downsides, and the downsides of free tertiary education are numerous.

With further education being free, everyone has a strong incentive to try to qualify for university, where they can spend the next few years at taxpayers’ expense, having fun and learning whatever they want to learn, if anything.

The downside is that a lot of people who shouldn’t be going to university at all do end up going. Worse, there is little incentive to choose a worthwhile study direction, since all are subsidised equally. To a free student, it makes no difference whether they study advanced engineering or medicine, or whether they swot up on art history and radical literature.

This leads to substantial problems. In the US, some students go deeply into debt studying worthless subjects and then complain that they can’t get jobs that pay enough to repay their loans.

The complainers are rarely in the STEM (science, technology, engineering, mathematics) fields. They are rarely in accounting or finance. They are rarely in medicine. The ones who complain are almost always humanities students, who are pained to discover no employer cares about expertise in Derrida, Hegel and the Language of Finitude.

Forgiving student debt reinforces the incentive to study useless subjects, instead of letting the market push people towards courses that society actually needs. The same is true for offering free education in the first place. Of course, if you really want to be an art historian, then that’s great, but you’d better be very motivated, because there are only so many art museums that will employ you. The consequences of your choices should be entirely yours, and not those of society.

The US is awash with college graduates who cannot find gainful employment. Better that a good chunk of them never went to college in the first place, and established a decent, honourable career in the trades, or some other field on which society actually places a premium.

There are loads of stories of people who quit school, learn to weld, or plumb, or build, and have earned enough to start a business, fund the purchase of a home, and start a family, by the time the graduates with a major in philosophy of race and a minor in the history of world music are fuming that their degree qualifies them only to be a supervisor at a coffee shop.

In South Africa, too, people ought to study only in fields in which they have a reasonable hope of earning a decent income upon graduation. A good way to fund further education for the poor is through bursaries and scholarships.

That there will be few scholarships in the humanities, and loads in STEM, is a feature, not a bug. Such a system gives the sponsor of student fees and expenses a reason to select the qualified and motivated students, and monitor their progress to see they don’t waste their education, as so many do.

I‘d wager far fewer students would be disrupting lectures and burning down university facilities if (a) their scholarships or bursaries covered fee increases, and (b) they would lose their free ride over misconduct. Market funding for tertiary education will also be highly responsive to market needs. Companies will sponsor fields that will ultimately be of value to them, and will select the students most likely to succeed in these fields. Foundations will offer bursaries in areas where commercial sponsors are thin on the ground, to provide for the training of future thinkers, writers and politicians.

This idea doesn’t preclude the government from funding universities directly, perhaps based on certain key performance indicators, but it would create an incentive structure that ensures school-leavers choose a study or career path that benefits both them and the economy, and are more motivated to achieve success when they do.

There’s an even more compelling argument for leaving the funding of tertiary education entirely up to the market, however.

Students who achieve university degrees do (or should, if they chose their subjects responsibly) end up in the top few percent of income earners in the country. It is, quite frankly, perverse to levy income taxes on the working class, and levy VAT, fuel taxes and excise taxes on everyone, to pay for the education of the economic elites.

Why should the welder, plumber or builder who started building a business straight out of school, and has earned some financial security now, be required to pay for entitled upper-middle-class students who enter useless fields of study and have the temerity to dictate to their professors what may be taught?

Whether this is done through a loan forgiveness programme, as is being proposed in the US, or fully state-funded education, as is the case in South Africa, this is wealth redistribution from the poor to the rich. And that should be morally repugnant to any right-thinking citizen.