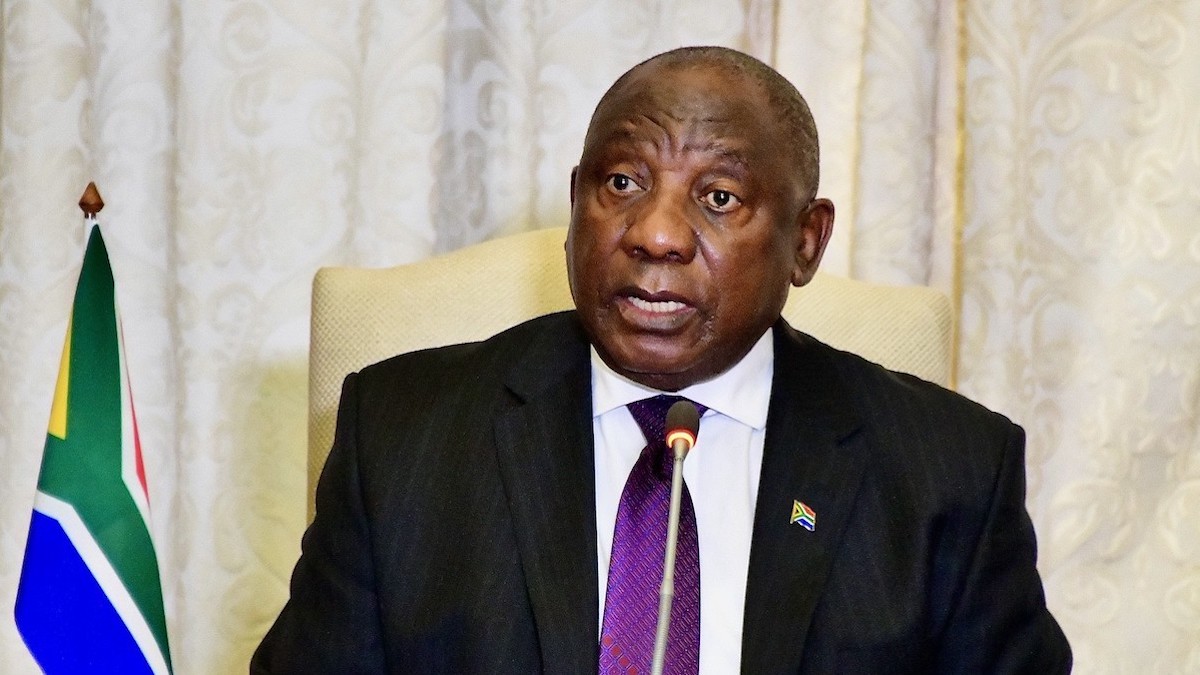 In politics it’s the law of the jungle and the leader of the currently dominant lion pride is badly injured, with too many hyenas snapping painfully at him for his fading, faction-riven pride to effectively come to his rescue. Animals and politicians have a near infallible instinct for assessing the odds and ensuring their own survival. The DA pride meanwhile is circling, ready to absorb other prides to gain dominance, however shaky and fragile such a ruling alliance might be. Its leader, John Steenhuisen, takes the storyteller’s chair, questioning in terms unpalatable to a mostly reluctant gathering, how it came to be that Lion King Cyril is being mobbed – and describing how disillusioned his subjects are. It’s a compelling narrative, stuffed with intrigue, deceit, collusion and self-sabotage, and no direct mention of the sly, scheming jackal that led King Cyril into the hyena heartland. Come Christmas, we’ll know exactly how the next chapter begins – and where the saga might end. – Chris Bateman

The purpose of this debate is to vote on the budget of the Presidency, but as we have become only too aware, this is a ministry stuffed, quite literally, with secrets and scandals.

We are asked today to say yes or no to this budget, but the reality is that none of us truly knows what happens in your office. And this makes today’s vote very difficult.

Why is it that the Presidency is the only ministry without a standing committee? We have asked this question many times before, and we are yet to receive a satisfactory explanation.

Why should every other ministry be subject to the parliamentary oversight mechanisms of a standing committee, but not the Presidency? After the shock revelations this past week, it should be clear to all that the Presidency cannot police itself.

There are many questions we would have raised in such a standing committee, but since we can’t we have no choice but to raise them here in this debate.

One of those questions is around the blurring of the line between Mr Ramaphosa, Head of State, and Mr Ramaphosa the businessman.

While police budgets for ordinary citizens are slashed and policing resources in high crime areas are stretched thinner and thinner, the VIP protection budget of the President and his cabinet is the only part of the police budget that ever goes up.

And now we are told that these precious police resources have been put to work serving the private business interests of the president – conducting secret cross-border investigations, interrogations and cover-ups.

I’m sure you’ll agree, Mr President, that South Africans have a right to know if you are using your VIP protection unit as a private debt collection agency.

Just as they have a right to know what happens behind the closed doors of your Phala Phala farm house.

I want you to imagine for a moment what all of this must look like to an ordinary South African.

What a hard-working, tax-paying citizen should make of a remote farmhouse where tens of millions of Rands in foreign currency have been stuffed into the upholstery of the sitting-room furniture.

What should such a regular citizen think when told that more than R60 million of this hidden cash was stolen, and that the president didn’t want anyone to ever know about it.

That he had the suspects tracked, rounded up, interrogated and paid off to keep their mouths shut.

Normal people – law-abiding South Africans who have to save for months to pay for things like school uniforms, school fees and children’s birthday parties – cannot begin to imagine that kind of money. But you didn’t even report it to the police.

Never mind getting it back, you didn’t want anyone to know it ever existed.

Just how much money do you have stashed away if you can afford to turn a blind eye to $4 million?

What should the average South African citizen make of this, Mr President?

You say all that money was from the sale of animals, but I don’t think there are many people who truly believe that.

You say this is all above board and that you’ve broken no laws. But stuffing millions into couches, hiding the robbery from the police and paying the robbers hundreds of thousands of Rands to not say a word – these are not the actions of someone who has broken no laws.

These are the things we see in mafia movies about cartels and syndicates and gangsters.

If this was all above board, as you claim, you could have ended it right away with a frank and full public disclosure. None of that would have jeopardised any investigations, and no one believes you when you claim that this is the reason you can’t speak.

An honest and innocent man who was the victim of a massive crime would have wasted no time setting the record straight.

Only a man with a lot to hide would choose to silence himself behind a smokescreen of a “pending investigation”. And in this silence, people will start answering the many questions themselves.

So again, I am asking you to come clean to the people of South Africa. No more subterfuge, no more secrets. Just straight answers to these questions – and I will happily send you the text of this speech so you have them all on record:

How much money was stashed away at Phala Phala at the time of the robbery, and in what currencies?

How much was actually stolen?

How did this money enter South Africa, and who brought it in?

How long was this money in your possession?

Were the exchange controls of the South African Reserve Bank observed?

How much foreign currency is stashed on your farm right now, and how much is stashed at your other properties?

Why did you not report the crime to SAPS?

Were suspects detained on your farm, and if so, on whose authority and in terms of what law?

Did you send Major-General Wally Rhoode to Namibia to conduct investigations, and if so, on what authority did he travel there?

Who paid for this cross-border investigation, and how much did it cost?

Who paid for the subsequent security upgrades to your various properties, and what did these upgrades entail?

Did you use your position as head of state to seek assistance from the Namibian government?

Was the remainder of this foreign currency banked, and if so, on what date? Was it declared to SARS?

And finally – and arguably most importantly – given your unique obligation as president to uphold the Constitution and serve the people of the Republic, how do you square this obligation with the sordid details of this case?

Every day that these questions remain unanswered causes irreparable damage to the Office of the Presidency, which has now gone from paralysed to petrified.

Even the very best-case scenario – with the most generous interpretation of how you came into possession of that money, why it was concealed in your house, and your reasons for a cover-up – is damning for you.

But we’re not talking about a best-case scenario here, are we, Mr President?

Because if we were, you would’ve surely reported this incident to the police two years ago. Or at the very least, come clean when it all came to light now.

The fact that you used your significant powers and resources – paid for by the taxpayers of this country and funded through this budget – to conceal any evidence of this money tells me that the real story is something your presidency probably cannot survive.

Even your biggest praise-singers are now realising that perhaps the emperor was naked all along.

To understand, fully, the sense of anger and disappointment South Africans are feeling right now, you have to remember that we’ve been here before.

Do you recall the shame of Nkandla and the arrogance of your predecessor?

Do you remember the embarrassment of the fire pool video, and all the shameless defending done by the members in these ANC benches?

Do you remember the scathing rebuke Parliament got for failing to hold President Zuma to account for Nkandla, and the solemn promises of “never again”?

Do you remember the words of then Chief Justice Mogoeng Mogoeng in his 2016 judgment where he spoke of the unique obligations of the President and first citizen of the Republic?

Allow me to remind you.

“He is required to promise solemnly and sincerely to always connect with the true dictates of his conscience in the execution of his duties. This he is required to do with all his strength, all his talents and to the best of his knowledge and abilities.

And, but for the Deputy President, only his affirmation or oath of office requires a gathering of people, presumably that they may hear and bear witness to his irrevocable commitment to serve them well and with integrity.

He is after all, the image of South Africa and the first to remember at its mention on any global platform.”

You see, you have to be beyond reproach. You have to be open and transparent so that the people of this country can know you are serving them well and with integrity.

But you are none of these things. There is only suspicion, secrecy and silence.

How exactly are you different from your predecessor, Mr President?

Phala Phala is your Nkandla. It will forever be a big, ugly stain on your presidency.

But here’s the thing: The Presidency is not yours or your party’s. It belongs to the Republic of South Africa. When you drag the Presidency into the gutter, you are dragging our country down there too.

South Africans don’t want this, and they don’t deserve this.

They don’t want a two-bit mob boss with houses stuffed full of dirty cash for a president. They want someone who leads by example – someone who puts his or her personal ambitions a distant second to the needs of the country.

And so maybe this whole sordid mess is doing South Africa a favour by opening its eyes to the reality of the ANC.

If you were indeed the best your party had to offer, then your party’s days in government are done come the next elections.

Our country’s number one goal must be to reduce the once dominant ANC to a minority party in 2024. That is indeed my own party’s top priority.

Once South Africa has put the ANC behind it for good, our country will finally begin to make progress.