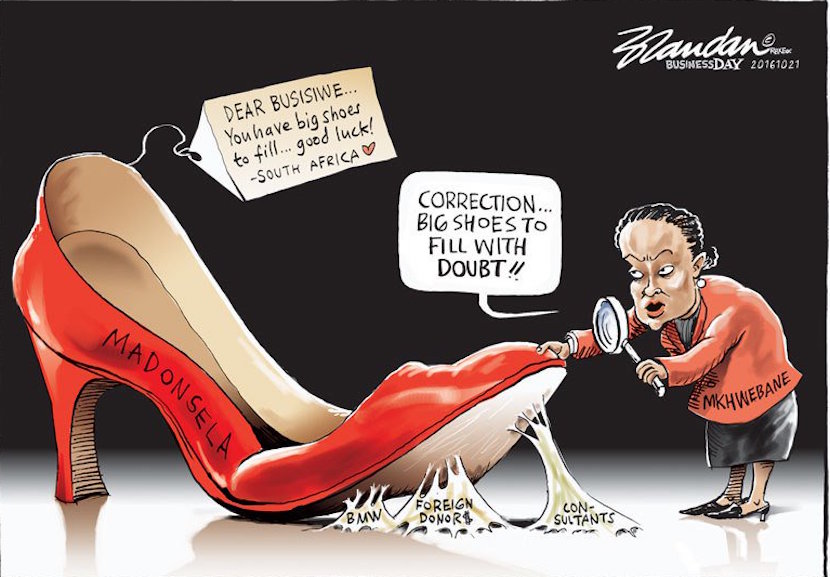 There’s no doubt in my mind that special investigation and national prosecution veteran Willie Hofmeyr is being side-lined by National Director of Public Prosecutions boss Shaun Abrahams. Call me unscientific and anecdotal, but witnessing his career and behaviour, both since 1994 and against the apartheid riot police in greater Cape Town’s townships in the turbulent, flaming 80’s, convinces me of his integrity. I watched Hofmeyr prostrate himself in front of the large wheels of a Casspir in Khayelitsha after the notorious Major Dolf Odendaal, (if memory serves), had arrested and loaded then Progressive Federal Party MP and activist, Jan van Eck, into the back of the vehicle. (Van Eck’s “crime”? Being in a township without express permission and/or within sight or sound of ‘’unrest”) Proper use of weird laws. Today we have weird use of proper laws. I have no doubt about Hofmeyr’s backbone; his career is replete with examples. His superior, well…that’s a different story. Abrahams has certainly shown very little respect for the track record and experience of his colleague, as this letter of complaint from social worker John GI Clarke to new Public Protector, Advocate Busisiwe Mkhwebane, highlights. – Chris Bateman

Complaint against the National Director of Public Prosecutions for alleged maladministration, misuse of official resources and abuse of authority.

Further to the attached letter of complaint, which was sent to the Office of the Public Protector on 15 August, I wish to bring to your attention the fact that I have had no response to my complaint from Advocate Shaun Abrahams, the National Director of Public Prosecutions. During my telephone call to the NPA complaint line, I was told that Advocate Abrahams would receive the complaint within a matter of a few days, and that I could expect a response within approximately six weeks. Eleven weeks have now elapsed. I have been further informed that the NPA Act has a statutory complaint mechanism but that internal procedures have never been developed to operationalise the complaints mechanism. That neglect is further cause for concern. The absence of an effective internal process to deal with perceived injustices arising within the workings of National Prosecuting Authority is hardly cause for society to vest its confidence in the NPA.

While Advocate Abrahams has had other very pressing priorities demanding his attention, I do not consider that an acceptable excuse. On the contrary his failure to respond to my complaint underscores my concern. if Advocate Abrahams was seriously committed to Section 195 1. (h) he would have surely used Mr Hofmeyr’s experience and expertise to manage the current crisis within the NPA and deal with the pressing priorities he is facing, especially given that one of his other Deputies Ms Nomgcobo Jiba and the Special Director of Public Prosecution, Mr Lawrence Mrwebi have now been suspended after having been struck off the role of Advocates by the General Bar Council. Mr Hofmeyr has no such marks against his professional reputation, but continues to be under-utilized.

Instead of turning to Mr Hofmeyr to help steer the NPA through the crisis of confidence it is facing, on Wednesday 12 October 2016, Advocate Abrahams reportedly said in Parliament in response to questioning from MP’s that his Deputy Director “must find another job if he is not happy”. The NPA is the only institution that is constitutionally empowered to pursue criminal prosecutions. That is what Mr Hofmeyr has been doing for the better part of his career in public service. I believe Advocate Abrahams needs to be confronted to explain his contemptuous statement. As it stands, his reply is further grounds to argue he is not a fit and proper person to occupy the office as NDPP, because his statement suggests that he does not consider the public interest as a matter of paramount concern to him.

Sudden resignation of PP office CEO says a lot about how things will move forward now in that office with new @PublicProtector. I'm worried.

As you may be aware I have been campaigning in public via social media to canvass the extent to which there was general support for my complaint from the public. On Sunday 30th October 2016 I put an invitation out to my FaceBook friends as follows.

Breaking news is that the head of the NPA Advocate Shaun Abrahams will be withdrawing the charges he laid against Pravin Gordhan et al.

The fact that he wasted NPA resources to pursue the charges in the first place is a shocking abuse of power, which has further de-legitimised the vital institution he leads.

I intend to write a fresh letter to the new Public Protector Advocate Busisiwe Mkhwebane to add that charge to my existing allegation that Advocate Abrahams has grossly abused his powers and is guilty of gross maladministration.

I do so simply because my professional code of practice obliges me to challenge social injustice in the interests of the most vulnerable and disadvantaged, not because I have anything personal against Advocate Abrahams or President Zuma etc. I have no party political interest either. But it would help if I could indicate some measure of public support for my letter so please can I ask my FB friends to 1. Share this post, and 2. Inbox me with your name if you support (and ask your friends to do the same) the complaint.

Let’s join the chorus to petition Advocate Mkhwebane to prioritise this complaint for investigation, and help us clean out the rot in the NPA, so that ordinary citizens can see the courts used for criminal prosecutions and genuine public interest litigation rather than to indulge the contagion of politically motivated interdicts, etc, and that journalists and editors can give attention to the endless scandals of injustice against poor, vulnerable and disadvantaged individuals, families and communities which go unreported because the available airspace is so overcrowded.

In the space of 24 hours the post was shared 491 times and I have been inundated with ‘likes’, messages of public support, and requests to be ‘friended’ on FaceBook. I have since been interviewed on radio (Talk Radio 702) and TV (ENCA – see below) and have concluded that my complaint certainly does have sufficient public support to warrant the time and resources of your Office to accept the complaint for investigation.

Accordingly, I am submitting this complaint to you on behalf of over 1000 ordinary members of the public who believe we need to be protected from an NPA that has been loosened from its moorings to entrenched absolutes in the Constitution, especially the values and principles governing public administration written in Chapter 10, Section 195, clause 1.

Finally, please accept this complaint as a bona fide effort by an experienced social worker who has for over three decades worked to promote restorative justice. I have nothing personal against Advocate Abrahams, and would like simply to put to him my growing concern that his evident failure to show proactive commitment to Constitutional values and principles is robbing the State of the credibility and capacity to achieve restorative justice outcomes. President JF Kennedy’s famous aphorism “those who make peaceful change impossible, make violent change inevitable”, is true. If a political battle for the soul of the NPA is allowed to continue it will only increases the risk of aggrieved victims of crime and injustice taking the law into their own hands to seek redress. The consequent erosion of the Rule of Law will shift South Africa ominously toward the dreaded Failed State scenario.

Be assured of my fullest cooperation and commitment to continue working with you and your staff to pull South Africa back from that abyss.

I look forward to hearing from you. Sincerely yours.