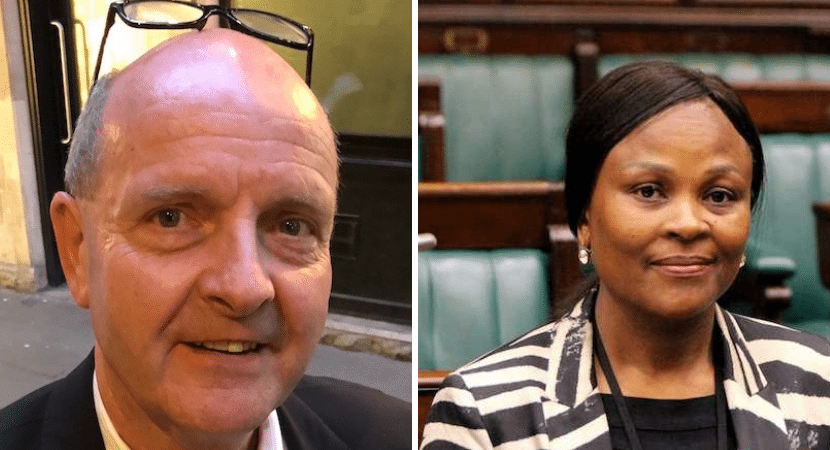 If South Africa’s Constitution can be likened to the Queensberry Rules, which revolutionised the concept of a fair boxing contest, then Paul O’Sullivan’s “put ém up” challenge to Public Protector Busisiwe Mkhwebane promises to be riveting. The Queensberry rules forbid any hugging or wrestling. No problem on the former and we’ve gone way beyond the latter. Watch Mkhwebane’s video outlining her EFF-led exhumation of actions against Public Enterprises Minister, Pravin Gordhan, (which his lawyer Tebogo Malatji says was released before they were apprised of her latest salvo). Then read her lawyer’s seven-day-retraction-notice to forensic sleuth Paul O’Sullivan on his ‘insults’ against her, thus flouting a legal provision protecting her office from same – and read O’Sullivan’s reply. She’s walked into a Freedom of Speech firestorm, with O’Sullivan astutely quoting what every high-profile, respected and credible analyst, not to mention a few judges, has said about her publicly, shredding her credibility. O’Sullivan wants to know why, in the face of all this, she’s singling him out for calling her a Zuptoid and Zupta-protector. Decide for yourself what the chances are of the Constitution’s Freedom of Speech provisions nullifying the Public Protector’s legal upper-cut. That she continues to blunder on defies logic… almost. – Chris Bateman

First, I note that you have not had the common-decency to respond to my last mail below. Is there a reason for that, or is it just because you have realised that you are out of your depth?

Next, please view this pathetic video:

Then you explain to me why so many people (quite rightly in my opinion) have formed the opinion that the current public protector is only protecting the Zuptas? The above video makes it clear that she has an agenda. I invite you to invite any expert on body language, (which I am) to view the video and make an assessment as to the honesty, or otherwise of the person being interviewed.

If you can explain that to me, I will take my hat off to you. If you cannot, then I will call for your dismissal, for your unlawful threats against me. For what it’s worth I paid more in taxes last year, than you earn as a salary. Or at least I hope so, unless you earn north of R5m. In fact, whatever you earn, it amounts to fruitless and wasteful expenditure. I do not expect ‘captured’ employees of a captured institution to use my taxes to threaten me.

I also invite your boss to take a polygraph, to see if she genuinely believes what she was saying on that social media interview set on a stage in her office. I will pay the cost of such polygraph. Her refusal will be seen as an admission by her that she is scared of such a polygraph outcome.

Furthermore, I invite you to give me legal argument as to why Section 9 (1) (a) of the Public Protector Act should NOT be declared to be ‘unconstitutional’, as it fetters the rights of any citizen to freedom of expression? Just give me the short version, not a long-winded response, as you are no doubt going to try and do. If I do not hear from you within SEVEN DAYS, which is plenty of time for someone that has nothing to do all day, then I shall launch an application in the High Court to have it, and your unlawful threats against me, declared UNCONSTITUTIONAL. If you refuse and/or fail to answer, then you will have to accept that fact when you are exposed for being ‘captured’, as you will be if you don’t start explaining yourself.

I further place the following on record:

I invite your response to the above points and can assure you that whatever you say WILL be used as evidence against you and/or your boss.

Finally, I have copied our President, who just happens to have been one of the co-authors of the Constitution, that you seem so ready to abuse at the drop of a hat. I am fairly certain that he will maintain silence and watch me wipe the floor with you and your boss, if you don’t come clean.

I have also blind copied one or two journalists, because I am not scared of you or your kind, or your threats. I therefore HOPE my ‘insults’ as you call them will be published and that the Public Protector will attack me, instead of protecting me, so that we can get this little kerfuffle under way.