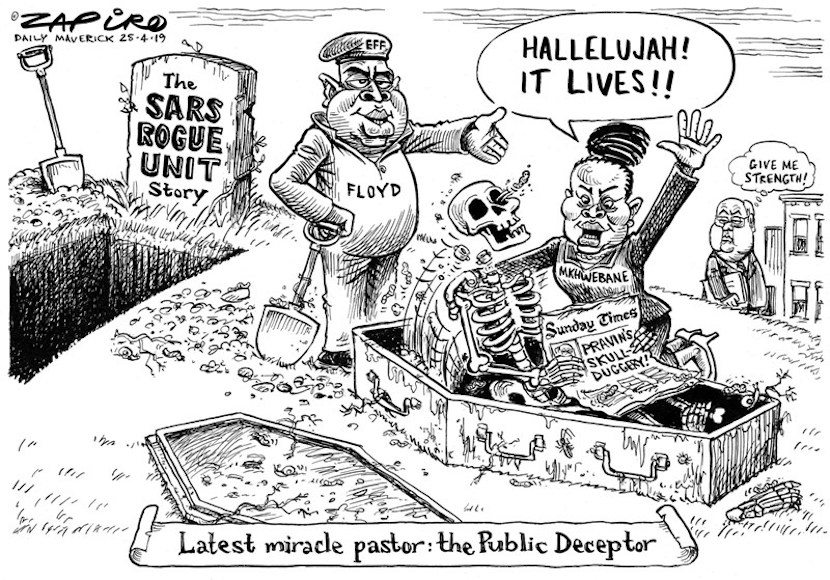 CAPE TOWN — For anybody who still believes, no matter what their ideological framework, that the State has ever done anything in the public interest when it comes to national security, this dig through the entrails of the latest manifestation of ‘our’ spy agency, might convince you otherwise. It’s courtesy of South Africa’s esteemed Public Protector who once told horrified MPs she was thinking of appointing the State Security Agency (SSA) to oversee her outfit’s information management system. Pause, adjust-mindset, engage; spooks overseeing whistle-blower data. Unsatisfied by her bid to change the mandate of the Reserve Bank, she’s now using an affidavit by none other than deputy president of the EFF, Floyd Shivambu, to try and nail Public Enterprises Minister Pravin Gordhan. It’s not just about the ‘rogue unit’ he allegedly ran (found legal thrice-over) during his tenure as SARS Commissioner. It leans heavily on a classified report (which everybody seems to illegally have), after a probe of SARS ordered by the late former Inspector General of Intelligence, Advocate Faith Radebe. The investigators didn’t quite follow their mandate; instead of probing SSA agents embedded in SARS it probed SARS officials. Now who would have benefitted from that? Story courtesy of the Daily Maverick. – Chris Bateman

The report was made public by EFF Deputy President, Floyd Shivambu, when he attached it to an affidavit in another matter in the Equality court, also involving Gordhan.

In January 2019, Shivambu attached Radebe’s 2014 report to his affidavit filed with the Equality Court in a hate speech matter brought by Gordhan. This after EFF leader, Julius Malema, had insulted Gordhan at an EFF rally calling him “a dog of white monopoly capital” who “hates Africans”.

Both Shivambu and Malema have ongoing personal tax issues with SARS and have issued vicious public attacks on the institution and individuals. Both men have also come out in support of former SARS Commissioner Tom Moyane after his suspension by President Cyril Ramaphosa in March 2018.

IMPORTANT:Axed SARS Comm Moyane has attached an Inspector General of Intelligence report on so-called SARS “Rogue Unit” to his Minister Gordhan cross exam application
This is same report PP Mkhwebane has reportedly been threatened with prosecution for having in her possession

It is no small irony that it was Shivambu who lodged the current complaint with the public protector using the ongoing “rogue unit” narrative which has been employed in numerous unsuccessful attempts to fell Gordhan and others, including former Deputy SARS commissioner, Ivan Pillay.

In the end, the DPCI and the NPA both declined to press criminal charges after the relentless hounding of Gordhan, Pillay and other senior SARS officials by the DPCI under the former disgraced head, Berning Ntlemeza.

The Nugent Commission of Inquiry in September 2018 found that in 2015 senior council had given a legal opinion to Moyane, who was commissioner at the time, that the high-risk-investigative unit at SARS had not been unlawfully established. Moyane, the Nugent Commission found, had never made this opinion public.

“I find no reason why the establishment and existence of the unit was, indeed, unlawful, and I am supported in that by an opinion given to Mr Moyane by leading senior counsel in late 2015. As far as I am aware, that opinion has never been publicly disclosed,” Nugent said in the final report.

This month, April 2019, Mkhwebane informed Gordhan that her office was revisiting the case after a complaint was lodged by Shivambu.

Mkhwebane this week subpoenaed Gordhan to respond to the over 10-year-old allegations that he had participated in the creation of a “rogue unit” during his tenure as SARS Commissioner.

State capturers know damning evidence is coming from Gordhan. Abrahams is gone, so they send out their lackey Mkhwebane to hound him, yet again, with the same thoroughly discredited trumped-up charge. This is a step too far. Beyond what honest South Africans can tolerate.

Speaking on the Eusebius McKaiser Show on 702 on 24 April, Public Protector spokesperson, Oupa Segalwe, said the office had received two complaints against Gordhan, one from Shivambu, and another from an anonymous person who he confirmed “worked in government”.

Mkhwebane has subsequently agreed to extend the deadline for Gordhan to respond by May 3.

Segalwe said despite the fact that the DPCI and the NPA had both declined to prosecute Mkhwebane’s mandate was not to look into the criminal nature of the complaint but whether there had been “maladministration” on Gordhan’s part.

He said the Nugent Commission had, in fact, found that some of the activities of some of the members of the unit could have been unlawful and it was this that Mkhwebane was also taking into account in the renewed probe.

Anyone trying to make sense of the latest chapter in the Public Protector vs Gordhan matter must, however, take into account the findings of the recent Mufumadi High-Level panel review of the SSA which found that a Special Operations Unit (SOU), headed by Thulani Dlomo, had been run as a parallel intelligence structure serving the personal interest of then sitting President Jacob Zuma.

The report also found that the SSA’s SOU had been set up irregularly by Presidential Proclamation rather than through legislation.

All of this underpins the current attempt at targeting Gordhan.

On Wednesday, Segalwe said that the two complaints to Mkhwebane related to the SARS “rogue unit” as well as another with regard to the retirement of Pillay. Segalwe said the PP’s mandate was not to investigate criminality but to probe the possible abuse of power [by Gordhan] as well as the abuse of state resources and improper enrichment.

Mkhwebane on 23 April accused Gordhan of “colluding” with “others” in responding to her new questions. Gordhan, in turn, accused the Public Protector of abusing her office and challenged her to “provide a factual basis for the statement suggesting the minister is acting in concert with others and why he is referred to as an implicated party”.

An important sub-theme to the main event is, of course, Rabebe’s 2014 report into the role of SSA agents in the SARS “rogue unit” narrative which resulted in the suspension and mass exodus of senior staff from SARS.

Testifying at the Zondo Commission of Inquiry on 17 and 18 April 2019, former KwaZulu-Natal Hawks head, Johan Booysen, implicated Radebe and the office of the IGI in the removal of incriminating evidence from dockets pertaining to high-level criminal investigations into politically connected persons.

Radebe, who died in April 2018, was a former employee of the National Intelligence and the State Security agencies and as such a deep insider in this clandestine, shady world.

Mkhwebane, coincidentally in the same month Radebe died, told MPs that one of her senior managers was receiving training at the State Security Agency.

At the same presentation to parliament Mkhwebane shocked MPs by announcing there was a possibility that the SSA “could take over the information management system” at the Public Protector’s office, thus exposing possible anti-corruption whistleblowers to the state’s notoriously unaccountable security services.

The Zondo Commission has heard evidence that it was Radebe who had ultimately backtracked on her own decision (after receiving a detailed investigation by the DPCI into abuses of the police Crime Intelligence Division) to recommend to the NPA that Mdluli be charged.

Radebe reportedly changed her mind after then-President Zuma had called her.

Radebe also investigated and provided two reports, in 2013 and 2014 on the Principal Agent Network (PAN) established in the early 2000s by SSA DG Arthur Fraser and former NIA DG Manala Manzini and which was found to have blown millions over years with no authorisation and no accountability.

Back in 2014, Mahlobo, then Minister of State Security announced that he would request Radebe to conduct an investigation into the role of State Security Agents in the SARS “rogue unit” saga as it had played out in the media.

One of those was triple agent, Pretoria Advocate Belinda Walter. The other was Mandisa Mokwena, former SARS Group Executive of Business Intelligence (later known as Risk and Segmentation) and former business partner of Thobeka Madiba-Zuma.

“In the wake of weekend newspaper reports alleging improper conduct against persons reported to be associated with the State Security Agency, the minister of state security … has requested the inspector-general of intelligence, Advocate Faith Doreen Radebe, to conduct an investigation in terms of the Intelligence Services Oversight Act, Act 40 of 1994,” Mahlobo said at the time.

The investigation, he said, would seek to establish the facts and “get to the bottom of the allegations made about members of the State Security Agency”.

However, instead of investigating SSA agents embedded in SARS, Radebe, whose office has no statutory mandate or jurisdiction over SARS, appears to have probed SARS officials instead.

It is now this classified report that was surfaced by Shivambu and that Mkhwebane is relying on, in part, to re-probe Gordhan.

Moyane, through his legal representative too sought to admit Radebe’s classified report to the Zondo Commission of Inquiry. Chair Judge Raymond Zondo reserved judgement on the matter.

Moyane too, Gordhan reminded him, was illegally in possession of the classified IGI report he sought to admit.

Oddly, Dipuo Letsatsi-Duba has not criminally charged Shivambu or Moyane for being in possession of a classified document.

On Wednesday Gordhan’s legal team said the Public Protector had to provide the Minister with what “she considered to be special circumstances as contemplated in Section 6(9) of the Public Protector Act, 1994 which provides that she shall not investigate complaints which have not been referred to her office within two years from the occurrence of the matter concerned, save if there are special circumstances to do so”.

Gordhan, through his lawyers, had also raised with the Public Protector the issue “on why such special circumstances exist in the face of a prior investigation by her predecessor, the Hawks, the NPA and the Nugent Commission, which have traversed the issues she is now investigating, and have all effectively concluded that there was no wrongdoing”. DM