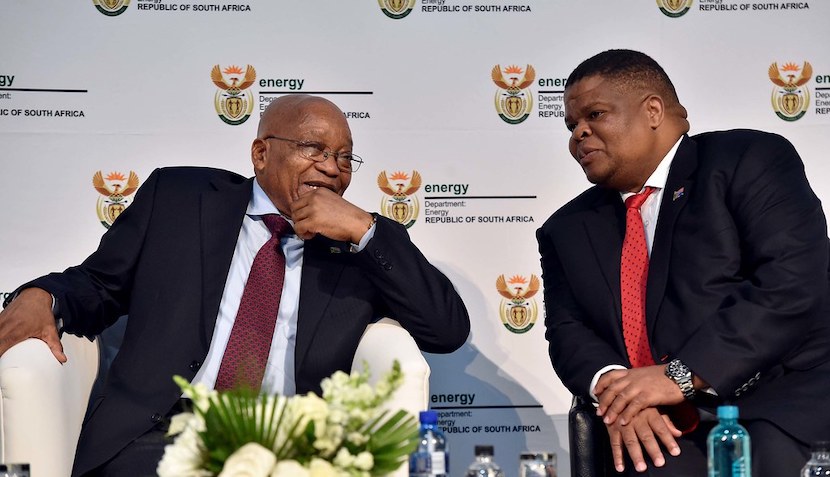 South Africa is undergoing the equivalent of lengthy chemo and radiation therapy treatment to painfully rid us of the cancer of State Capture. Full remission is a long way off as this latest scan of the State Security Agency shows. Once again, it’s shocking that key players, the evidence shows, are roaming free in society, some laying low, others still up to their dirty tricks. There’s a compelling case to be made for Jacob Zuma having used his considerable expertise as ANC intelligence-chief-in-exile, to build and bolster a highly effective spy network from when he took over the presidency. He learnt well from his apartheid enemies, setting up his own Bureau of State Security, except not in service of a discredited and hateful ideology, but something perhaps more sinister and destructive. This story graphically outlines the use of the state security network to enable State Capture, discredit, hound and prosecute enemies and create a false narrative. If some of today’s false news peddling and smear campaigns are any indication, rogue elements are still at work. This cancer has metastasized to every corner of the body politic. Let’s hope democracy survives the treatment. Story courtesy of the Daily Maverick. – Chris Bateman

The man at the centre of Jacob Zuma’s web is one of his most trusted spies, Thulani “Silence” Dlomo, former head of the State Security Agency’s (SSA) Special Operations Unit, an outfit not only implicated in the attack on SARS and other institutions, but also in an elaborate attempt to clean up a trail of evidence implicating Zuma in the arms deal scandal.

In fact, the Office of the Inspector-General of Intelligence is presently investigating one such SSA agent placed at SARS, handled by Dlomo and who was found to have run a network of 21 agents in the tax agency. Her deep undercover work at SARS coincided with the attack on the institution, the construction of the “rogue unit” narrative and the ultimate purging and hounding by the Directorate for Priority Crime Investigation (DPCI) of experienced staff after the appointment of former commissioner Tom Moyane.

In the world of secret services, it is said that the intelligence structures of a country mirror its government. Using this prism, South Africa’s intelligence services mirror the Zuma presidency: a mafia, accountable to no one but the Don himself. The Constitution of the Republic of South Africa, the sacrifices, the needs, the hopes and the dreams of “the people” were contemptuously and cynically ignored.

In the process, billions in public funds were siphoned off to prop up a president and a network of corrupt cronies, praise-singers, elected officials and bottom feeders who relied on his (paid by us) largesse to stay in power and keep up their lavish lifestyles.

Shortly after the damning findings of the High-Level Panel were released in December 2018, President Cyril Ramaphosa recalled Dlomo from his ambassadorship in Japan. Dlomo was meant to account for the bulk of evidence presented to the panel and which pointed to widespread criminality, subversion and possibly treason. Four other SSA agents who had been posted to diplomatic structures were also “recalled.”

Of course, in a functioning democracy, Zuma’s spy would have been greeted at the airport by a delegation from the Hawks’ Crimes Against the State Unit. Someone must have booked his one-way ticket home. Instead, Dlomo disappeared into thin air and has been AWOL since.

In the meantime, about 186 of his agents are still lurking, some waiting for their money, others happy to do the dirty work for whoever is willing to pay for the pushback against corruption-busters.

Dlomo was offered the highly sought-after ambassadorship to Japan in August 2017 after his hush-hush suspension from the State Security Agency in 2016. Apart from heading the Special Operations Unit, Dlomo was also deputy director of counter-intelligence in the internal wing of the SSA.

Besides Dlomo’s disappearing act, it appears evidence also exists that former SSA Director-General Arthur Fraser, along with Dlomo, allegedly removed evidence from the SSA headquarters outside Pretoria. The Inspector-General of Intelligence, Setlhomamaru Dintwe, admitted as much in a leaked conversation with the Public Protector Busisiwe Mkhwebane in January 2019.

The public protector had popped in on the Inspector-General in search of former Inspector-General, the late Faith Radebe’s, supposed investigation into the SSA and its activities at SARS. Instead of exposing the SSA network, Radebe chose to focus on SARS, over which she had no mandate and relied on Dlomo as a key witness. Mkhwebane was very keen to declassify Radebe’s report, which the EFF made public in court documents, to include in her investigation into Pravin Gordhan.

Dlomo and Fraser enjoy such high-level protection still that the Inspector-General explained to the public protector that during a raid on the SSA after an anonymous tip-off from “the farm” that the gates were open and that evidence was being destroyed, “shredded” in fact, he [the Inspector-General] had received “a call from Parliament” to admonish him for wanting to conduct a raid.

“We complied with the law, we gave them 24 hours. You must see the barriers. We had to go two days afterwards and then I was attacked,” Dintwe told Mkhwebane.

Millions – in dollars and pounds – had also been spirited out of South Africa in unchecked diplomatic bags and taken to “compounds” overseas where “agents” would access it, said Dintwe.

“There are buildings stashed with cash. It still exists,” an exasperated Dintwe can be heard telling the public protector.

That Dlomo has been allowed to “disappear” and that Fraser has not been brought in for questioning, points to the continuing deep and worrying dysfunction of South Africa’s security agency in the aftermath of the release of the findings of the High-Level Panel review and other shocking evidence offered at the Zondo commission of inquiry into State Capture.

The damage, corruption and misappropriation of state funds are so deep and so wide, investigators are having trouble containing it or bringing perpetrators to book. Dlomo’s spies continue to operate “across multi-agencies” Dintwe told the public protector.

It doesn’t help either that there are tensions between Minister of State Security, Ayanda Dlodlo, the acting Director-General of the SSA, Loyiso Jafta, as well as Mahlodi Muofhe, head of the SSA’s domestic branch. Both men were appointed by Ramaphosa and are believed to be close to the president.

Writing in City Press at the weekend, Rapule Tabane detailed the “war” between Dlodlo, Jaftha and Muofhe in which the minister has been accused of micro-managing the SSA as well as ordering the interception of the communications of a “target” without the approval of a judge. Dlodlo has also been accused of interfering in the restructuring of the agency in the wake of the mess Zuma left.

The alleged instruction by the minister to intercept the communications was in response to the wave of xenophobic attacks in Gauteng in September resulting in 12 deaths and more than 600 arrests. Dlodlo’s defenders have argued that the urgency of the situation warranted interceptions under section 7 of the Rica Act.

Dlodlo, who penned a glowing tribute to ANC Secretary-General Ace Magashule in April 2018 after the publication of Pieter-Louis Myburgh’s book Gangster State, has a considerable constituency in the ANC and among its military veterans.

The Inspector-General told the public protector that Dlomo had promised the more than 180 spooks permanent positions and some had now threatened “to go to the media” if these promises were not realised.

“They were just picked up from all over the place. They were not even on a source register. The agency had a duplicate internal source register,” the Inspector-General told the public protector.

During the July 2019 State Security Budget vote it was revealed that estimates of national expenditure for “secret services” amounted to a whopping R4.656bn. Even with this amount, Dlodlo told a media briefing at the time that the SSA was under financial pressure.

South Africans, too, are under severe financial pressure and we are not sure we have got any bang for so much buck that has disappeared into the State Security Agency’s black hole of corruption.

In June 2019, the Right2Know Campaign (R2K) called for criminal charges, including defeating the ends of justice, to be brought against Zuma, Fraser and former state security ministers Siyabonga Cwele and David Mahlobo.

“The evidence provided in the Panel Report proved that these individuals were central to the illegal spying on civil society organisations as well as the corruption and mismanagement within the State Security Agency,” it said in a statement.

In the entire sorry mess, the Joint Standing Committee on Intelligence has not sat since June and so has performed no oversight, while it is unclear what role it performed at all during the peak State Capture years where the agency was turned into a political free-for-all for Zuma.

The evidence exists, mounds of it.

What is required now is the political will and the backbone to round up all those implicated so that the process of reconstructing an intelligence service that serves the needs of the citizens of a constitutional democracy can begin.

Heads must roll. The cost of not acting is our democracy itself. DM