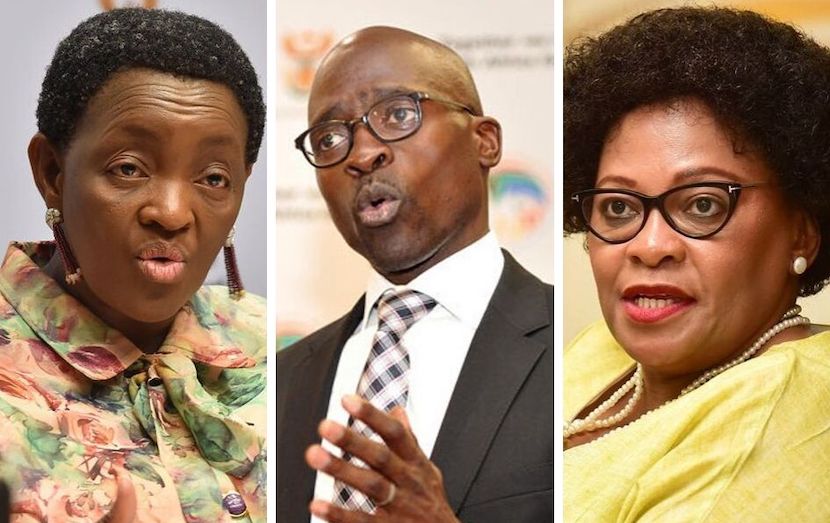 On these Biznews pages in recent weeks we’ve shared the pragmatic views of Constitutional lawyer Pierre de Vos and economics academic Pierre Faure, both tempering popular anger at the slow prosecution of State Capture miscreants. The former outlined why the NPA has such a mountain to climb and why quick fixes would be hugely counter-productive. The latter urged highly conditional amnesty for political and corporate conspirators. This to speed up an urgent focus on economic recovery. Here we have a complementary perspective, providing an easily-forgotten and much-needed factual account of just how many State capture ‘linchpins and enablers” have been weeded out – and from which key institutions. It’s in direct contradiction to those who say nothing’s being done. For me however, besides the timely, refreshing reminder and injection of hope, it’s the snapshot graphic of all those who furthered and enabled State Capture that does the trick. At a single glance (and a leisurely tour is recommended), it provides a view of who sold out our hard-won Constitutional democracy in the name of greed and personal gain/advancement. They’re no longer welcome – anywhere near government. Published with permission from the Daily Maverick. – Chris Bateman 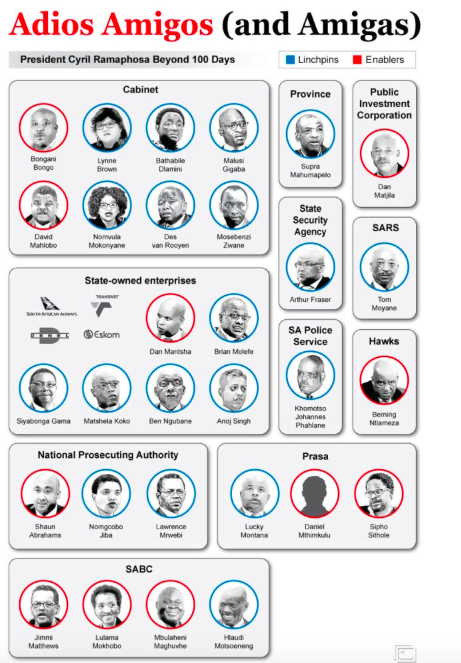 The great exit of the State Capture linchpins

Most South Africans criticise the absence of a single criminal prosecution arising out of the many revelations of State Capture, but the exit of linchpins and enablers has allowed at least the start of state retrieval.

The impacts of exit are not yet effective enough to make a substantial difference to either the fiscus or governance, but viewed together the institutional clearing this reform has allowed is a start. Take the Cabinet: eight ministers associated with the high era of State Capture and who were either linchpins (the key to the project) or enablers (those whose silence or acquiescence played a role) are gone. They include former home affairs minister Malusi Gigaba whose stint as head of public enterprises coincided with the high-water point of State Capture. So did Lynne Brown’s tenure when she was minister of public enterprises.

At water affairs and sanitation, Nomvula Mokonyane presided over an administration that bankrupted the department and saw multiple instances of infrastructure capture under her watch. In addition, at the Zondo Commission of Inquiry into State Capture this former minister was also named as key to the Bosasa patronage network. Under her watch, former minister of social development Bathabile Dlamini underwrote a sweetheart deal for Cash Paymaster Services who for years ran the payments of social grants for sky-high profits.

In the final years of former president Jacob Zuma’s administration, as the effort to extract rents became more and more desperate, his personal allies such as former intelligence minister David Mahlobo, three-day former finance minister Des van Rooyen, former mineral resources minister Mosebenzi Zwane and former intelligence minister Bongani Bongo were elevated to the Cabinet. They are long gone from the Cabinet, although Mahlobo retains a role as a deputy minister.

At Transnet, Eskom, SAA and Denel, there are new boards and the key characters associated with the corruption of procurement systems are gone – they include Brian Molefe, Anoj Singh and Matshela Koko at Eskom; Siyabonga Gama from Transnet; and Dan Matjila from the Public Investment Corporation.

At the vital public broadcaster, the buffoon-like character and former COO Hlaudi Motsoeneng is gone and so are the enablers, the former SABC CEO Lulama Mokhobo, chairperson Mbulaheni Maguvhe as well as the former head of news, Jimi Matthews.

And at Prasa, board chairperson Khanyisile Kweyama is undertaking a thorough clean-out. Former CEO Lucky Montana is gone and so is the chief engineer who had no engineering qualification, Daniel Mthimkhulu, and former head of strategy Sipho Sithole.

None of the state-owned enterprises is anywhere near a fix and almost all require national support for their balance sheets, but their distortion and dislocation has ended.

The most important clean-out has been at SARS, the revenue agency where the era of Tom Moyane is over. Last week, his lieutenant and henchman reached a settlement and quit, leaving the canvas clean for SARS commissioner Edward Kieswetter to rebuild the service.

At the institutions of criminal justice – the National Prosecuting Authority (NPA), the SA Police Service (SAPS) and the Hawks – there are new leaders in place with Shaun Abrahams, Khomotso Phahlane and Berning Ntlemeza all put out to pasture.

State Capture is defined as the repurposing of institutions to allow a takeover by patronage networks who can engineer revenue flows to their private interests. This required the criminal justice institutions to be weakened so that the system of patronage could be entrenched without investigation.

This systemic distortion or corruption is, of course, not going to be fixed by removing only the figureheads, but it does start with new leadership.

The new boards and managements at Transnet, Eskom and Prasa have been particularly good at bringing civil actions against individuals for the return of money or in beginning to get rid of executives who enabled corruption to take place. DM