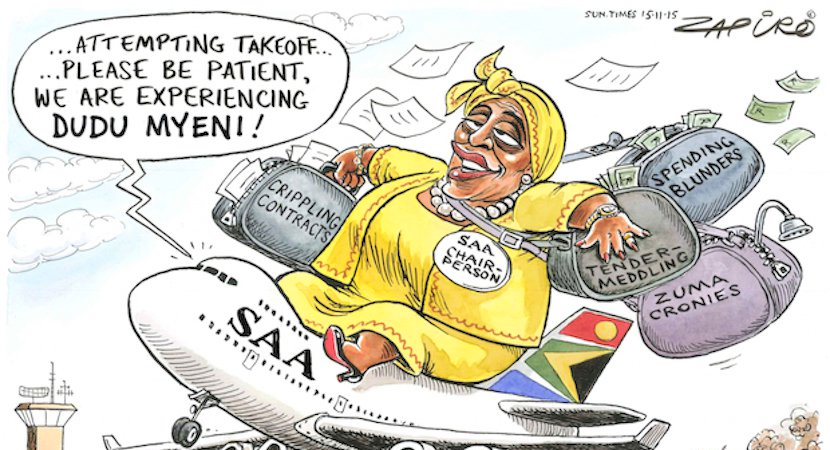 In a world where truth is often hidden by perception-forming narrative, court judgments are a welcome respite. Especially ones like Ms Justice Ronel Tolmay’s 114 page judgment delivered last week, that ensures former SAA chair Dudu Myeni will never again participate as a director in a boardroom, either in the private or public sector.

Myeni and her close friend Jacob Zuma should be grateful that few of their countrymen read such judgments. Because it unpacks with great clarity how the duo’s corruption at SAA was so obvious, their actions so callous, and damage caused to SAA (and the nation) so massive, these wrecking balls literally cost taxpayers billions.

In short, Myeni’s unrequited attempt to elicit a R10m bribe from Emirates kaibosched a code-sharing deal between SAA and the world’s biggest airline that lost SAA hundreds of millions a year in profit and has pushed it to the brink of collapse. Had the deal gone through, Judge Tolmay concluded, SAA may well have been strong enough to have weathered the current Covid-19 crisis.

Myeni also illegally attempted to extract billions via a front company (fraudulently using Nedbank letterheads) which SA Treasury’s Avril Halstead testified “would have had a catastrophic domino effect on other SOEs and the economy.” When Myeni couldn’t persuade Finance Minister Nhalnhla Nene to support her scam, pal Zuma replaced him with “weekend special” Des van Rooyen, sparking the Nenegate crisis.

So almost five years after the case began, we now know the depth of the Myeni/Zuma greed and their ignorant arrogance. The question now is why are they still walking free?

* We’ll be unpacking the Myeni court case and judgment during Rational Radio at noon today with Capt Jimmy Conroy ex-SAA Pilot’s Association chairman who was at the trial every day (Premium subscribers can participate, register here: https://attendee.gotowebinar.com/rt/6500653998832447503) and again on the Thursday Noontime webinar with the other plaintiff, OUTA’s Wayne Duvenage (open to all, register here: https://attendee.gotowebinar.com/register/8398038334086112016).

Alec: lodged inextricably and deep in the ANC heart is the pure, evil and destructive spirit of communism which commands that each shall give according to his or her ability while each shall receive according to his or her needs…thus, to take it to it extremes, the finalists in the Olympic Games in the 100m sprint, in whatever discipline, will reflect not ability, but rather the outcome that serves equality, not merit…in their words you wish for a system in which there are no losers….everyone wins. Give me a break….