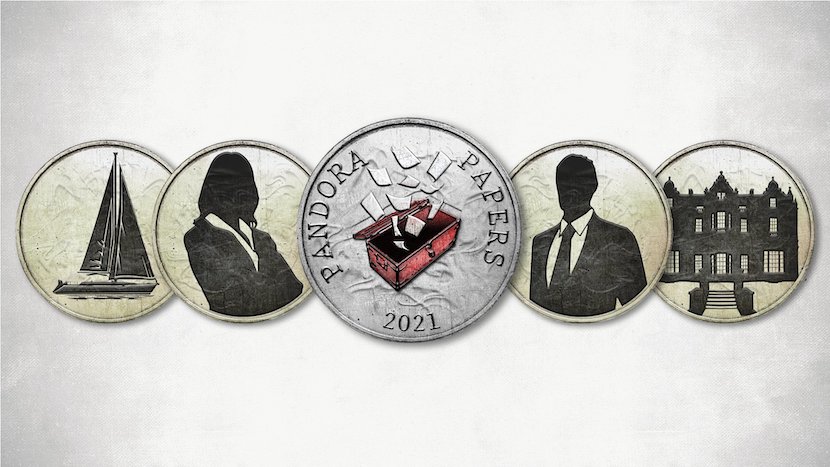 An extraordinary leak of financial records – bigger than the 2016 Panama Papers – has revealed the offshore financial assets of myriad world leaders (both former and current) as well as hundreds of politicians, businesspeople and celebrities. Known as the Pandora Papers, it consists of a substantial 11.9 million confidential documents. These were obtained by the International Consortium of Investigative Journalists (ICIJ), who said the information shows how the offshore money machine operates in every corner of the planet, including the world’s largest democracies.” Numerous celebrities, including Elton John, have been named – but prominent politicians such as Tony Blair are there, too. As Bloomberg reports, “moving money through offshore accounts, in mostly low-tax jurisdictions, is legal in most countries, and many of the people named in the data release aren’t accused of criminal wrongdoing.” Former Prime Minister Blair and his wife, Cherie, allegedly saved around U$422,000 (+/- R6.3 million) when purchasing a U$9 million (+/- R135 000 000) office in the affluent London suburb of Marylebone. UK newspaper The Guardian reported that while there was nothing illegal about the property purchase, it “highlights a loophole that has enabled wealthy property owners not to pay a tax that is commonplace for ordinary Britons.” MyBroadband has also reported that two unnamed South African politicians – and over 400 business owners – have been linked to the Pandora Papers. As ICIJ notes, the documents offer “a sweeping look at an industry that helps the world’s ultra-wealthy, powerful government officials and other elites conceal trillions of dollars from tax authorities, prosecutors and others.” – Jarryd Neves

The #PandoraPapers offer insights into why governments and global organizations have made little headway in ending offshore financial abuses. https://t.co/5JF4u2V4eN pic.twitter.com/IF7VEiBhFz

Here are the biggest revelations from the Pandora Papers leak

(Bloomberg) – An unprecedented leak of financial records known as the Pandora Papers has revealed the offshore financial assets of dozens of current and former world leaders and hundreds of politicians from Asia and the Middle East to Latin America.

The International Consortium of Investigative Journalists obtained 11.9 million confidential documents from 14 separate legal and financial services firms, which the group said offered “a sweeping look at an industry that helps the world’s ultrawealthy, powerful government officials and other elites conceal trillions of dollars from tax authorities, prosecutors and others.”

Moving money through offshore accounts, in mostly low-tax jurisdictions, is legal in most countries, and many of the people named in the data release aren’t accused of criminal wrongdoing. But the journalist group said the 2.94 terabytes of financial and legal data – which makes this leak larger than the 2016 Panama papers release – shows the “offshore money machine operates in every corner of the planet, including the world’s largest democracies,” and involves some of the world’s most well-known banks and legal firms.

Here are some of the biggest revelations in the release:

Jordan’s monarch, King Abdullah II, used an English accountant in Switzerland and lawyers in the British Virgin Islands to secretly purchase 14 luxury homes worth $106 million, including a $23 million property in California overlooking a beach, the ICIJ reported, noting the country relies on foreign aid to support its people and house millions of refugees. U.K. attorneys for the king told the ICIJ that he was not required to pay taxes under Jordanian law, has never misused public funds and has “security and privacy reasons to hold property through offshore companies.”

Czech Prime Minister Andrej Babis, who is currently running for re-election, “moved $22 million through offshore companies to buy a lavish estate on the French Riviera in 2009 while keeping his ownership secret,” ICIJ said. The five-bedroom Chateau Bigaud, which is owned by a subsidiary of one of Babis’s Czech companies, sits on 9.4 acres (3.8 hectares) in a hilltop village where Pablo Picasso spent the last years of his life, the group said.

The Queen and Azerbaijan

The data release revealed that Azerbaijan’s ruling Aliyev family traded around $540 million worth of U.K. property in recent years, reported the Guardian, one of the ICIJ’s media partners. Queen Elizabeth II’s Crown Estate bought one property worth almost $91 million from the family, and is currently in the middle of an internal review into the purchase, the Guardian said. “Given the potential concerns raised, we are looking into the matter,” a spokesperson for the Crown Estate told the paper, which added the Aliyevs declined to comment.

One of the most “troubling revelations” for the U.S. was the role of South Dakota, Nevada and other states that have adopted financial secrecy laws that “rival those of offshore jurisdictions” and demonstrate America’s “expanding complicity in the offshore economy,” said the Washington Post, one of the ICIJ’s media partners. A former vice president of the Dominican Republic finalised several trusts in South Dakota to store his personal wealth and shares of one of the country’s largest sugar producers, the paper said.

Several members of Pakistani Prime Minister Imran Khan’s inner circle, including current and former cabinet ministers, “secretly owned an array of companies and trusts holding millions of dollars of hidden wealth,” the group reported. That could create a political headache for the former cricket star, who campaigned for the South Asian country’s highest office as the head of a reformist party that promised a strong anti-corruption agenda. Before the release of the Pandora papers, a Khan spokesperson told a news conference Khan had no offshore company, but ministers and advisers “will have to be held accountable” for their individual acts.

The documents show former U.K. Prime Minister Tony Blair and his wife saved around $422,000 by using an offshore company to purchase an almost $9 million office in London’s Marylebone area that was partially owned by the family of a Bahraini minister, the Guardian reported. The paper said there was nothing illegal about the deal, but it “highlights a loophole that has enabled wealthy property owners not to pay a tax that is commonplace for ordinary Britons.”