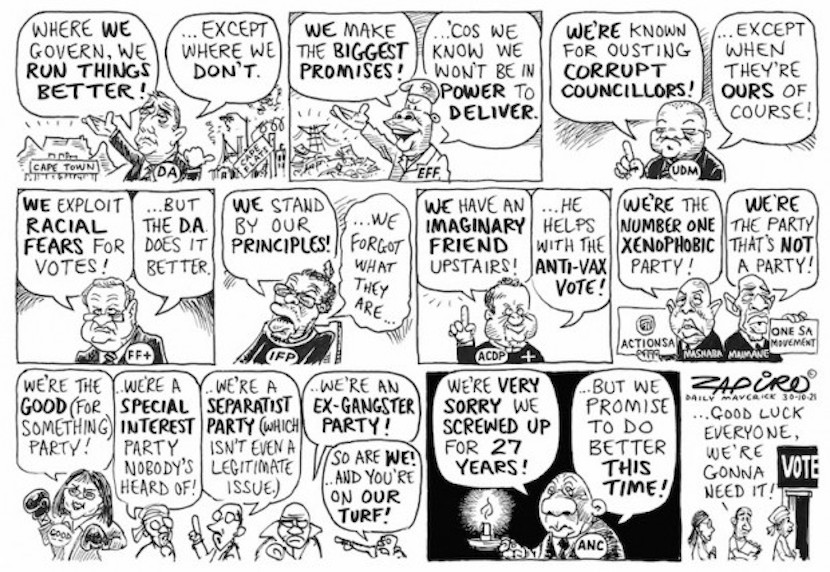 It’s a bit depressing to think that no single opposition party in South Africa is capable of doing things better than the ruling party, yet, as Simon Lincoln Reader infers. Not one party has significantly threatened the ANC in recent polls by using nuanced, cleverly directed campaigns. The election outcome has seen some blank warning shots fired across the ANC’s bow from mostly white-inhabited enclaves with a few extra disenchanted members of the wider black majority thrown in, but nothing to change the direction of a ship heading slowly but directly towards a bunch of very large icebergs. In this article, Reader uses nuanced, cleverly directed satire to compare global politics, complete with paradox, irony and exposure of some outright myopia. Schadenfreude is hardly a constructive pastime, yet in this reading of matters politic in SA and elsewhere, our author suggests it’s perhaps what too many liberals do best. – Chris Bateman

The UK Labour politician Zarah Sultana probably isn’t the stupidest person you’ve ever encountered, but she’ll give you a decent run on the year to date. Yesterday Zarah suggested that the Democrats battering in Tuesday’s elections across America was because the party isn’t left enough. Former Obama bagman Van Jones, not ordinarily a candidate here, decided to flirt with stupidity himself, remarking that the Republican’s remarkable victory in Virginia was “the delta variant of Trumpism”. MSNBC’s Joy Reid and Nicolle Wallace are plenty stupid, and predictably accused the Republicans of racism – that would be the kind of racism that elects the first black woman (an immigrant from Jamaica) as Virginia’s Lt. Governor.

This week has exposed the similarities between the ANC’s terminal decline and the Democrats. Standard in both parties’ style is devotion to benevolent despotism and sneering condescendence, suppression, irrationality and the kind of self-righteousness that forbids compromise. Quick to blame and even quicker to double-down, both are oblivious to exhaustion.

This week also exposed one notable conundrum in South African opposition politics. Brett Herron, the leader of GOOD, is a shameless admirer of the Democrats – as his social media echo chamber reveals. He follows all the profiles directly responsible for Tuesday’s disaster – even the deranged Lincoln Project (everything this scam touches dies – or is under the age of 14) – and clearly listens to nobody else. Yet despite the features that – clearly – link the ANC and the Democrats, he supports one, and positions himself as opposition to the other?

The unimaginative Republicans hardly needed to lift a finger. Virginia’s Governor-elect, Glenn Youngkin, is a former co-CEO of The Carlyle Group: as recently as five months before Tuesday’s gubernatorial, Youngkin was treading 5% name recognition in the state. So how did he succeed? The answer is alarmingly simple – and there’s something to learn in here for the ever-expanding roll of South African opposition, if they can be bothered.

The biggest winner in America on Tuesday wasn’t a politician or even a political party. He’s a man you might not have even heard of. Until July 2020 Christopher Rufo was a writer documenting the unusual travel and culture beat when someone leaked him an anti-bias training seminar that the city of Seattle were subjecting their employees to.

Rufo pursued, and found evidence that both corporates and state extensions were actively propagating wild theories that white supremacy endured in law, policy, corporate routine – and education. What he discovered was already documented as “critical race theory”, in a book by the same name published in 1995.

At around the same time, parents in America’s richest enclave were being exposed to the content being fed into the heads of their children – an unintended consequence of lockdowns. In Loudon County, Virginia, sparks began to fly at parent – school board summits. Rufo’s activism against CRT and its practitioners helped turn those sparks into a lightning rod: parents across the state who despised Trump one year ago returned in droves to support Republicans as they effortlessly exploited what Rufo had gifted them. In the words of one commentator: “what wine moms giveth, wine moms also taketh away.”

Initially Democrats and their ideological journeymen (and I would include political fixtures such as GOOD here) denied CRT’s existence. When they couldn’t deny anymore, they started endorsing it. “Its just history,” they argued. History it certainly is not: I’ve read the book, and its like a cross between an exaggerated Mussolini war diary and 50 Shades of Crapola (“wealthy man attempt to have interrelation with house help, house help icily request, as is human right, that area upon which interrelation take place be cleaned of Klebsiella pneumoniae”).

Single-issue politics. South African opposition parties do not have the luxury of “we can do these things better”. The idea that there’s enough patience to entertain progressive ideas and policies that are blunt, difficult to aim and mostly weird is hyper-elitist, cock-eyed wrong, ass-covers-face mad – if indeed winning is the thing you want. The single issue in South African politics has always been the ANC; watching it self-destruct might appeal to liberal sensibilities, but its nothing less than sadistic when the country is a guaranteed casualty. They have it all wrong, and still show no promise of learning.