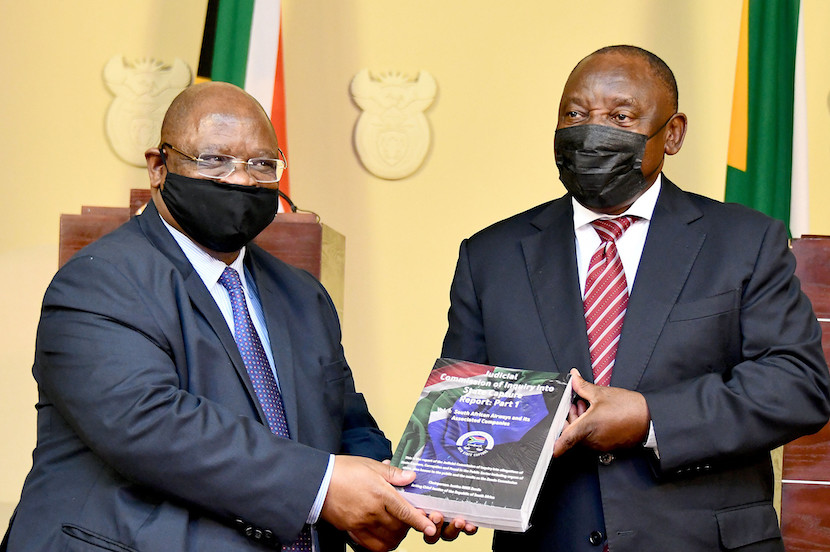 Ace forensic investigator Paul O’Sullivan takes a hard look at the first volume of the report by the Zondo Commission, offering a “so far, so good” verdict. But he draws on personal experience to share how the National Prosecuting Authority should approach miscreants like Dudu Myeni and put them behind bars without stumbling through years of courtroom treacle. Classic O’Sullivan: courageous, forthright and opening eyes to the murky underworld. – Alec Hogg

We made a very detailed submission. Then we applied to cross-examine some of the witnesses. At one stage, they were saying I would go and give evidence and then all of a sudden, out of the blue, they announced the criminal justice system is no longer part of their mandate, so they won’t be reporting on the criminal justice system. That, for me, was a problem because had they recognised the fact that state capture was only possible after the capture of the criminal justice system, they would have realised the capture of the criminal justice system was one of the enabling factors. If you had good cops and good prosecutors in situ, state capture couldn’t have happened, the people would have been arrested and charged. That’s a really big problem for me. We have got letters on file from the Zondo Commission denying my application to cross-examine certain witnesses. I wanted to cross-examine Dudu Myeni. I would have made allegations to her and she would have had to use her expression, “the Fifth Amendment”, the right to remain silent. There were a number of people within the NPA and the police who got up there and lied through their teeth or produced affidavits by which they lied through their teeth. Those people belong in prison. Some of them are still in their jobs within the NPA and the police.

On the criminal justice system to be reorganised in South Africa

I was working for the Ministry of Justice in the UK, and we were looking at reorganising the criminal legal aid system in the UK. They have what they call sentencing rules in the UK, so if you are convicted of this type of category of an offense, there’s a standard sentence you should get. They should apply that here in South Africa because the way it works in the UK is, if you plead guilty before the trial commences, you automatically get one-third of the sentence you would get if you pleaded not guilty and were convicted. Of course, you have the right to plead not guilty, but if you plead not guilty and the evidence is against you, you are convicted. If you are convicted, the decision on sentencing has got nothing to do with the jury and, for most part, it’s got nothing to do with the judge. He has a guideline he has to follow. If we have that sort of thing going on here, instead of getting 15 years, some of these people could cop a plea and go for 10 years or even five years. I look at Dudu Myeni; apart from being a despicable woman without a shred of honesty in her body, if she was to plead guilty to, for example, contempt of court – which is the offence she committed at the Zondo Commission – she named Witness X and she did that on purpose to intimidate the person. So, she could also be charged with intimidating that person or defeating the ends of justice. But if she were to cop a plea and go to jail for five years, I’m pretty sure the country would be happy whether she got five years, 10 years or 15 years. The important thing is, they have to go to prison, and if they think they can escape jail, then that’s another problem. Then there needs to be reparation. Zondo talks about reparation in the report but the problem is the legislation for reparations in South Africa also needs to be overhauled.

Ultimately, it has to have. But I’m of the firm opinion that every person, especially a person who was in a position of authority whether it was a minister, he or she, whether they were minister, whether they were CEO or CFO or chief operating officer of a state-owned entity. A lot of these people, in order to pull off the stunts they did, had to eviscerate their organisations, clear out the management that was good and ethical otherwise they wouldn’t get away with what they were doing. So you end up with all these hollowed-out state-owned entities and the people have left the vacuum and now these entities are supposed to be running on normal business lines. Meanwhile, all their expertise is gone. SAA was a prime example, Transnet, Prasa and SARS. A lot of these organisations were hollowed out for purposes of corruption, but the most important one was the criminal justice system because in hollowing out the criminal justice system, they did two things. First of all, they ensured the cops wouldn’t catch the robbers because the cops were friends of the robbers. And secondly, anybody who stood on the hill and pointed at the robbers became targets.

I opened my first criminal docket against Myeni in March 2015. It is almost seven years ago. In January 2016, I opened a docket against her with prima facie evidence in it. In March 2016, I made a supplementary statement and added more prima facie evidence. In July 2016, I made another one, and then in 2017, we opened the docket against Myeni and Zuma for corruption. So all those dockets have been sitting there all those years containing prima facie evidence. It took four and a half years to build a courtroom. Some of those dockets have been sitting there for six and a half years. I wrote a letter a couple of weeks ago to Shamila Batohi and she responded saying, “Don’t worry, we’re dealing with it.” What I’ve asked for is an assurance that they will go for the low hanging fruit. And it seems to me there’s an attitude or a policy in the NPA that everybody must be charged with everything they did. I am saying that’s wrong because, if you’re going to do that, the interests of justice will not be served. You’re going to end up with half a dozen people with long, drawn-out trials tying up the criminal justice system for the next 20 years. And that’s not in the interest of justice. I would be more than happy to see Dudu Myeni get slapped in jail for five years for defeating the ends of justice. Forget the corruption charges, that is going to be a long trial to produce. We’ve got a videotape of that woman sitting there naming Mr X; that is a criminal offense. Lock her up, short and sweet. The sad thing is, when she did that, there were policemen sitting in the room who should have arrested her immediately.

On ‘quick justice’ to be implemented in South Africa

The good news is that we are winning slowly but surely. What needs to happen is (I use the expression) quick justice. What is missing in South Africa is quick justice. The only people who get quick justice are people like myself who open criminal dockets against Dudu Myeni and three weeks later, I’m in a jail cell with handcuffs behind my back, having a corrupt general and the police poking me in the chest telling me, “You don’t know how you’ve upset Dudu Myeni.” That’s quick justice of the wrong kind. We now need quick justice of the right kind. I am hoping in the next report that Zondo doesn’t just refer to the ex-CFO of South African Airways not having complied with section 341 of the Prevention and Combating of Corrupt Activities Act. But I am hoping he will name and shame every minister and every government senior employee who knew corruption was going on and didn’t do anything about it.