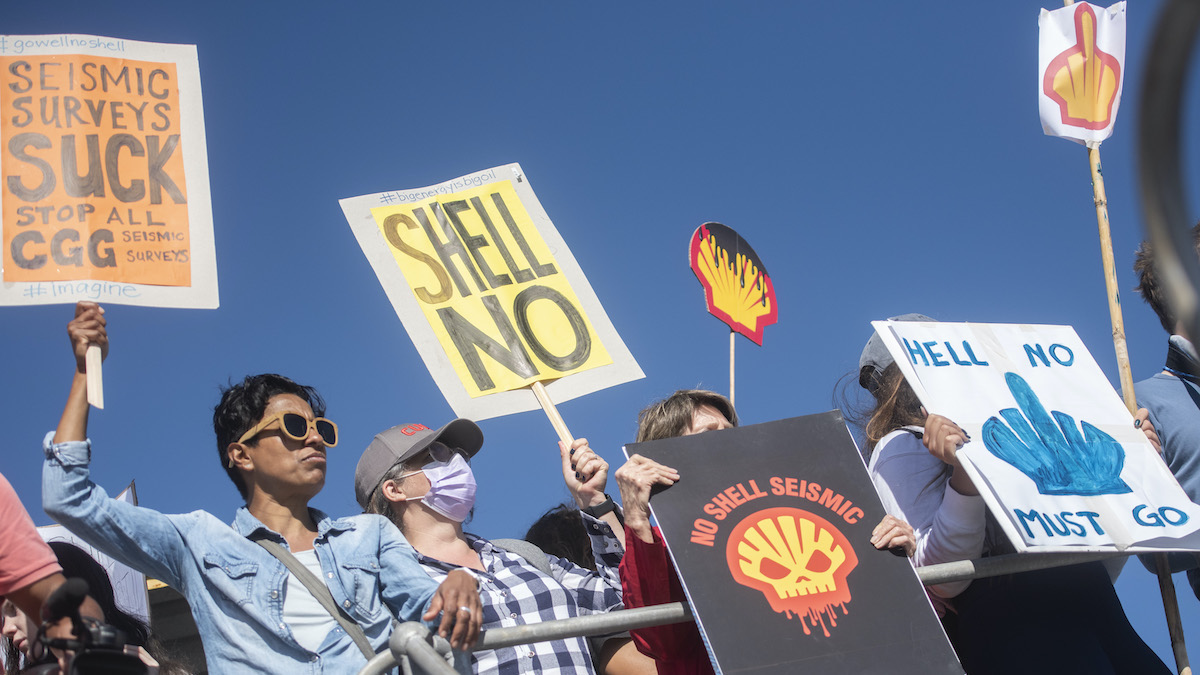 Impact Africa, the Minister of Minerals and Energy and Shell have lodged an application for leave to appeal the Makhanda High Court ruling that stopped the unlawful oil and gas exploration off the ecologically sensitive Wild Coast. The court found that the Department of Minerals and Energy had failed to consider the communities’ spiritual and cultural rights and their rights to livelihood, the potential climate change implications, and the anticipated harm to the marine and bird life along the Eastern Cape coast. Various organisations have raised on the rapacious nature of the appeal, including Greenpeace Africa, yet Mantashe and his crew persist in this pointless and harmful exercise. It would be better to direct their energy to sorting out Eskom and the energy crisis in South Africa. – Sandra Laurence

Coastal communities and NGOs must return to court as Shell, Impact Africa, and the Minister of Mineral Resources and Energy seek leave to appeal the judgment that stopped Shell and Impact Africa’s unlawful oil and gas exploration off the ecologically sensitive Wild Coast.

The Wild Coast communities and environmental NGOs that recently won a landmark judgment setting aside the exploration right that enabled Shell to conduct seismic survey explorations for oil and gas off the ecologically sensitive Wild Coast must return to court following the lodging of three applications for leave to appeal. On 20 September, Impact Africa lodged an application for leave to appeal the Makhanda High Court ruling, and the Minister of Minerals and Energy and Shell lodged similar applications today (22 September).

The tightly-reasoned judgment of three judges of the Eastern Cape High Court of 1 September 2022, was internationally recognised as a resounding victory for social and environmental justice. The judges found that the granting of the exploration right and its implications had not been made known to affected communities and that “the mere ticking of a checklist” did not constitute meaningful consultation. The court set aside the decision to grant the exploration right on the basis that it was procedurally unfair, but also noted that it failed to pass muster on several other grounds, including the failure to take account of relevant information, including climate change and the right to food, a failure to take account of the Integrated Coastal Management Act (ICMA), and the failure to comply with various legal requirements such as the requirement to create opportunities for historically disadvantaged people to participate in the minerals and petroleum industries.

The court found that the Department of Minerals and Energy had failed to consider the communities’ spiritual and cultural rights and their rights to livelihood, the potential climate change implications, and the anticipated harm to the marine and bird life along the Eastern Cape coast. It held that Impact and Shell bore the onus of showing that the precautionary principle should not be applied when experts differed on whether the adverse impacts of the seismic surveys were adequately mitigated.

In short, the court found in favour of the applicants on all the grounds of review.

The application was brought by Wild coast residents and fishers, the Dwesa-Cwebe Communal Property Association, and the NGOs Sustaining the Wild Coast NPC and All Rise Attorneys, who were represented by the Legal Resources Centre and Richard Spoor Attorneys.  They were joined by Natural Justice and Greenpeace Africa, represented by environmental law firm, Cullinans and Associates, which had launched the first application to interdict the seismic survey. The court commended Natural Justice and Greenpeace Africa for joining this litigation rather than continuing with separate review proceedings as they were entitled to do.

Critically, the judgment put paid to allegations that the communities are simply anti-development and drew attention to the fact that a proper assessment of whether such oil and gas exploration was needed and desirable had not been done and the claimed benefits were unsubstantiated. It found: “No detail to substantiate these claims; no explanation as to how the jobs will be created, how the economy will be stimulated, or how the seismic survey will improve socio-economic circumstances in which most South Africans live, are provided.”

Shell, Impact Africa and the Minister are seeking leave to appeal on various grounds. Notably, they argue that the public had been properly notified of the decision to grant the exploration right and that the court should not have allowed the decision to be challenged so long after it was made. They also argue that the court was wrong to deal with exploration as a step in a single process that culminates in the production and combustion of oil and gas and was incorrect in applying the precautionary principle to the expert evidence on the harms of seismic surveys. Shell also argues that the court was wrong to conclude that the public statements made by Minister Mantashe gave rise to a reasonable apprehension of bias and that lodging an appeal to him would have been an exercise in futility.

“The Makhanda High Court judgment found Minister Gwede Mantashe to be biased in favour of the oil and gas industry. Shell, Impact Africa and Minister Gwede Mantashe want leave to appeal so that they can continue investing in increasing South Africa’s reliance on fossil fuels and exacerbate the climate emergency.  It is dangerous and irresponsible to continue with activities that drive climate change and will contribute to untold suffering in Africa. As the UN Secretary General stated in April this year “We are on a fast track to climate disaster….  . … This is not fiction or exaggeration.  It is what science tells us will result from our current energy policies. …. … Some government and business leaders are saying one thing,  but doing another.  Simply put, they are lying.  And the results will be catastrophic. This is a climate emergency.”1

“We are confident that our team of advocates and the combined efforts of the attorneys of Cullinan and Associates, the Legal Resources Centre and Richard Spoor and Co, will successfully resist this further attempt to legitimise harm to human and ecological communities of the Wild Coast in the pursuit of fossil fuels.”

Cullinan and Associates attorney, Ricky Stone, says: “Seismic blasting poses an immediate threat to South Africa’s rich marine life, but the eventual extraction and use of oil and gas likely to follow such exploration will have even more profound impacts.  It would be critical to focus instead on renewable and natural energy sources and leave the oil in the ground and the gas beneath the sea.”

Delme Cupido, Southern Africa Hub Director for Natural Justice, believes: “It’s disappointing that the regulator – Minister Mantashe, has chosen to appeal the historic judgment of a full bench of the High Court, which recognised and affirmed the rights of communities to be properly consulted on developments that will impact on their livelihoods, food security and cultural and spiritual rights. Aside from the known devastating impacts of climate change, the potentially irreparable harm to marine and bird life, and the failure to consider the applicable legislation, Shell, Impact Africa, and Minister Mantashe are intent on disregarding the lives and the rights of the local and indigenous communities, who are waging this battle on behalf of all of us, and for the future of our planet.”

While Greenpeace Africa Climate and Energy campaigner Thandile Chinyavanhu said: “Greenpeace Africa is disappointed that Minister Mantashe has made his bias clear: he is on the side of profit, not people. Seismic blasting off the Wild Coast will only destroy the lives and livelihoods of the people who live there. It is delusional to think that fossil fuels will save unemployed South Africans, solve the energy crisis, or provide decent employment for the people of South Africa. In reality, extracting more fossil fuels will only drive us deeper into the climate crisis. A just transition to renewable energy is the best and most immediate solution to South Africa’s problems. We will continue to resist the lies peddled by fossil fuel companies, in and out of the courts.”

Cullinan says: “If we want to see the end of load shedding, we cannot wait more than a decade for costly, harmful mega-projects to come on stream. Energy modelling proves that renewables are the quickest and cheapest way to get much-needed capacity on to the grid. The South African economy cannot afford more investment in wholly unnecessary fossil fuel infrastructure destined to become stranded assets.”