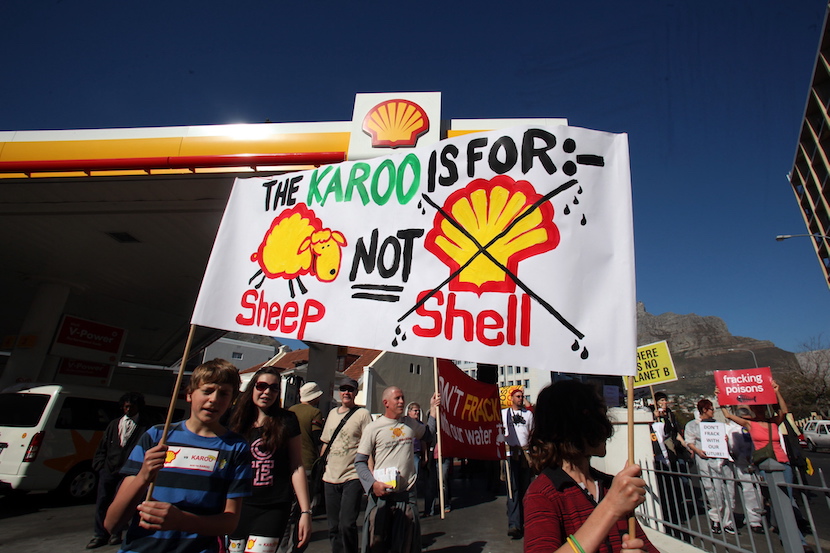 If it’s true we’re sitting on a gas gold mine in the Karoo but have effectively acquiesced to the green lobby by putting an embargo on extraction, this analysis is pertinent. Accepting it is one thing, but expecting our government to step aside and let private sector efficiencies and enterprise kick in to help jumpstart our economy is quite another. The ruling party is the chief reason why the Fraser Institute rates us as among the world’s 10 least attractive mining jurisdictions. Writing for the Free Market Foundation, Keith Bryer asks how much it cost taxpayers to find the massive gas deposits and why we’re not extracting them in the current globally constrained, war-threatened environment. His exhortation to government to butt out? (When there’s another honey pot for the taking?) Well, there’s more chance of AfriForum joining the ANC. This article was first published in the EP Herald. – Chris Bateman

According to the Department of Mineral Resources (DMR), “South Africa has an estimated 390 trillion cubic feet (tcf) of technically recoverable natural gas that can be extracted from shale and this is embedded in the Karoo Basin.”

That potential bonanza was announced in May 2021. But the possibility of large amounts of shale gas being buried under the Karoo had been known for some time.

Also well known were the means of getting at it. The United States proved it and was exporting gas to the world, having previously been an importer.

The DMR was aware of the possibilities of doing the same here. The Minister concerned, Gwede Mantashe, had six months before he proudly told Parliament his department had discovered pockets of shale gas in the Karoo Basin. “I am pleased to share with this house that as of yesterday, we had drilled to a depth of 2,750 m,” he said.

He added, “The first pocket of gas was intercepted at 1,734 m with a further substantial amount intercepted at 2,467 m spanning a depth of 55 m. To date, a total of 34 gas samples have been bottled in canisters and taken to one of our laboratories for analysis.” An exploratory hole had also been dug previously down to 3.5 km.

Anyone familiar with the costs of drilling to that depth, let alone paying for another one almost as deep, would know the effort could not have been cheap; especially when measured in taxpayers’ money that had to be earned before it was paid over to the state.

Was this money well spent? That is but one of the questions that come to mind two years later, what with the war in Ukraine causing a massive hike in the prices of crude oil and gas. It is after all causing sleepless nights in households around the country and the world. People everywhere know that fuel costs reverberate negatively in every sector of the economy.

With no sign of shale gas coming to the surface and into our economy, which is gasping for cheaper energy, more questions need answering. Top of the list is why a government department is using taxpayers’ money to drill holes to find natural gas when oil companies or private companies’ investors would do the job without taxpayer help?

Another question: what has happened to the glorious gas find since it was announced to Parliament? The answer appears to be nothing much. Perhaps the green money from the European Union has been allocated to wind and solar plants? We cannot put that in our lorries, our cars, or our boilers – yet.

But if we had removed the bureaucratic finger from the shale gas pie and let the private oil companies have free rein to drill where they liked anywhere in the Great Karoo, instead of imagining all kinds of an ecological disaster if they were so allowed, then maybe today we would not be staring at fuel price inflation that may close more companies than even the Covid Command Council managed.

Has the Treasury stopped this meddling by a government in an area where it has no expertise? If so, then the possibility of a course change in energy policy might be in the offing. One can only hope.

Of course, common sense would have to prevail first. It would mean doing things the government might balk at if its history is anything to go by. The first is to allow private exploration for shale gas to take place anywhere in the Great Karoo (except declared nature reserves) without government regulatory interference other than post facto when all pollution and environmental damage would have to be accounted for by the drilling company which would have to take out insurance against the risks. A 10% share of all gas found would have to accrue to the landowner. The state would have to not be greedy or tardy in issuing licences either.

A second thing would be for the state to wave its ownership of any gas found. In return, the state would insist on private ownership and burying of any gas pipeline required to transport the gas to market. In short, to find and develop our shale gas reserves, the private sector – driven by a profit motive – should be left to do the job.

If history is anything to go by, it would be like a Gold Rush: fast, messy, but effective.

Of course, a few muzzles for those who shout the loudest against such decisions may be required, but since this is a national emergency every bit as significant as the shambles of Eskom and the railway system, why not?

In light of the sanctions on Russian oil and gas, Britain is said to be about to lift its embargo on fracking for gas. Northern England is estimated to have more and better quantities than those of the United States. So, why not lift our embargo on drilling for gas as well?

But whatever we do, there must be less government interference in the process, not more. Otherwise, we will still be waiting for action for another two years or more.

That is the hard truth of it. Sitting on a gas goldmine is beyond stupid at a time like this.