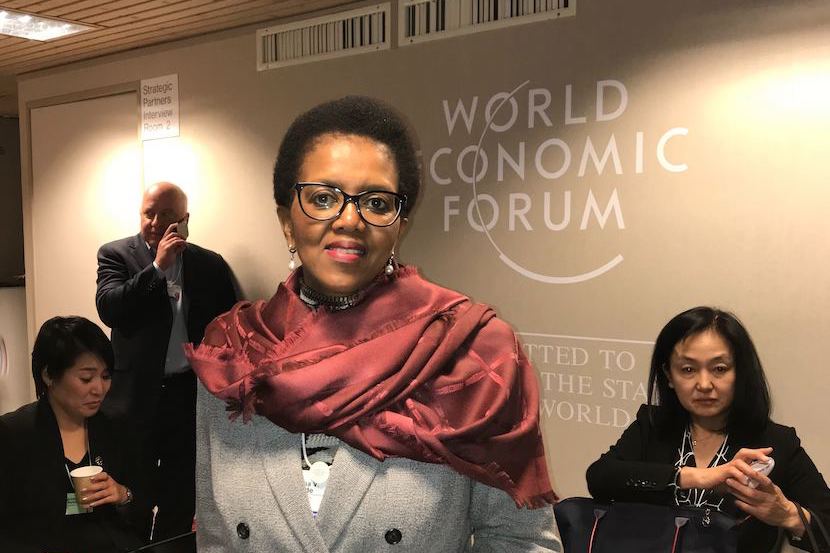 In December, South African miners were hit by the country’s biggest blackouts as Eskom implemented ‘stage 6’ blackouts for the first time. It forced some of the producers, including Sibanye-Stilwater and Petra Diamonds to close their underground mines, and prompted the mining industry to ask Mineral Resource Minister Gwede Mantashe to allow them to build their own power plants. They estimate that they can generate 800MW of conventional power and 800MW of solar power. Speaking to Biznews in Davos at the World Economic Forum, Nolitha Fakude, the Chair of the Managing Board and Group Director of Anglo American in South Africa, said the mining group was currently engaged with Eskom and the Government, talking about the self-generation of power and looking at pilot schemes. – Linda van Tilburg

This coverage of the global conversation on change is brought to you by BrightRock, the first ever needs matched life insurance, that changes as your life changes. Anglo American’s Nolitha Fakude is with me, Nolitha how is mining group managing the current challenges being faced in South Africa?

Is Anglo one of those mining groups that would like to generate its own energy?

We are exploring opportunities, there’s an opportunity we’re looking at in the platinum businesses in Limpopo around solar energy, so it will be clean energy and renewable energy, and it also fits in with our global strategy of being in a position where we eventually get to net zero carbon emissions.

Is the move towards green part of your mission statement?

It’s part of our broader commitment to ensure that we’re going to reduce our carbon emissions.

Right now the government doesn’t allow companies to generate their own energy. Are you speaking to them about that?

We’ve been engaging with government – especially the Department of Mineral Resources – and they have been partnering with us in making sure that some of the technologies that we’re looking into are appropriately piloted.

So if you look at a specific mine, how have the power cuts impacted them?

It’s about planning the energy use. Eskom has got different tiers of customers, so for the intensive energy users, like mining and manufacturing, they normally discuss the loadshedding plan, so we know about it. It is frustrating obviously and a challenge, however the predictability is good so one can plan accordingly.

You’re part of the minister’s delegation, how are you finding the Davos reception this year?

I wasn’t here last year, however in my previous engagements in Davos with different businesses and also investors, I think one has got to understand the whole essence of Davos. It’s not only just coming in to talk about today. It’s about talking about the future and possible partnerships. I’ve found that the various engagements we’ve had with people have been around the trends that are coming in the future and to make sure that South Africa’s voice – as a country and also within the continent – is being head.

Do you think it is being heard?

It depends which conversations you participate in because, as I’m sure you’ve noticed, there are more than 30 topics to choose from in one day. You’ve got to understand what the priorities are for you as a country and then make sure that your voice is there. I believe that as a South African, which is part of the African group, we have good conversations. The session we had this morning around the Friends of African growth, with different heads of states, was also an important engagement because you’ve got to understanding how our role, as a country – and also within the continent – can impact world conversations and get opportunities for us to be part of the growth. For me Davos is that platform. It’s good to see more diverse partners coming through, it’s also good to see more women in the different sectors, because between business, governments, civil society and all the young people that are part of Davos, means we are seeing the world for what it should be.

And especially young women. What do you say about that?

It’s very exciting to see more young women here. Younger women, because they are shaping the future and it’s good to know that the future is being shaped by both men and women.