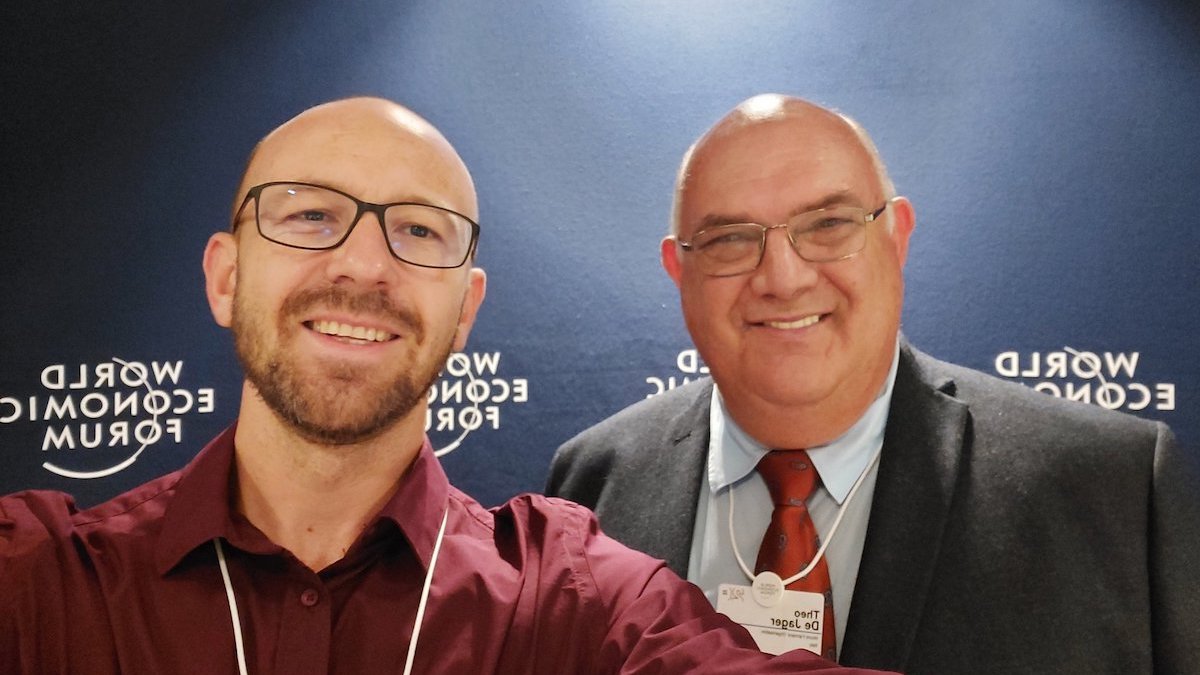 He’s not a man to mince his words or shy away from asking tough questions of governments across the world. BizNews caught up with Dr Theo de Jager, a South African who has been heading up the World Farmers’ Organisation (WFO) as its president for five years. The world is in the midst of a food crisis that has been exacerbated by the war in Ukraine. De Jager, a delegate at the World Economic Forum (WEF), emphasises that organised agriculture needs to sit around the table with the world’s decision-makers as a perfect storm of skyrocketing food and energy prices will soon see attention change from food prices to food availability. More too from De Jager on the state of the agricultural sector in South Africa, expropriation without compensation, and crumbling infrastructure … all of which compound the difficulties farmers face in the country. – Michael Appel

Twenty-four hours after I was elected, I wanted to run away. The farmer’s constituency is not the easiest constituency to organise, but it is the oldest in the world. It is the biggest profession in the world, and I think it’s one of the best organised professions in the world. But no two farmers farm the same. The interests of no two countries are the same. And just like on any other level, the main function of the World Farmers Organisation is to influence policies. We do advocacy; we just do it at an international level. But we influence policy. You need to have policies that ask for consensus among farmers. That is the toughest part.

I am running from meeting to meeting, and the topic of all of these meetings is this food, energy and financing crisis and the three do not come to the world in compartments. It is one package. But the food crisis is the most desperate one. As the head of the World Food Programme, David Beasley, said on Sunday evening – and at the moment we feel it in the price of food – that in 18 months, we will feel it in the availability of food because we need to plant now for the next season. At the current price of fertilisers, diesel, agrochemicals and even seed, farmers wonder whether the price they receive for the products will cover these current high input costs. So, because of the type of risks farmers are exposed to, the farmers would rather plant less while they should really plant more. My message at the World Economic Forum is: the world must come onboard; the private sector must come onboard. Farmers cannot carry this risk alone. Right now, we need special financing mechanisms to assist farmers to plant more. We need special financing mechanisms to assist farmers to plant more. And that mechanism must be patient, sympathetic capital.

On how the war in Ukraine is affecting the shortages

Forty million tonnes of grain is currently stuck in Odessa. It is the Arab-speaking countries in the world, in particular, that are already in a massive crisis. That part of the world lives in desert environments and cannot really feed their own populations from the breadbasket; they need to exchange with other sectors of the economy to buy food. And the majority of them were dependent on Ukrainian and Russian grains. Remember, Russia is also the massive producer between the two of them. They are responsible for close to 30% of all the grain that crosses borders. So it is the war. But before the war, we already had a crisis. The price of fertilisers and diesel was already through the roof, just after or towards the end of the Covid-19 pandemic. Now the world is rushing around to see how they can [make up the shortfall]. How can they plug the gap that the Ukrainian greens have left?

There is a lot of smallholder farming in Africa, which is over-romanticized by NGOs and even policymakers in the debates here this morning. I was in a debate where I just shook my head and said, no one chooses to be a smallholder farmer in Africa. The vast majority of them never chose agriculture as a career. Life just found them. And it’s a poverty trap in the sense that they do not own the land. They do not have access to financing. They do not have proper equipment.

They want to run away from it at the first opportunity they get. We must commercialise that sector. We must mechanise it. We must modernise it. We must give them a market. Only then can we fight the dragon of poverty because there is only one way to fight poverty, and that is through the creation of wealth. But agriculture can do it. It can do it in a short space of time, on a broader basis than any other sector.

On the state of agriculture in South Africa

May I be as arrogant as to say we really have some of the most competent farmers in the world in South Africa. They are a very special breed of people who compete for space on shelves, in shops globally, with zero assistance from the state. They also face more risk than the average farmer in the world because we also have a security situation of farm attacks and farm murders in the numbers we see in wars. We fight off the threat of expropriation without compensation all the time. But apart from that, who? We still maintain a status as a net exporter of food. We have never had a national food crisis in South Africa. At a household level, we have food insecurity and it needs to be addressed because nothing stops a hungry man. But we still maintain our status as a net exporter of food.

On the difficulties in exporting as a farmer in South Africa

You know, the export market is an absolutely sophisticated, challenging market. You have to meet the highest standards in the world. Every day, every farmer is in competition with the best farmers in the world, especially in the export markets.  We have ports in South Africa but they are so dysfunctional that some export farmers this year decided to change to new commodities simply because they cannot get the table grapes through the port. They cannot maintain the cold chain as they should. It is a major concern just to get a slot in ports. And then you have to get your fruit or your product there in the kind of condition demanded by the export markets.

No. The government prefers to speak to farmers. Farmers’ structures would agree with a view that they don’t like people asking difficult questions. As soon as you do that, you are usually excluded from the debates. A few [organisations] in the environment in which I operate in South Africa, have decided to keep on asking these difficult questions and knocking on the doors until they [listen to] the more critical voices. For example, we have just seen the signing of a master plan for agriculture last Thursday in Parliament. There is some beautiful stuff in there, but all of it hinges on the condition of transformation.

Even the profitability and the sustainability of agriculture; if you put transformation before efficiency, you end up with what we now have in Denel, our public health system, Eskom and the SABC. Several of our organisations simply said no. Put efficiency first, [before] profitability and sustainability. Then you have something to transform. And it’s not only the predominantly white structures who are calling for this. More and more successful black farmers say we want a healthy policy environment and, for us, a healthy policy environment is one in which we can farm profitably. If it’s not profitable, it is simply not sustainable.

On the big land question: expropriation without compensation

We can be successful in land reform if we can keep it corruption free and nepotism free. If we can unlock the wealth on millions of hectares owned by the government. Government bought so many farms in the last 10 years, which they have never transferred to black farmers. This is why they did not create the class of profitable black farmers, which should be the ultimate aim of land reform. And the most successful stories of farming development in our countries are driven by the private sector, mostly the agricultural businesses, most of them based on Chapter Six of our National Development Plan: the partnership-driven model. I think land reform would go much further if they privatise it.

It is definitely not that we are in a wonderful position financially. It’s not the fact that we represent more farmers today than any other organisation ever represented in the world, both in terms of our members and their members. We do not represent all the farmers in the world, but no one represents more farmers than we do. It is definitely also not that we found a place around the table on every multilateral platform. Agriculture is discussed today, whether it is the UN General Council, the UN, if it’s Trabelsi or any of the other UN agencies or platforms like that.

The most important, I would say, is that we managed to establish a sense of camaraderie, the sense of belonging among family farmers across the globe. We get to see it in the current campaign to do something about climate change, biodiversity and nature-friendly farming – not through any decision in the UN or the EU – but in a farmer-to-farmer agreement, to take care of our soils. A commitment among family farmers that they will leave this portion of the planet – of which they are the custodians for a very short time – in a better condition than they found it for the next generation.