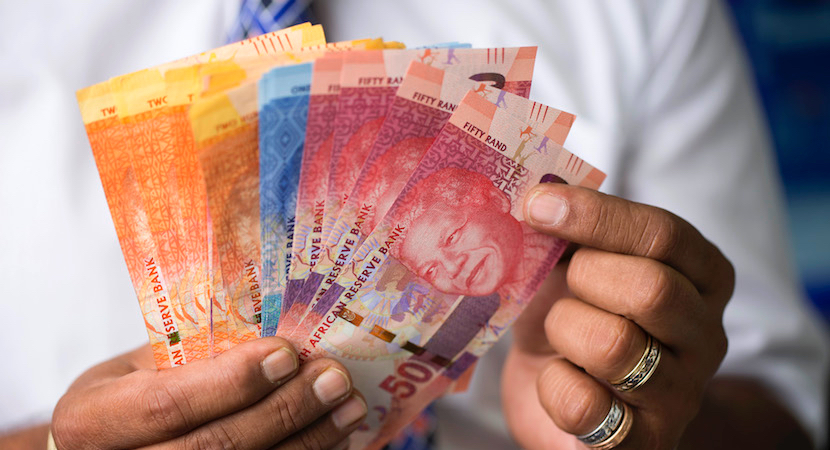 JOHANNESBURG — Because many of South Africa’s neighbours – like Namibia – peg their currencies to the rand, these countries are starting to feel the heat economically. This year, the rand has continued its trend of being among the world’s most volatile currencies. From a strengthening position at the peak of Ramaphoria earlier this year to wild weakening positions amid questions over land reform and a recession, the rand is probably one of the worst currencies in the world to be pegged to. – Gareth van Zyl

(Bloomberg) – South Africans aren’t the only ones struggling through the country’s economic slump.

The fortunes of Lesotho, Namibia, and Eswatini, formerly known as Swaziland, are beholden to developments in their larger neighbour with their exchange rates pegged to the rand, the worst-performing major currency against the dollar this year. The three nations, together with Botswana, also derive revenue from a customs-sharing pool that gains and falls on South African trade.

The continent’s most-industrialised country is struggling through a recession, but the central bank is hamstrung in cutting its key rate from 6.5 percent as it strains to contain inflation spurred by higher oil costs and a 13 percent drop in the rand versus the dollar this year.

That’s made it tough for officials in Lesotho, Namibia, and Eswatini to stimulate sluggish activity through looser monetary policy because they have to keep their rates in line to maintain the peg. Botswana, whose currency isn’t tied to the rand, has cut its benchmark to 5 percent.

“Lesotho and Swaziland remain very susceptible to the effects of regional developments,” said Jee-A van der Linde, an economist at Paarl, South Africa-based NKC African Economics. With South Africa being the largest contributor to the customs union, revenue for other countries “is therefore likely to be lower in the near term,” he said.

Receipts from the 108-year-old Southern African Customs Union – the world’s oldest such arrangement – account for about 40 percent of government revenue for Lesotho and Eswatini, and about 30 percent for Namibia and Botswana. South Africa has paid an average of almost R50 billion ($3.5 billion) to the pool in each of the past four fiscal years.

South Africa’s National Treasury has reduced its estimates for payments to SACU this fiscal year and next, and there is “material downside risk to these forecasts” because the economy isn’t expanding as much as first predicted, said Mamello Matikinca-Ngwenya, the chief economist at FirstRand Ltd.’s First National Bank retail-lending unit.

All the economies in the union, barring that of Botswana, will expand by less than half the 3.1 percent average rate the International Monetary Fund forecasts for sub-Saharan Africa this year, the IMF said in an October report.

Namibia’s economy shrank for a ninth quarter in the three months through June, the longest streak of contractions since at least 2008. While the central bank usually mirrors moves by its South African counterpart, it diverged from this in April for the first time since 2015, holding its key interest rate at 6.75 percent. It did this to entice investors to keep money in the nation, helping it to build currency reserves, Governor Ipumbu Shiimi said at the time.

The Namibian dollar would be highly vulnerable to external shocks if it were to break the link to the rand, due to Namibia being a small economy with highly concentrated industries and exports, said Gerrit van Rooyen, an economist at NKC.

While Namibia has a developed mining industry, the country – bigger than France by land area – has a population of just 2.6 million people. Botswana is Africa’s largest producer of diamonds, income that has helped it progress into one of the continent’s most wealthy per capita.