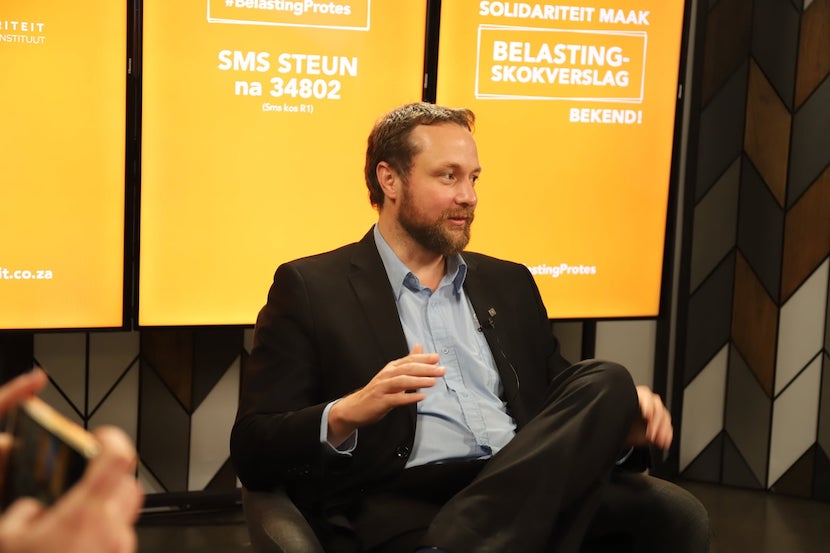 References to a tax revolt have surfaced on a number of occasions recently over warnings that tax morality could suffer if corruption remains unchecked. One of the organisations that is taking the government on with a campaign to make sure that their members and other taxpayers pay as little tax as possible, is Solidariteit. They have just released a Flash report on South Africans tax base and say that only 3.4 million people, that is 5.8% of the population, is paying 91.8% of all income tax.  Connie Mulder, the head of Solidarity’s Research Institute told Linda van Tilburg about their research and the campaign they are planning to launch in South Africa and overseas.

Connie Mulder on the South African tax base:

So on the 18th of August, the Minister of Social Development published a green paper on the Social Security fund. This caught us by surprise. We immediately saw that the implications of this green paper are actually quite big if they’re talking about a basic income grant of R7,500 per month for every citizen of the country, that’s 60 million people getting R7,500. And who’s going to fund that? That’s the question that started off all this research. So we then specifically went into data that we’ve got – we know what our members’ demographics look like. We used the general household survey from Statistics South Africa to get income levels for what would be our members, generally people with a job. We used National Treasuries budget review to get the taxpayer numbers and the tax brackets and then we used the white paper for the National Health Insurance, as well as the green paper in its original form. They made several suggestions regarding how you can fund this. We then divided our members into tax brackets and then just applied the changes that the government would make and came to the conclusion that if you’re in this tax bracket, this is what you’re going to be paying more. Second thing we did is we actually divided South Africa by income into deciles. So zero to 10%, 10% to 20%. And we then went and created a hypothetical scenario for somebody in each of these deciles and said – alright, if you’re earning R8,000 a month, then we use the CPI numbers from Statistics South Africa, that basket, saying you’re generally spending this percentage on accommodation, this percentage on food. And then we went further and said, but let’s see what’s the tax on all of these things? Not everything food related has VAT on it, but a lot of it does. That’s where we came to the conclusion regarding what is the actual tax burden of somebody in the different deciles. That’s the shocking number. The first one is the three million. The second one is that if you’re in decile ten, in which basically all taxpayers are – every single one who pays tax is in decile ten. If you’re earning R8,000 a month, you’re almost in decile ten already. 42.5% of your income goes to the government in tax charges. If we try to demonstrate it to people, if you’re at work at 8:00 – you are working for the government until 11:24. After that, you start earning money for yourself. And that’s because of every single type of tax that you pay. We’ve got VAT, income tax, corporate tax, tax on petrol and tax on alcohol. All of these things add up to a massive tax burden. Tax to GDP South Africa is second in the world, only behind Sweden.

On how our tax base compares to countries in Sub-Saharan Africa:

We’re extremely, extremely taxed relative to Sub-Saharan Africa. I think Sub-Saharan Africa – which would be a better comparison – has a tax burden of about 18% tax to GDP and South Africa is around 20% to 30%. We’re taxed more than double relative to the comparison that we should have. There is a caveat that says we’ve still got a lot of infrastructure development, which means you would expect governments building roads to tax citizens more. It’s not like we’re in a worse infrastructure position than Botswana or Mozambique even with our existing infrastructure. We’re still taxing our citizens at almost double the rate that we would expect. If we are looking to the developed world, which South Africa does have a developed economy to a large extent, then we’re way, way above. It should be around 10% tax to GDP and we’re at almost 30%.