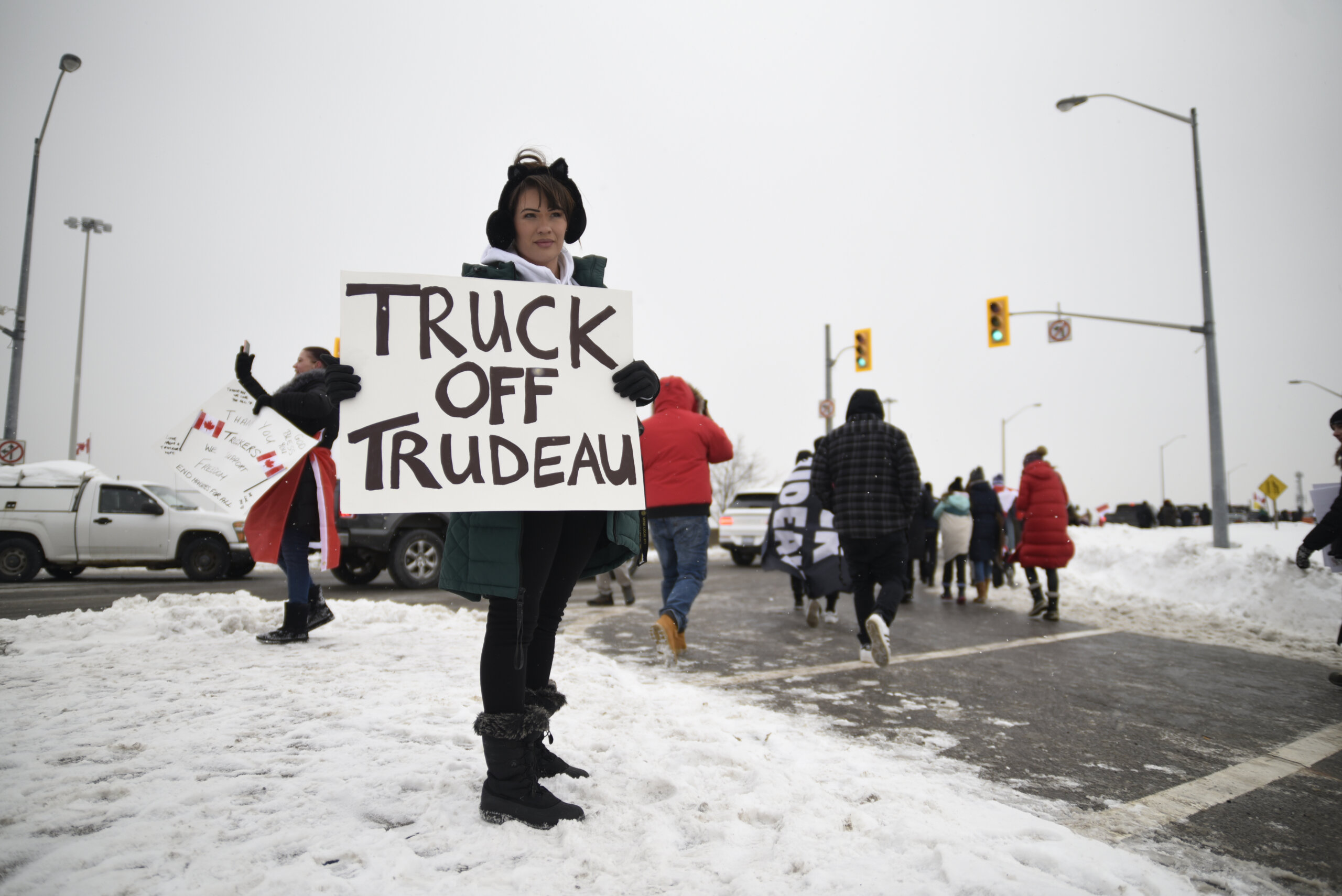 You don’t mess with truckers. Love ‘em or hate ‘em, they get a job done. They’re the subject of a hilarious spoof by SLR this week in an imaginary telephone chat between the Canadian PM and the World Economic Forum head honcho. The truckers angrily believe Covid-19 vaccine mandates threaten their livelihoods and freedom and literally became a danger to shipping (i.e. land-based goods, the lifeblood of US/Canadian trade). Leaders of both countries were on their knees in frustration witnessing truck-choked key arterial highways, creating tinder for anti-government protests in both countries and copy-cat blockages elsewhere. Trudeau eventually liberally applied his version of ‘motion lotion’. While SLR is no tjom of redneck, tattooed brekers, he loves how they put hypocritical, out-of-touch political leaders on the spot. Who doesn’t love a spot of political discomfort for out-of-touch, elitist leaders? Renders me unsure of whether SLR is a closet truck driver who writes books or a writer who drives trucks. – Chris Bateman

TRUDEAU: “Oh hi there, Your Excellency Lord High Chancellor, what I am doing? I was just by myself, planning on doing some kneeling just now as there are some cameras out…”

SCHWAB (Interrupts):  “I am very much in pained to vutch you being kompletely outmuscled and outklussed by viz smelly unvashed truck peoples! Remember ven you vuz breaching ethiks kode of konduct lust two years? I tell you zen: if you vunt to korruption, DO QVIETLY, same advice I am offer to ANC in Zous Afrika (zey not listen eizer… is not problem because Davos guaranteed to selling 500 tikets to impoverished governments departments for highest tier price includes food and drinking even ven forum is only on internet – duh)!. Anyvays vere voz I? Ah, yez, you are such disappointment. Ozer leaders doin EKZACTLY vot I am telling zem. Lust veek, I sneak into Merika to check up on zat Valter Mitty President in Vite Haus, and I see Jill, sorry, quotation mit fingers, ‘Doctor’, Jill Biden playing aeroplane aeroplane viz ze spoon for feeding the President ze warm milk. Zee, my plan is work. He kontrol by ze younger, former WEF leader graduates – my children. Now, speaking of children, KRUSH ZE TRUCKERS! KRUSH ZEM LIKE YOUR REAL FATHER KRUSH ZE HOMOSEXUAL IN HAVANA!”

Alright, boys, that’s enough already. I personally don’t think Fidel Castro is Justin Trudeau’s real father … I’m more inclined to suspect it was Josef Fritzl. Whatever the case may be, I believe the late poet Reinaldo Arenas – whose autobiography Before Night Falls documents the human rights abuses committed against gays and lesbians by Castro’s regime – is looking down from the heavens none too impressed with Canada.

Yesterday, Trudeau unleashed a state of emergency on that country, accusing Freedom Convoy participants of terrorism. These powers extend beyond the usual emergency prescripts and cheerfully venture into sweeping financial grabs. They are the type of things you would impose should ISIS or Al-Qaeda blitz a city like Montreal, but Trudeau prefers to have tea with, then pay those sorts of people lots of money, as is the case of Omar Khadr, whom he awarded $10.5m for killing a US Army sergeant in Afghanistan.

Trudeau is given a free pass by much of the world’s liberal commentariat, probably because he wears socks decorated with the symbols of Ramadan and sneers at or insults anyone he deems racist, despite having blacked-up in the old Kiwi polish more times than he – by his own admission – can remember. Despite having a series of odd jobs, including being a nightclub bouncer, Justin Trudeau’s life has been one of exceptional privilege. It’s unlikely he’s ever met a trucker.

The liberal commentariat, which in Canada’s case is not owned but more strategically leased by Trudeau’s government, really has done itself a mischief here. The vast majority of prestige media’s profiles are people armed with qualifications, who’ve exited institutions where the prospect of a ‘worker uprising’ has been romantically encouraged. But in the face of an actual worker uprising, truckers in Canada have been met with ad hominem smears, 99.9% of which are demonstrably false, betraying the kind of fake leftism today’s education standard demands its subjects build their lives upon.

This is how coof ends lads, not with a sudden bang but rather a series of desperate but no less breathtaking power snatches, like leaks from a container of acid. Don’t take it from me: the organiser of Occupy movement, a woman who studies resistance movements, has declared the Freedom Convoy unstoppable (former members of Occupy now hold senior positions within the US Government). Considering that Occupy featured in the late 2000s, the consequences – for tech firms like GoFundMe, for now-anti-liberty institutions such as the ACLU, for the lockdown enthusiast politicians and the academic expert elite – will not appear overnight but when they do, be under no illusion: things will get messy. Messy like Jacinda.

It didn’t have to be this way but if it’s truckers who kibosh on the unintelligible, hyper-elitist chapters of the so-called Great Reset and enable the downfall of parties intent on using coof to centralise power, well, we’ll take it won’t we?