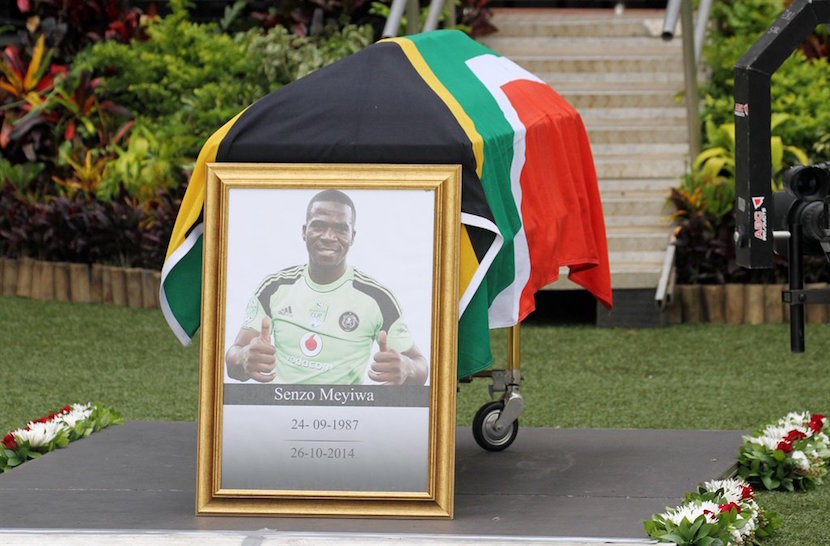 It has been eight years since Bafana Bafana goalkeeper Senzo Meyiwa was shot and killed in Vosloorus, Gauteng at the house of his girlfriend, Kelly Khumalo. When no progress was made in the investigation of the murder, Meyiwa’s family turned to AfriForum’s private prosecution unit for help. They appointed Gerrie Nel, the advocate who successfully prosecuted Oscar Pistorius, also known as the Pitbull, to represent them. The family said they were proud to be associated with an organisation that has the courage to take a stand with them in the fight for justice in this matter. In his weekly musings, Simon Lincoln Reader blasts the liberal media in South Africa who have described AfriForum’s involvement in the trial as naked opportunism and says the movement’s is critical. He suggests watching Netflix’s documentary on the murder, Senzo: Murder of a Soccer Star by director Sara Blecher, who appeared to be more accepting of AfriForum’s role in the prosecution. – Linda van Tilburg

The Senzo Meyiwa documentary arrived via Netflix in the UK last week, alongside another documentary entitled Jimmy Savile: A British Horror Story. Savile is a nuclear embarrassment for the liberal establishment here, particularly the BBC, many of whose employees still reportedly defend him; this, despite nurses’ testimony of how he nonced dead bodies in the Stoke Mandeville hospital mortuary, stealing glass eyes from the heads of departed paraplegics to add to his jewellery collection.

It also happened in the same week that Beijing24’s dwarf assassins were – true to form – beastly about AfriForum, this time procuring the services of an academic (Queer Theory) to compare the organisation to controversial Bantustan policies.

When it was announced, AfriForum’s alliance with prosecutor Gerrie Nel was rubbished, despite the prevailing sentiment contemptuous often of the dysfunctional criminal justice apparatus. There was never any evidence of a political agenda in Kallie Kriel and Nel’s decision to support Senzo Meyiwa’s family but that didn’t interrupt muttering from South Africa’s liberal media quarters. For these people, the move was naked opportunism. For the rest of us, whatever could be done to extract justice from this particular mangled wreck of a tragedy was necessary, critical.

So, there was (not unreasonable) concern the documentary’s director Sara Blecher, like so many, formed her world view from Beijing24’s editor on Monday mornings. Netflix is far more influential than that failing Vox cut-out, and any hostility to AfriForum would correspond with the hysterical social justice features that those streaming giants indulge themselves in nowadays. Happily, Blecher and her team were clearly far too smart to do something so stupid, despite one anecdotal remark about “land thieves”. South African journalism comes across surprisingly well, thanks to the expressions of a real beat reporter in Graeme Hosken. Mzilikazi Wa Africa, previously booted from the Sunday Times for scandalous inexactitude, to his credit, seized an opportunity for small redemption with his participation.

Like you, I admire men who can hold their nerve. Some years ago, Kallie Kriel appeared on an episode of the SABC’s Big Debate. He was viciously attacked by the unhinged performance artist known as Simphiwe Dana, whose fury sounded uncomfortably similar to a spell being cast. (Ordinarily, that kind of thing at the SABC was reserved for Hlaudi, who would sit atop Auckland Park in his nice fedora, eyes rolling in the back of his head, sticking pins in little dolls of his enemies.) But throughout the unpleasant exchange, Kriel was even-tempered, refusing to return a flurry of ad hominems.

The point is not to spoil the documentary, which I would encourage you to watch or to explore the merits of the case against the suspects charged with the brutal murder of South Africa’s soccer captain (Blecher leaves more than enough room to explore here). What’s intriguing is the reception of cohesion. Why, a viewer here could ask, did an allegedly isolationist group – supposedly the vestigial tail of apartheid – volunteer to pursue the interests of the vast majority of South Africans, whose involvement undeniably defibrillated the case? To us, the answer is that familiar chasm between reporting and reality, yet another example of why fewer and fewer people trust the editorial policies of liberal media.

I would go further. Being puzzled in this way sometimes prompts curiosity. In this case, the viewer could ask: what else do maligned groups busy themselves with? To that they could find only the most successful example of community organising in recent years, Solidarity’s member-funded Sol-Tech, recently praised by Herman Mashaba and ActionSA. And should Britons reject this on the basis that the medium of instruction there is Afrikaans, they would be trashing examples of the same thing within their history; to be precise, the departure of the Roman Empire from their island.