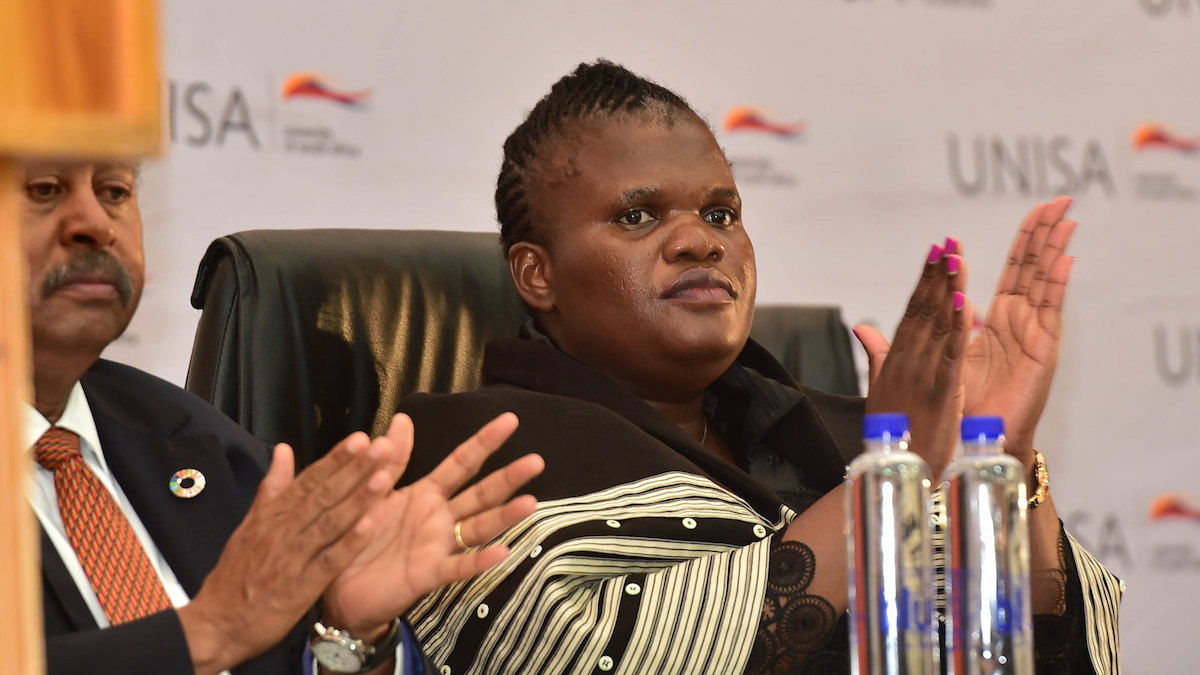 In a bad new epidemic of hypocrisy and wokedom that Simon Lincoln Reader calls an outbreak of ‘California Blue”, involving examples of cosplay disguised as activism such as “Prince” Harry’s mouthing off about climate change having just landed at Van Nuys in a Gulf Stream, Reader says he’d rather have the old-fashioned corruption of Faith Muthambi any day of the week. He imagines “Faith and her friends cackling in the back of a Hummer limousine, bursting with polony and Fanta Pine, speeding wildly in front of plumes from extremely leaded petrol en route to a party at an abattoir,” compared with UK’s fey Rishi Sunak gazing soulfully out at the ocean with a look of *deep concern* over sea levels. And he argues there’s rising intolerance of ‘California Blue’ and its symptoms everywhere, from Holland to Sri Lanka to the US. Read below for some straight-talking, politically incorrect opinions. – Sandra Laurence

Tom Bower is possibly Britain’s most popular biographer but his new book on the fracturing of the Royal Family (Revenge: Meghan, Harry and the War between the Windsors) could easily have been called The Descent of Man. More than gossip, a dramatic portrait emerges of a young man contaminated by a condition known as “California Blue”. This disease is more dangerous than Monkeypox or whatever next the WHO has in mind for us: it took a young (by all accounts, excellent) soldier with a fondness for smoking and naked billiards into the despair of cosplay disguised as activism, where everything is racist. Through Harry a great tragedy is confirmed: Western Man – the species defined by the brilliance of life in his late grandfather – is dead, and the imposter who replaced him mouths off about climate change having just landed at Van Nuys in a Gulf Stream.

I’m afraid that one of the contenders for leadership of Britain’s Conservative party and subsequently, the role of Prime Minister, is himself infected with California Blue. Prior to coof little was known of Rishi Sunak besides his marriage to the daughter of one of India’s richest men (founder of Infosys), who he met in Silicon Valley. That changed in a cabinet re-shuffle in 2020; just as things were hotting up courtesy of Wuhan, Boris Johnson appointed Rishi – Goldman Sachs alum – as Chancellor. As these kinds of detached people – terrified of tough decisions – so often do, Rishi bounced from one stinker to the next, kicking the can further down the road until the opportunity to stab Boris Johnson appeared.

Rishi is a Californian politician, but in Britain. Even before he was announced a finalist, he was replying to questions with non-answers – perhaps the most alarming was an attempt to answer the question: “What is a woman?” Instead of “adult human female”, he mumbled his way through a “erm-um-uh-I support-the-Prime-Minister’s-declaration-ah-um…” response, which is how the problems in Los Angeles County started decades ago. As one of the two finalists for Number 10 Downing Street, he declared, “I flew back from the US in 2021 to stop the government plunging the UK into another lockdown!” That statement has since been described as “categorically false” by government sources and reporters. In contrast, his opponent Liz Truss (Foreign Secretary) answered “No” when asked whether she would consider a lockdown in the event of another leak from Wuhan.

Don’t be fooled by his Brexit credentials; the Harry, or Californian Blue, is strong in him in other ways. He wants a central bank digital currency to obliterate Bitcoin. He’s a massive fan of Britain’s ailing, sclerotic (“but the diversity”) NHS. Worse – and very Californian – is his defiance of history’s documented lessons, specifically the history of finance, which shows that if you increase the circulation of cash without a corresponding increase in real supply, the end result is – ten times out ten – something called inflation.

So if it came down to Faith Muthambi vs Rishi, my cross would be next to the old girl. At least with her you’ll get exactly what you expect: old-fashioned corruption – with increasing reluctance toward discretion. Whilst Rishi is splashed across newspapers standing next to “Dr” Jill Biden staring out at the ocean with a look of *deep concern* (“sea levels”), Faith and her friends will be cackling in the back of a Hummer limousine, bursting with polony and Fanta Pine, speeding wildly in front of plumes from extremely leaded petrol en route to a party at an abattoir. Every June, the civil service will ensnare Rishi with a Pride flag – forcing him to send a tweet photo to Brett Herron, GOOD’s failed mayoral candidate, expressing sympathy  (“solidarity”) that Cape Town’s City Council refuses to use pronouns. Try to do that with Faith – see what happens to you. You won’t find her at any event hosted by unelected creepy organisations determined to instruct elected officials – or you will, but only to procure those small bottles of Scotch from the hotel bar fridge, to pair with other small bottles she took from the airline getting there. In addition, Rishi has a fondness for skinny ties – and no man should ever wear a slim Jim.

Because 95% of the world’s prestige media journalists are infected with it, this might not be readily apparent – but there’s rising intolerance of California Blue and its symptoms everywhere, from Holland to Sri Lanka to the USA. And if you don’t believe me that elected – infected – officials who invested in the narrative are untrustworthy and beyond mad, just look at what California Blue’s patient zero, Nancy Pelosi, got up to this past week.