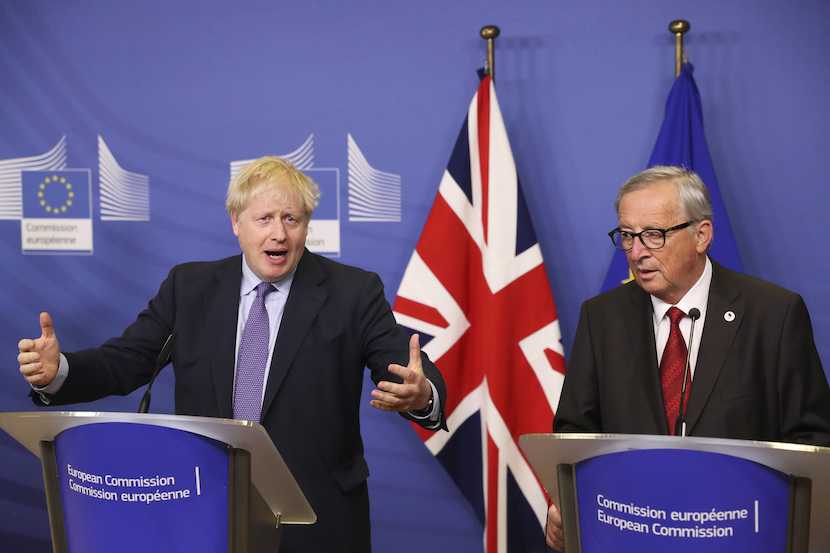 It is difficult for any country trying to deal with a block like the European Union and in the case of Brexit it does not help that the British government is saying; we want to get out of the EU but we want all those nice privileges of trading as an EU-member. And when you finally get a half-arsed deal like the one former Prime Minister Theresa May put on the table; it is kicked into touch by the House of Commons. In gallops a rather scruffy looking new Prime Minister in the form of posh boy Boris Johnson saying; “leave it to me. I will whip the EU into shape by threatening that I will walk away and crash out of the EU and let’s see who suffers the most”. The German carmakers, French cheesemakers and every other European who uses the lucrative British market, or the Brits who like to keep their dominance as the financial capital of Europe. Well, last night it appeared that Johnson had actually done a deal but… this morning Northern Ireland’s Democratic Unionist Party whose backing Johnson needs, poured cold water on the deal at the very last minute as a weary EU was just about to sit down and discuss it. He is going to need more than blustering threats, the Johnson charm and Irish luck to pull this off. And even if he can persuade the DUP back to his side, he faces the House of Commons, the very place where Theresa May came undone. And in all the uncertainty, the pound is yo-yoing up and down like a developing country currency. It improved to a seven month high against other major currencies on the back of the news that a deal is imminent. The Rand also benefitted trading below R19 for a pound and at R14.78 to the dollar earlier this morning. – Linda van Tilburg

(Bloomberg) – Negotiators from the UK reached an agreement with officials in Brussels Thursday that could pave the way for Britain to finally break 46 years of ties with the European Union. But the Democratic Unionist Party said it still can’t support the deal.That makes the parliamentary arithmetic a lot tighter for British Prime Minister Boris Johnson, who needs the backing of the House of Commons in a vote expected Saturday in order to deliver an orderly Brexit on October 31.Three DUP officials said their party won’t support the deal, saying they were unhappy about customs checks in the Irish Sea, among other things. Johnson’s been defeated in a string of crucial votes since taking office in July and lost his majority in the chamber. Nevertheless, the prime minister announced the agreement with an upbeat statement.

Without his Northern Irish allies, Johnson needs to pick up roughly 61 votes from a pool of just 75 available deputies – that will involve persuading hold-outs in his own party to side with him rather than the DUP. It’s the final, treacherous hurdle for the UK leader to clear before he can complete his ambition of leading Britain out of the EU.

We’ve got a great new deal that takes back control — now Parliament should get Brexit done on Saturday so we can move on to other priorities like the cost of living, the NHS, violent crime and our environment #GetBrexitDone #TakeBackControl

The withdrawal agreement was completed just in time for EU leaders to assess it when they meet later today in the Belgian capital. European Commission President Jean-Claude Juncker hailed it as “fair and balanced.”Pull it off, and Johnson will draw a line under three years of political turmoil since the UK voted to leave the world’s biggest trading bloc. That journey has strained its relationship with historic allies, soured the political debate at home, and tested the patience of voters.

Negotiators in Brussels and London this week have gone from optimism to dismay and back again, with the pound twitching at every murmur. It rallied on news of the deal, touching $1.2990 before paring gains.

In a revised political declaration, the two sides pledged to:

Now, the many predictions about the costs or benefits of Brexit may be put to the test. At the very least, businesses and travellers may be spared the inevitable disruption that would have been triggered by Britain crashing out without a deal. For both sides, the agreement is a chance to move their political agendas on and to start focusing on their future trading relationship.

EU chief Brexit negotiator Michel Barnier told reporters in Brussels that he believes the deal can be ratified by the end of October. He called it a “fair and reasonable basis for an orderly withdrawal” by the UK.

In a nod to the painful wrangling of the past three years, he also compared getting the deal done to climbing a mountain.

Labour leader Jeremy Corbyn called for a second referendum, saying in Brussels that Johnson’s deal – which he described as a “sell-out” – was worse than that put forward by predecessor Theresa May.

Most importantly Johnson, who became the face of Brexit during the 2016 referendum campaign, needs to convince the DUP he is not selling them out and to persuade Brexit true-believers that this is a real separation rather than a pointless fudge.

Certainly, die-hard Brexiteers are sounding like they could hold their noses and let Johnson’s deal fly.

“The deal sounds like it could well be tolerable,” said Steve Baker, who leads that faction in Parliament.