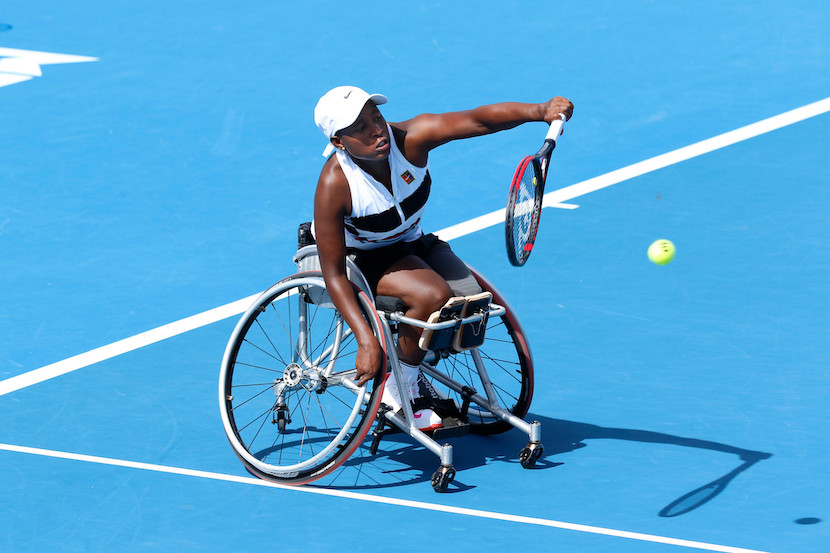 A South African wheelchair tennis ace has made history at Wimbledon this year, when she made the finals the singles and doubles championships. She is Kgothatso (also known as KG Montjane), who has been praised in all quarters – including some of the old legends in tennis – for becoming the first black South African woman to reach the finals at Wimbledon. In the singles, she was beaten by Dutch tennis player, Diede de Groot. Montjane told BizNews about her epic run at Wimbledon, her next challenge (the Paralympics in Tokyo) and how she wants to change the narrative around funding for Paralympic athletes. We caught up with KG shortly after the match. – Linda van Tilburg

It was an amazing experience. It was just a moment for me to indulge and enjoy the experience. I’ve come way too far with my struggles and believing that one day I would win.

Every time I come to play in this tournament, something special always happens. Every time I come here, I’m not setting any goals. I’m just [there to] experience the culture and excitement of the tournament. People out here love [tennis]. They come to watch – whether they know or not. That’s something special. It makes you look forward to this tournament. I can just tell that people out here love tennis. It just warms my heart to see a lot of people coming out to support the sport. It’s amazing and it’s so courageous.

On receiving messages from Cyril Ramaphosa and Billie Jean King:

On the physical demands of having two back-to-back finals:

It was quite tough, to be honest. Considering that I played Thursday, Friday and then the double. Then I had to play the finals with not enough time to recover in between. It’s tough. I’ve never done anything like that before. I just have to hang in there and live the moment of the finals.

On where her love for tennis comes from:

I grew to love the sport as time went by. I couldn’t love something that I didn’t know existed. Given the opportunity to travel and come across the challenges within the sport itself – it’s a tough place to play. That’s where the love developed, I really needed to figure this thing out. There’s really nothing to figure out because it changes every time. That’s what I love about tennis. It’s just kept me going and loving it.