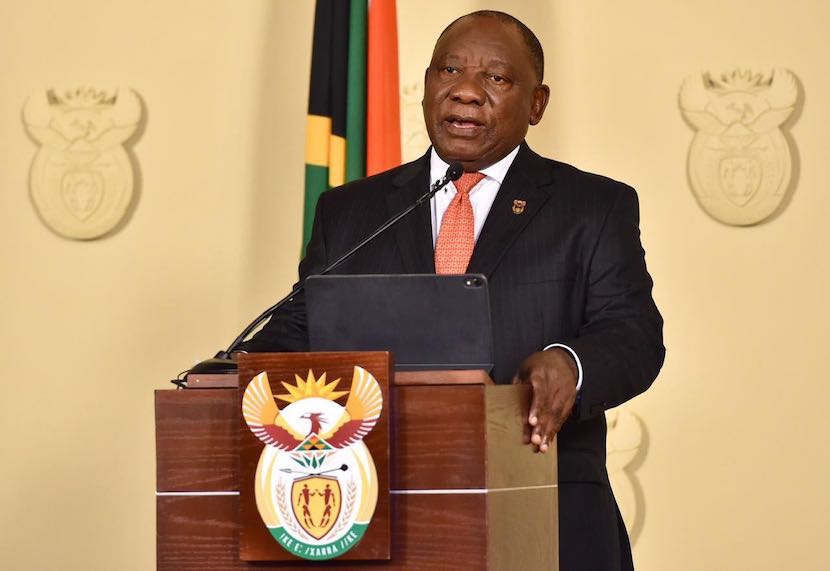 In episode two of our daily podcast on the Covid-19 pandemic, we examine where South Africa is in the cycle in the wake of President Cyril Ramaphosa’s announcement of a three week lockdown where citizens are being confined to their home barracks until April 16. Also in this episode, a view from investment professionals that the war will be relatively short, perhaps only 90 days; more good news from the Asian front where the battle is clearly being won; and an on the ground report from our colleague in London. For more information on Covid-19 click here. – Alec Hogg

It’s a warm welcome to Noluthando Nematswerani, the head of the Centre for Clinical Excellence at Discovery Knowledge. Can you give us an update on the infections in South Africa. What’s the latest number you’ve heard?

The latest I have here is 402 cases right now. We are aware that there is a testing backlog and we could be seeing more in the next coming days as the tests are pulled.

That’s almost double where we were yesterday?

Can you explain the exponential growth that we’ve seen in the last few days?

With the bulk of the cases there is still some travel history, but we are also seeing local transmission right now. People who have come back home, have experienced symptoms, they have met testing criteria and are testing positive. The worrying trend is that we are also seeing people with no travel history testing positive which talks to the issue of local transmission.

Why is it worrying?

Once you have local transmission, it means you can no longer rely on travel history. We are going to have a person to person transmission community spread which could be quite devastating if we do not follow strict preventive measures to try to curb this. Countries that started the way we have, where they did not implement strict and stringent criteria upfront ended up overwhelmed with a widespread community to community infections.

So how well is South Africa prepared?

We are as prepared as we can be. The Department of Health and the National Institute for Communicable Diseases have been working hard and for quite some time to prepare, but we also understand that our healthcare system, with whatever preparedness measures we can put in place, is still a very fragile system. If we have high volumes of patients that require some form of hospitalisation or even intensive care our system will not be able to cope. Taking lessons from developed countries like Italy where they probably have better infrastructure and resources than us and are not coping with the volumes of cases that they are seeing. The worrying trend that once we get to very high numbers of patients who may require hospitalisation and intensive care, our system will not be able to cope.

Roughly how many people who are infected with the virus will need hospitalisation?

We have limited ICU beds, if we do get into a situation where 20% contributes to high volumes of patients, it may become difficult. If you look at Italy for example they have to decide which patients they let go and which patients they treat. It’s a very difficult situation to find yourself in as a health professional or as a government, to decide which citizens will get care and which will not.

It is incredibly serious.What can the government do to react against this?

I think by learning from other countries that have managed to curb the spread. I think South Africa needs to seriously think about flattening the curve. It’s important for us to take learnings from countries that delayed responding. We need to think carefully about how we prevent widespread community infections. How do we prevent from experiencing what Italy is experiencing now? By taking lessons from other countries like Singapore and South Korea and combining those lessons and adapting them for our setting and making sure that we do not overwhelm our system with infections.

Now we know that the president is in touch with the top scientists in China. We know that the information flow to South Africa is probably as good as anyone in the world but is more needed to be done now to stop further infections and if so what?

We are waiting patiently for the president’s statement later today to see how we can strengthen the response that South Africa has already announced about a week or so ago. The worry is that the general public does not understand the gravity of the situation. People are still continuing as if nothing is going on. We talk about social distancing and people are joking about what it means where in actual fact this is one of the most important interventions that we can implement right now to flattening of the curb.

One person who is infected can infect about 2.5 people. It is important to minimise contact with people who are infected and make sure those who are infected are properly isolated in their home environment if they are not hospitalised. People are really not taking it seriously, and the spread is going to continue. If we don’t implement social distancing and principles early on we may sit in a very different position and considering other issues that South Africa has in terms of other infections that are already prevalent in our setting this may be quite devastating if the government does not enforce more stringent measures going forward. There’s been talk in the past few days around a shut down or a lockdown, which other countries have implemented, maybe this is the time for us to consider it as a country as well.

How will you know if you have Covid-19?

The bulk of the people would have travelled. The most important symptom is fever. Some patients have a sore throat, dry cough and some with shortness of breath, which is the chest symptoms.

Those are the common symptoms but are not limited to. There are other people who present it differently. With the constellation of symptoms over time we are going to understand as more and more people get infected and start reporting symptoms. Internationally, we see data keeps changing and we are seeing new evidence of other symptoms that positive patients are reporting.

How long does it last?

It is quite interesting in the sense that from infection to the onset of symptoms most people will be asymptomatic until maybe day five to seven. By that time the virus has been in the body it has been multiplying before you become symptomatic. The onset of symptoms varies from person to person and depending on the severity of the disease. People with mild symptoms may be cleared of infection in a week or two. However, patients may be asymptomatic and continue to test positive, meaning that they still have some form of viral shedding. There is still a lot that we do not know. We were talking about 14 days. Now we think it is 21 days. As we start to see more and more patients and understand the data we will revise and have a better understanding of the duration of illness and with this particular virus.

So, it’s still too unknown now to be able to say to someone who does get sick, that it’s three weeks after you’ve been feeling these symptoms that you can go back to work?

We cannot go with the time frame because there’s still too much that we do not know. We are guided. For now when people are symptomatic and they are confirmed to have the disease most of them in fact, all of them, have to have two negative results before being cleared. Some patients who have tested positive and had symptoms are now asymptomatic but they are still testing positive. We still are going to learn a lot and and we can then, based on that understanding then we may have better recommendations going forward. Right now it is about collecting the data and interviewing some of these patients to understand the disease process better.

Is there any update on immunisation or vaccines?

When I talk about vaccines I always emphasise the fact that vaccine development is very complex. If you look at vaccine development in general it takes many years. The reason for that is that you will do the testing in the lab and then you will do animal studies which were called preclinical studies. Once it has passed those phases then you do human trials. Human trials are going to take a few months before you will have a commercially available vaccine. Remember that the human trials must show that the vaccine is safe and it is efficacious. We have been given a timeline of about 12 to 18 months based on a fast track process. In the meantime there’s a lot of work being done in terms of testing treatments that can help patients to recover better. There have been a lot of various drugs that have been tried and promising results have been reported, but there are no confirmed or approved treatments right now. Everything is still in trial phase. We really emphasise the preventative measures, social distancing being one of the most important at this point.

For South Africans apart from social distancing how can they protect themselves perhaps through building their own immunity? Are there any, is there any advice you can give us there?

It’s the advice that we always give. Yes we’re talking Covid-19 now but we’re going to be getting into the flu season, so exercise and good nutrition. Diet rich in fruits and vegetables for your vitamin supply, and hydration. Good sleep is good for your immune system as well. All the basic wellness messages that we’ve been advocating for even before or Covid-19 hit.

Just to close off with, there was a trading statement today from Famous Brands, they have operations in the UK and in South Africa. They said that in the UK they saw the virus really hitting them on the 1st of March, and in South Africa the 16th of March. Is that about right from your experience that South Africa appears to be about two weeks behind countries like Britain?

Yes, I think I mean there’s been quite a lot of speculations around why we were not hit as early as others. The spread of the disease has been in the northern hemisphere countries with some of the Southern Hemisphere countries being affected. As we get more data we will soon understand the patterns of spread whether there’s seasonality involved and whether there are other factors that may have influenced the delays in us seeing this infection. It is very important to not ignore the lessons from other countries as we fight Covid-19 going forward. You can see we’re going to be overwhelmed with a number of cases and something drastic needs to happen for us to prevent further spread.

That’s Dr. Noluthando Nematswerani, the head of the Centre for Clinical Excellence at Discovery.