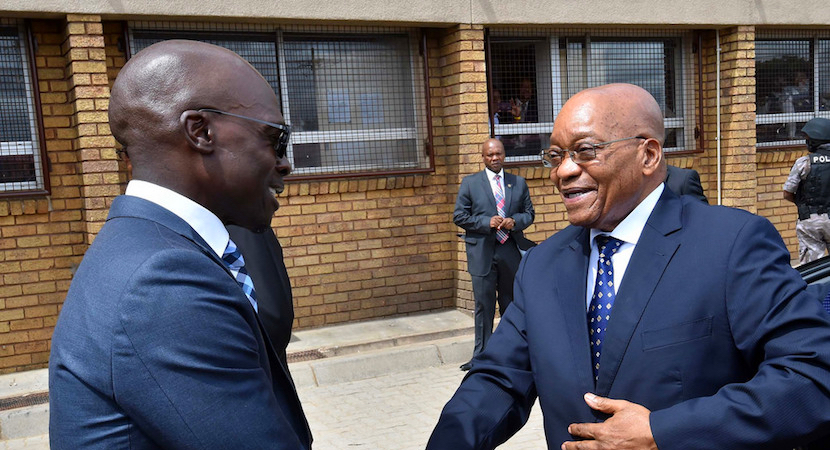 South Africa’s new Finance Minister Malusi Gigaba is doomed from the start. This is because he is inevitably associated with the state capture strategy being carried out by President Jacob Zuma, while his friends the Gupta brothers stand in the wings. Gigaba lacks the credentials to run a country’s finance ministry at a time when it is on the brink of economic crisis. He is singularly underwhelming. As Bloomberg notes, Gigaba is a rookie when it comes to finance and business. As a minister, he has a poor track record, presiding over state enterprises at a time when Eskom incompetence plunged the country into ongoing black-outs. Gigaba was also in charge when poorly thought-out Visa policies were introduced with a destructive impact on tourism. Will Malusi Gigaba be a ‘weekend special’ like Des van Rooyen, the last Zuptoid that Zuma attempted to instal as Finance Minister? South Africans will be praying that this political madness is short-lived, as the shock cabinet reshuffle shows every sign of pushing South Africa into a financial crisis and terminal decline. International investors are bracing for extreme rand volatility and multiple ratings downgrades. – Jackie Cameron

That’s a tough task for the 45-year-old, who trained as a teacher and is a rookie when it comes to finance and business.

Gigaba has been at the forefront of South African politics for more than two decades, serving as head of the ruling African National Congress’s youth wing, a party lawmaker and minister of public enterprises and then home affairs. He succeeds Pravin Gordhan, a favorite of investors who was dumped after months of sparring with President Jacob Zuma for control of the Treasury.

Gigaba has got off to a rocky start. The rand weakened early on Friday following news of his appointment and civil-rights activists and a labor-union group have threatened to occupy the Treasury to prevent it falling into the hands of Zuma and his allies. The reaction to his appointment has been overwhelmingly negative.

“The market will struggle to digest Gigaba,” said Peter Attard Montalto, an economist at Nomura International Plc in London. He has “clearly been put in a role to do a particular job by Zuma and viewed as loyal to Zuma.”

The rand depreciated 1.7 percent to 13.4942 per dollar by 7:28 a.m. Friday, extending the decline this week to 8 percent, the worst performance among more than 140 currencies tracked by Bloomberg.

Phoenix Kalen, director of emerging-market strategy at SocGen in London, described Gigaba as lacking in prior experience on financial markets or economics, while Eurasia’s Africa director Darias Jonker said his reputation was tainted by his poor management of state-owned enterprises and immigration policy.

The son of an Anglican priest and a nurse, Gigaba was born in Eshowe in the eastern KwaZulu-Natal province. He obtained a bachelor’s degree in education from the University of Durban-Westville in 1991, and a master’s degree in social policy three years later.

While a student, he joined the ANC and won the presidency of the party’s Youth League in 1996, two years after the ANC took power following the post-apartheid elections. He was reelected in 1998 and 2001. At the age of 28, Gigaba was elected in 1999 to Parliament, where he served until 2001 before resigning. He was reappointed a lawmaker after a vote in 2004 and then-President Thabo Mbeki named him deputy home affairs minister.

In 2007, he was found to have billed 1,020 rand ($76) to his government credit card to buy flowers for his wife. He described the spending as an “administrative” error and repaid the money.

When Zuma wrested control of the ANC from Mbeki in 2007 and claimed the national presidency two years later, many Mbeki allies were ousted from key posts. Gigaba survived the transition and was named public enterprises minister in November 2010, giving him political oversight over eight state-owned companies. They included power utility Eskom Holdings SOC Ltd., which drew criticism for implementing managed blackouts because it couldn’t generate enough electricity to meet demand.

After Zuma won a second term in 2014, he named Gigaba as minister for home affairs. His record there was blighted by the implementation of new immigration rules, which were aimed at boosting security but ended up deterring tourists.

Despite having government experience Gigaba is “unlikely to lead the Treasury as effectively as Gordhan,” Jonker said. “He is also likely to be more antagonistic towards the concerns of international investors, especially Western investors.”