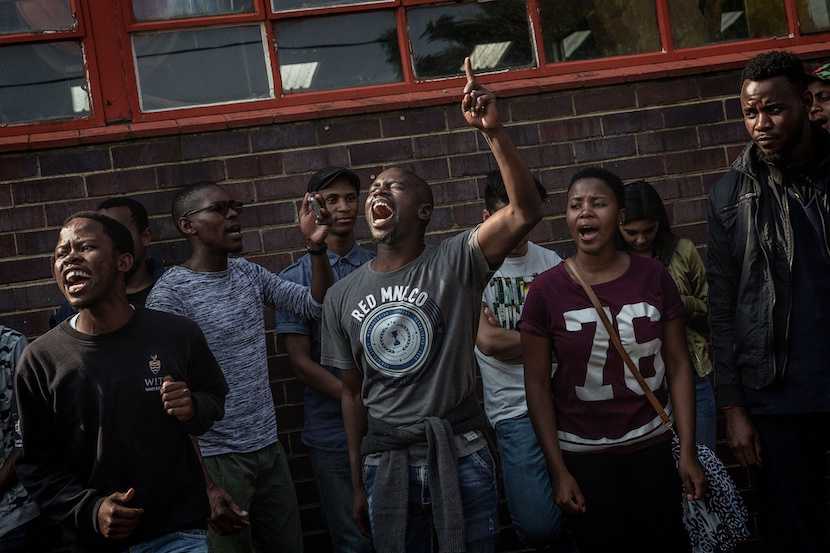 LONDON — It is estimated that 4.5m eligible voters have not registered to vote in next week’s election and a significant proportion of that are young people, which begs the question: Why don’t they want to participate in the democratic process that their parents and grandparents have fought so hard for? It is easy to dismiss it as a typical millennial phenomenon, that they are so self-absorbed and looking at their phones so often that they can’t be bothered to engage with the world. This may be true of some of the youth voters, but conversations on social media about the youth vote in South Africa appears to point to another reason; young voters feel that it would not make any difference to the politics of the country if they vote. And it is not that they are not politically active. They have plenty to say on current issues and have been very vocal and active during the #FeesMustFall campaign. Some of the social media comments also highlight that voting registration and the polling process may also be too complicated and inflexible to accommodate young voters. The disengagement of young voters is an issue that needs to be addressed by political parties and the Independent Electoral Commission. A robust democracy cannot be sustained without young voters, especially in Africa the only region in the world where the number of people under-24 is increasing. – Linda van Tilburg

(Bloomberg) – Young South Africans are turning their backs on elective politics at the fastest pace in at least two decades, a trend that may hurt the ruling party in next week’s vote.

The number of South Africans under 20 who have registered to participate in the May 8 general election has dropped to the lowest level since at least 1999, data from the Independent Electoral Commission show. It didn’t have details for the first non-racial elections in 1994. Among citizens aged 18 to 29 – the biggest segment of the voting population – registrations are at the lowest in at least a decade. 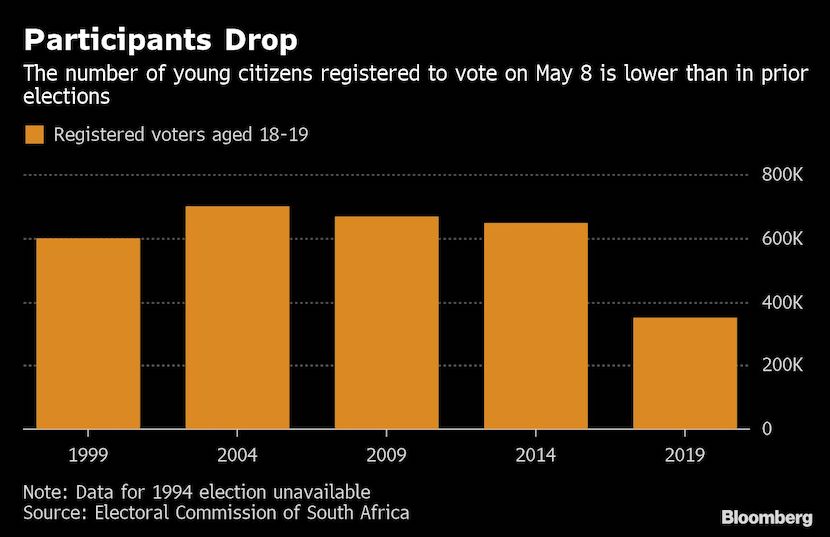 The move may damage the governing African National Congress, whose leaders have been named in a string of corruption scandals and have presided over a jobless rate that has persisted at a 15-year high of 27%. This could also limit the benefits for the Economic Freedom Fighters, formed by expelled ANC youth leader Julius Malema in 2014, which is counting on support from young black South Africans with populist policies such as expropriating land without payment.

“There is an element of voter apathy and not political apathy – in universities, you see robust and noisy politics which is usually powerful enough to effect change,” said Mpumelelo Mkhabela, an independent political analyst. “The EFF has helped to energise young people. A lot of people on campuses vote for the EFF. The ANC Youth League has been disorganised.”

Protests have worked well for students. Sometimes-violent demonstrations in 2015 and 2016 forced the government to promise free tertiary education for children from poor families, straining an already tight national budget. A new round this year over student accommodation, food, registration fees and problems with financial-aid administration saw campuses closed nationwide in February and March.

More than half of South Africans aged 15 to 24 seeking work are unemployed, with the rate vying with Bosnia and Herzegovina and neighbouring Eswatini’s to be the world’s worst, World Bank data show.

While President Cyril Ramaphosa has pledged reforms to boost a sluggish economy, the government – led by the ANC since 1994 – has fallen short in addressing disgruntlement in many poor communities over a lack of electricity, water, houses and jobs. South Africa remains one of the most world’s unequal nations.

For Lindelwa Nhlebela, 21, a third-year engineering student at the University of Witwatersrand in Johannesburg who hasn’t registered to vote, parties tailor their manifestos to entice voters, but don’t deliver on them.

Ramaphosa replaced Jacob Zuma as ANC president in December 2017, narrowly winning the contest with Zuma’s ex-wife. He has pledged to end corruption, but among the ruling party’s parliamentary candidates are people accused of graft.

“Exposure of corruption has become detrimental towards parties because youngsters start to think ‘What is the use in voting if they’re going to be given a mandate and just go with it’,” said Dirk Kotze, a political-science professor at the University of South Africa.

The ANC, which polls suggest will keep its majority in the May ballot, is promising youth internships and removing work experience as a requirement for employment of young people in the public sector.

The EFF plans to make it compulsory for women and youth to control half the board and management of companies with insurance licenses, according to its manifesto. Black people enrolled in doctoral-study programs will receive R1m each, it said.

Also read: Malema looking for hung Parliament in May elections

The Democratic Alliance, currently the biggest opposition party, would provide access to a national civilian-service program that would give young school leavers an opportunity to receive industry training in the fields of their choice.

Martin Coetzee, 19, a dramatic-arts student at the University of the Witwatersrand, didn’t get around to registering.