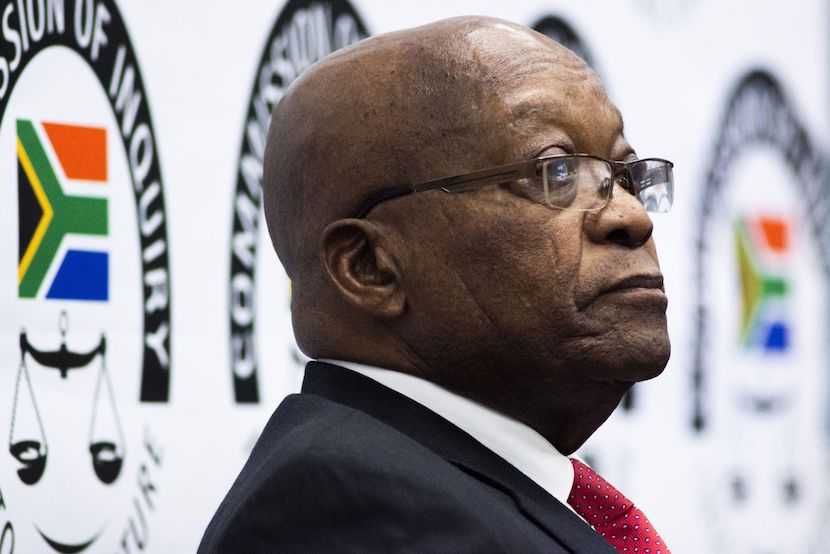 With over 130 days of testimony and more than 80 people having appeared at the Zondo Commission, it’s now time for the star witness. Former South African President Jacob Zuma, who has found himself at the centre of the allegations, finally took to the stand earlier today. And our friends at Bloomberg have put together a highlights reel of what’s been happening. It makes for interesting reading for those who haven’t been watching in. The story will be updated as new information filters through. – Stuart Lowman

(Bloomberg) – Former South African President Jacob Zuma is appearing before a judicial panel for the first time to answer accusations that he consented to and benefited from widespread looting during his nine-year rule.

Lawyers for the commission of inquiry will question Zuma, 77, about claims by previous witnesses that he allowed members of the Gupta family, who were his friends, to influence his administration’s appointments and to flout government rules to further their business interests. Ex-Finance Minister Pravin Gordhan estimates that more than 100 billion rand ($7.2 billion) may have been looted during Zuma’s rule.

Here are the latest developments, updated throughout the day. (Time-stamps are local time in Johannesburg.)

Proceedings have adjourned for the day. Zuma will resume his testimony at 10am tomorrow.

Zuma testified that he couldn’t remember having called Themba Maseko, the former head of the government communications service, to ask him to call the Gupta family.

Since the Guptas were starting a new newspaper, they would want to speak to Maseko and there was nothing extraordinary about them meeting, the ex-president said. Zuma testified he knew nothing about the discussions Maseko had with the Guptas about the government’s R600m ($43m) advertising budget.

Ngoako Ramatlhodi, who served as mines minister from 2014 to 2015, rejected Zuma’s allegations that he was a spy for the apartheid regime and challenged him to take a lie detector test. Ramatlhodi said by email that he stood by the evidence that he made to the commission last year.

Zuma has concluded his opening statement and the commission’s lawyers are questioning him about allegations made by the former head of the government communications service.

Themba Maseko testified in August last year that the former president phoned him in 2010 and told him to assist members of the Gupta family, who were starting a media company. Ajay Gupta then demanded that Maseko’s office allocate the state’s R600m ($43m) advertising budget to the family’s newspaper and television channel, Maseko said.

Zuma, the ruling party’s former head of intelligence, said he’s been provoked to such an extent that he would now expose those who had sought to discredit him. He identified Ngoako Ramatlhodi, who served as his mines minister from 2014 to 2015, as a spy for the apartheid regime and said he had been recruited while he was a student in neighbouring Lesotho.

Ramatlhodi testified in November that members of the Gupta family exerted an inexplicable influence over Zuma and exploited their relationship with him and his son, Duduzane, to further their business interests.

Zuma denied that his relationship with the Gupta family was corrupt, or that they influenced any of the political appointments he made. The ex-president confirmed that he asked the family to help set up a newspaper — the now defunct New Age — to change the “negative” narrative in the country.

“I have never done anything with them unlawfully or whatever, they just remained friends,” Zuma said. “I have wondered why I am accused, why people think my relationship with them is not right when they had relationships with other people,” he said, adding that the Guptas were also acquainted with former presidents Nelson Mandela and Thabo Mbeki.

Zuma has spent more than an hour talking about a perceived campaign to discredit him. He said unfounded allegations include that he sought bribes from arms dealers who sought state contracts in the 1990s, and findings by the nation’s anti-graft ombudsman that he illicitly benefited from a taxpayer-funded upgrade to his private home.

Zuma also said there had only been some instances of corruption during his rule, and criticised the fact that he had been forced to set up the judicial panel to investigate the allegations.

“This commission, according to those who are implementing things, must be the grave of Zuma,“ he said. “He must be buried here.”

“I have been the subject of talk in this country, for more than a decade I have been vilified, alleged to be the king of corrupt people and the most corrupt,” Zuma says in his opening remarks to the commission. “This commission from my understanding was really created to have me coming here and perhaps to find things on me.”

Zuma’s lawyer, Muzi Sikhakhane, said he had reservations about the ex-president appearing before the commission, complaining that his client hasn’t been given sufficient opportunity to prepare for questions he may face.

“We believe that had we been given an opportunity to prepare Mr. Zuma, to advise him about people’s names that he may mention, that he can’t do so without those people being given notice, this process today would be much better.”

Zuma arrived at the hearing to the sounds of cheering and applause in the public gallery.

There’s a heavy security presence in and around the building in northern Johannesburg where the inquiry is being held. Zuma’s hearing is scheduled to begin at 10 a.m. The former president appeared in high spirits on Sunday, when he posted a short video of himself on Twitter:

I thought I should brighten up your day pic.twitter.com/T9kJgBUZz8

Police have erected barricades around the perimeter of the building where the inquiry is being heard in anticipation of the arrival of hundreds of Zuma’s supporters, who object to his appearance before the commission.

#StateCaptureInquiry It's getting busier here in Parktown where the state capture inquiry takes places. Police cars, media and members of the public are making their way inside the venue where former President Jacob Zuma is set to appear. LM pic.twitter.com/SGwNXvaF1L