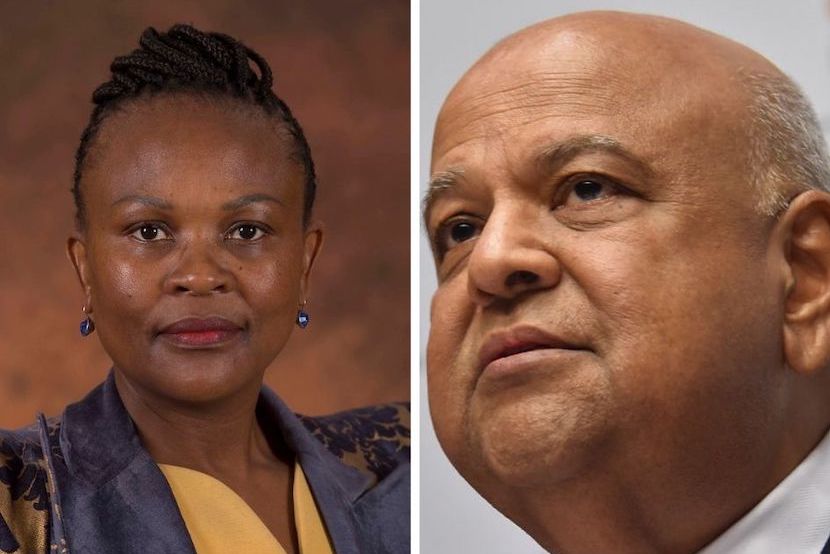 The longer Public Protector Busisiwe Mkhwebane keeps firing her legal pump-action shotgun, the less convincing and damaging it seems to get. The latest legal jamming of her rapid-fire scattergun comes in the form of a far-reaching judgement on a ‘vexatious’ application by a tobacco manufacturer who used the by-now thoroughly discredited ‘rogue tax unit’ narrative to try and render a supplementary SARS claims against him invalid. He was spectacularly unsuccessful, even though he managed to drag matters out for a long time. Where Mkhwebane’s guns may well be spiked is that the court’s findings are binding on impending cases and under-gird the Nugent Commission conclusions which she so doggedly tries to discredit in her pursuit of former SARS boss, Pravin Gordhan. Judge Meyer dismissed outright businessman Martin Wingate-Pearse’s evidence-starved contention that he was a victim of the SARS covert intelligence unit and that it infringed on his constitutionally protected rights, Instead Judge Meyer asserts, the litigation was undertaken to assert the financial interest of Mr Wingate-Pearse and that the “proceedings are vexatious in effect.” This story gives some clues as to where this leaves Mkhwebane. Where would we be without her? Story courtesy of Daily Maverick. – Chris Bateman

The Nugent Commission into tax administration and governance at SARS has been affirmed as the authority on the revenue service – as well as longstanding allegations of a “rogue unit” in its midst – when Judge Pieter Meyer on Wednesday in the Gauteng High Court ruled against local businessman Martin Wingate-Pearse in a more than decade-old tax squabble.

Judge Meyer relied entirely on the Nugent Commission, saying it “made findings in its final report that support SARS’ stance that Mr Wingate-Pearse’s allegations about the existence of a rogue unit within the ranks of SARS are without a sound factual basis”. (Read the Nugent Commission report here)

The Nugent Commission conducted a four-month investigation in 2018 and published its findings in December of that year. Judge Meyer repeated that the commission’s wide-ranging findings, in a section of its report labelled “The So-called ‘Rogue Unit’ ”, included that:

(Nugent did not investigate the conduct of the unit. Charges against one former member of the unit, Andries Janse van Rensburg, as well as two former managers Johann van Loggerenberg and Ivan Pillay, are being reviewed by the National Director of Public Prosecutions Shamila Batohi in the contentious “Sunday Evenings” case.

Judge Meyer’s ruling is reportable and will be taken into consideration by all other courts considering any similar matter before it. This includes review proceedings against Public Protector Busisiwe Mkhwebane which challenges the rationality of her findings against Minister of Public Enterprises Pravin Gordhan. (Read Mkhwebane’s report here)

Judge Meyer presided over a case brought to court by Wingate-Pearse with its roots in 2002, when SARS started investigating the businessman for income tax evasion.

Wingate-Pearse is a shareholder in Carnilinx, a tobacco manufacturing business managed and partly owned by Johannesburg businessman Adriano Mazzotti. Both Mazzotti and Carnilinx were found to be on the wrong side of local tax laws before. Wingate-Pearse and Mazzotti are business partners and family. Another Carnilinx business associate and director, Kyle Phillips, was EFF President Julius Malema’s benefactor when he paid R1m towards Malema’s tax debt. The R1m was later classified as a “loan”.

Back then, SARS had estimated that Wingate-Pearse “grossly” under-declared taxable income and raised assessments of eventually R9m, revised down from R41.7m. Wingate-Pearse had kept SARS busy in court for the better part of a decade when he again launched an application in August 2015, this time complaining that SARS’ “rogue unit” was behind his tax woes.

He asked the court for a declaratory order finding that the establishment by SARS of the investigating unit, described as “rogue” by its detractors, was without statutory authority, unlawful, inconsistent with the Constitution and invalid, and that the unit abused its power and resources by illegally spying on taxpayers, that he was a victim of this covert intelligence unit and that it infringed on his constitutionally protected rights. Wingate-Pearse struggled to provide any evidence.

Judge Meyer said his allegations cannot be true, because the HRIU unit was only established in 2007 – long after SARS investigated and raised additional tax assessments. Some of Wingate-Pearse’s allegations are also “absurdly wide”, “too generalised” and “vague”. The judge further found Wingate-Pearse “strongly relies” on an affidavit by triple spy and attorney Belinda Walter to support his allegations that SARS “employed illegal intelligence-gathering measures” against him. Walter’s affidavit is, however, high on conspiracy and low on proof. Judge Meyer dismissed the case, as well as an interlocutory application relating to SARS’s additional estimated tax assessments – with costs, while berating Wingate-Pearse for giving SARS the runaround for over a decade.

Judge Meyer came to the stinging conclusion that he is “unable to hold that the litigation was undertaken to assert constitutional rights. It was undertaken rather to assert the financial interest of Mr Wingate-Pearse” and that the “proceedings are vexatious in effect”.

Wingate-Pearse’s allegations contain some of the same allegations Mkhwebane considered in a complaint lodged at her office by EFF deputy president Floyd Shivambu and an anonymous complainant. These complaints, however, inject Pravin Gordhan into the rogue unit question, accusing him of being instrumental in the illegal establishment of the HRIU unit, as well as the recruitment of its members.

Judge Meyer’s judgment and the findings of Mkhwebane are diametrically opposed. Meyer ratified the Nugent report, establishing the commission as the leading authority on SARS and the HRIU unit’s existence.

Mkhwebane, in contradiction, found the establishment of the HRIU unit was unlawful, that the unit contravened national intelligence provisions, that the unit went “rogue” and that Gordhan was involved in the thick of things. Judge Meyer’s judgment does not make any mention of Mkhwebane’s findings on the SARS investigative unit, which was delivered on 5 July 2019.

Gordhan and Pillay’s case will most probably be greatly aided by Judge Meyer’s ratification of the Nugent Commission as the authority on SARS.

Judge Meyer said the Nugent Commission “found that there was an onslaught upon those who managed SARS founded upon allegations once peddled by the Sunday Times to a beguiled public for a year or more, about a ‘rogue’ unit that was alleged to have existed within SARS; the Sunday Times itself withdrew its allegations and apologised some two years later; although the establishment of HRIU was termed unlawful by a panel chaired by advocate Sikhakhane SC, there was nothing in the report to persuade the commission why that was so; and ‘the SARS Advisory Board chaired by Judge Kroon, reported to the Minister, and issued a media statement, saying the unit was unlawful, but in evidence he told the Commission that was not a conclusion reached independently by the Board, but had been adopted from the Sikhakhane panel, and he had come to realise it was wrong. Indeed, he supported the re-establishment of capacity to investigate the illicit trades, which he recommends’. In his testimony before the commission, Judge Kroon said: ‘Yes, as I have said in my report, my first comment was that the statement relating to the unlawfulness of the establishment of the unit were (sic) not thought through properly and were (sic) in fact incorrect’.”

Kroon, in the end, confirmed to the Nugent Commission that he would support the re-establishment of an investigative unit such as the HRIU. DM