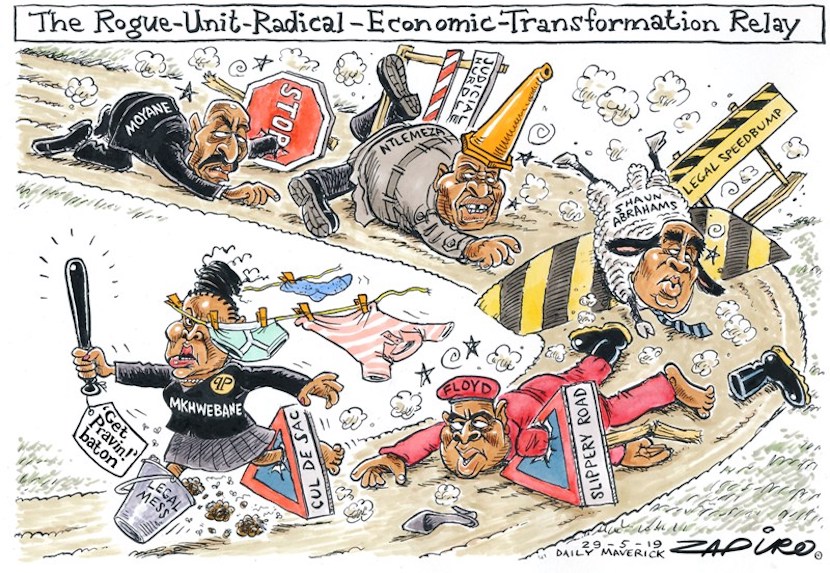 To be a fly on the wall, one could picture a dartboard in the Public Protector’s office with Public Enterprises minister Pravin Gordhan‘s picture on it. The picture would however be untouched but darts would be scattered, given the amount of time the Public Protector’s office is spending on trying to implicate Gordhan. And one can only begin to think that time would be better spent elsewhere. Busisiwe Mkhwebane even took to YouTube, to plead her case, blaming the media for a skewed message, but the facts speak louder than words. As highlighted in the Daily Maverick article below, Rebecca Davis unpacks the four other complaints against Gordhan, and quickly dispels them. But the real firecracker comes in when one looks at the number of cases the Public Protector had to carry through from last year due to lack of funding and capacity. And the more digging Mkhwebane does, the bigger the hole she’s standing in seems to get. Time that could be spent better elsewhere… – Stuart Lowman

Public Protector Busisiwe Mkhwebane feels that she is the victim of a skewed media narrative.

That was clear from a YouTube video released by Mkhwebane’s office on Monday 3 June, in which she expressed her desire to “communicate to the South African public what has been happening with our investigation into the Minister of Public Enterprises”.

The catalyst for this unusual step was the recent release of the Public Protector report which found Minister Pravin Gordhan guilty of misconduct over the granting of a retirement package to former deputy SARS commissioner Ivan Pillay in October 2010. In the aftermath of that report, says Mkhwebane, there has been a “serious attack against the person of the Public Protector” — mobilised, she implies, by South African media.

“I don’t own any form of media,” Mkhwebane tells the camera in her video. “So this is my opportunity to communicate to whoever will listen…”

What Mkhwebane wishes to communicate is the message that she is not just standing by her Gordhan report, but widening her scope to encompass four other complaints against the Public Enterprises Minister.

As such, Mkhwebane said she had issued Gordhan with a Section 7(9) notice in terms of the Public Protector Act, which gives a person implicated in a Public Protector investigation the right of response.

The fact that there are four other complaints against Gordhan, Mkhwebane said, means that “there’s still a number of interactions we will have with Minister Gordhan”.

Mkhwebane indicated that the other Gordhan-linked complaints currently before the Public Protector include the following.

Potential tender irregularity relating to the SARS purchase of IT company Interfront:

This complaint relates to the SARS Modernisation and Technology Programme, implemented between 2007 and 2014 by the revenue collector to adopt new IT systems. Gordhan was SARS commissioner between 1999 and 2009.

In 2016, audit firm Grant Thornton was appointed to probe the programme, which involved the purchase of state-owned software firm Interfront. The Grant Thornton investigation was known within SARS as “Project Lion”, and was believed to be part of then-SARS commissioner Tom Moyane’s attempt to dig up dirt on Gordhan and other SARS officials.

Grant Thornton is understood to have found no evidence of wrongdoing in the relevant contracts in the firm’s R12.5m initial investigation. Seemingly dissatisfied with this finding, Moyane then approached Treasury for an additional R50m to expand the probe, which Treasury refused. That did not stop Moyane halting the modernisation project three months after he took office and bringing in IT consultancy Gartner, which was awarded an illegal R200m contract for work that did not end up being implemented.

It was also now-disgraced Moyane who asked the Hawks to investigate the existence of an alleged spying unit within SARS, which became known as the “Rogue Unit” in a series of Sunday Times articles in 2014 and 2015.

Since then, there has been a veritable avalanche of people and entities distancing themselves from the narrative of the Rogue Unit’s existence.

Former SARS advisory board head Judge Frank Kroon, who led the panel which declared the SARS unit unlawful, told the Nugent Commission in 2018 that the panel was wrong and had relied on unreliable information — one element of which was a KPMG report which has since been withdrawn. The Sunday Times has retracted and apologised for its reporting on the Rogue Unit.

The Hawks’ attempts to bring a criminal case against Gordhan over the Rogue Unit similarly had to be scrapped due to lack of evidence.

The Rogue Unit narrative has thus been investigated by, at a conservative estimate, five different bodies – lawyer Muzi Sikhakhane on behalf of SARS, Kroon and his advisory board, the Sunday Times, KPMG and the Hawks. Sikhakhane’s report has been dismissed by independent legal experts as making no sense; Kroon, the Sunday Times and KPMG have retracted or disavowed their findings; and the Hawks have failed to build a case.

Yet despite this, Mkhwebane seems to believe that this issue is still worth expending her office’s limited investigative capacity on once again. In this, she has been aided by the EFF, which has untiringly pushed the matter.

The Integrated Financial Management System at Treasury under Gordhan’s watch:

The implementation of National Treasury’s Integrated Financial Management System (IFMS) has been a monumental and expensive failure, with “basic financial management processes thrown out the door”, to quote Treasury director-general Dondo Mogajane appearing before Parliament in December 2018.

An independent investigation into the IFMS has already been completed by forensic firm Nexus Forensic Services, which produced damning findings – including the irregular awarding of contracts and failures in the supply chain management process – and recommended that action be taken against implicated officials. Since then, Parliament has criticised Treasury for not acting swiftly enough in taking action against implicated officials, which does not include Gordhan.

The Nexus report was the second such investigation to take place, with a first – undertaken by Deloitte – being dismissed after it produced no adverse findings.

It is unclear what aspect of the IFMS case Mkhwebane views worthy of reinvestigating.

The allegation that Gordhan lied to Parliament regarding his interactions with the Gupta family:

This complaint claims that Gordhan knowingly misled Parliament in 2016 in his response to parliamentary questions from opposition parties.

In response to an EFF question on whether Treasury staff members had ever met with the Gupta family, Gordhan’s wrote:

“The National Treasury is not aware of any officials from the level of director-general downwards to have met with persons mentioned in the Parliamentary question during the period from January 2009 and December 31 2015”.

Gordhan responded to a separate DA parliamentary question in 2016 with the assertion that he had “not attended any meeting with the Gupta family or anyone else at their Saxonwold Estate”, but had met one Gupta brother at former president Jacob Zuma’s residence “around 2009/10” to discuss small business finance.

In Gordhan’s testimony to the Zondo commission in November 2018, however, Gordhan stated that a meeting had been held in 2010 between Gordhan, Ajay Gupta and Indian billionaire Anil Ambani which was organised by his then chief of staff Dondo Mogajane, who went on to become Treasury director-general.

In neither of his two parliamentary responses did Gordhan mention the meeting with Ambani and Gupta. This omission, charges the EFF, amounts to a violation of the Executive Ethics Code for which Gordhan has yet to be held accountable.

Gordhan’s defence has been that at the time of submitting his written responses, he “had no recollection of the meeting with Ambani”.

“There will be a lot of questions, there will be allegations that I’m still persecuting minister Gordhan, but I’m doing my work, and I understand that when it comes to the issue of the Rogue Unit people have lost lives. People have been tainted. And I think that it’s still going to happen, but I’m doing my work, and I will be serving that [Section 7 (9)] notice today, [3 June 2019], and I’m ready to receive all the backlash.”

Gordhan has been given 10 days to respond to Mkhwebane’s new questions and his lawyer has indicated that the Public Enterprises Minister intends to comply.

Gordhan’s defenders will see these new investigations as further evidence of a political witch-hunt conducted against him by the Public Protector in close adherence to the EFF’s repeated attempts to topple Gordhan.

Mkhwebane’s defenders, meanwhile, will see in that response further unjust criticism of a public figure simply trying to do her job of holding the executive to account.

But beyond both these reactions, one question which is surely salient is why the office of the Public Protector, which received 18,356 complaints in the 2017/2018 financial year – of which 4,400 had to be carried through to the current 2018/19 financial year due to lack of funding and capacity – would be willing to devote precious time and resources to matters which have in some instances been already investigated at least five times. DM