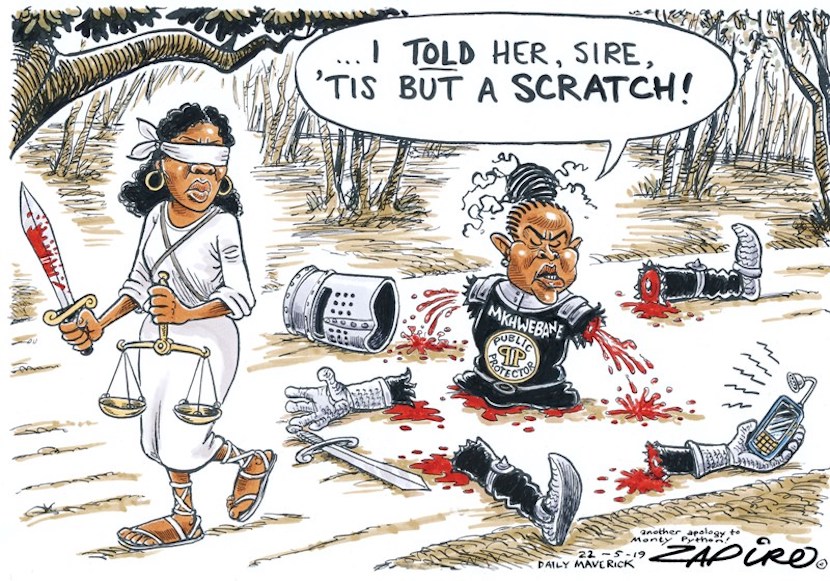 While the court judgements pile up against her, the latest being President Cyril Ramaphosa’s interdict to prevent her ordered censure by him of his Public Enterprises Minister, Pravin Gordhan, Public Protector Busisiwe Mkhwebane, soldiers on, seemingly under political protection. So asserts Paul Hoffman, founder and director of Accountability Now, who believes the ANC-dominated parliamentary portfolio committee should hang its head in shame at failing to probe her apparent 2017 lie over the existence of a report she wrote on the State Security Agency’s alleged maladministration involving apartheid-era malfeasance. The report was made public by an eNCA reporter, yet Mkhwebane remains a wrecking ball, one which curiously swings only in the direction of President Ramaphosa’s reformist faction of the ANC. Hoffman doubts the parliamentary committee will summon sufficient energy to navigate the un-chartered territory of procedures needed to constitute a formal vote of no confidence in her ability to hold office. Meanwhile the courts continue to deliver excoriating judgements against her, the latest describing her legal reasoning as ‘mind-boggling’. Read on to discover Hoffman’s carefully crafted strategy to bring her to book, one that leaves her between a rock and a hard place. – Chris Bateman

The Public Protector is between a rock and a hard place

While the Public Protector is rapidly becoming a full-time litigant in matters involving members of the national cabinet, her office is floundering in a stormy ocean of maladministration, inefficiency and paralysis. Far from protecting the interests of the public, the office appears to have become embroiled, either wittingly or unwittingly, in the factional battles playing out within the governing alliance which consists of the ANC, SACP and COSATU.

Accountability Now has no party political agenda and no involvement in faction-fighting, save to the extent that accountability and responsiveness to the needs of ordinary people are implicated. Promoting these constitutionally enshrined values has been the core business of Accountability Now since day one, back in 2009.

The excesses of the current Public Protector have prompted Accountability Now to take several steps to exact accountability from her, so far without any success of any kind.

It all started back in January 2017 when media inquiries rained in for comment on a preliminary report in respect of the Accountability Now complaint concerning maladministration by the State Security Agency in relation to Ciex uncovering apartheid era malfeasance and the agency’s failure to take any steps to rake back the loot.

The Public Protector gave a written assurance that there was no preliminary report. Karyn Maughan, then with eNCA, made it available, with a covering letter signed by the Public Protector addressed to the President. The Public Protector could not, and still hasn’t, properly explained how she could say there was no report when clearly there was. When asked to explain she cleverly dodged by inviting Accountability Now to complain to the Justice Portfolio Committee of the National Assembly, her oversight body. This step was taken on 16 January 2017 after the Public Protector insisted that she could not investigate herself and declined to answer questions put to her to elucidate her modus operandi and her apparent mendacity.

Since January 2017 parliament has done nothing about the complaint, despite its renewal immediately the sixth parliament took office. Nor has the President exercised his discretion to suspend the Public Protector pending the outcome of a parliamentary process as prescribed by Section 194 of the Constitution. That discretion will now have to be ceded to the Deputy President as the President himself is locked in conflict with the Public Protector on several fronts and can hardly bring an objective mind to bear on the matter. The Justice Portfolio Committee will be considering the fate of the Public Protector on 3 September 2019, but whether Accountability Now’s long outstanding revived complaint will be considered is open to doubt as no response of any kind has been received from the committee to date.

The game changer came on 22 July 2019, when the Constitutional Court lambasted the Public Protector in a judgment awarding punitive costs against her in her personal capacity for the dishonest and incompetent way in which she handled the self-same Ciex complaint, causing a national financial crisis in the process.

Any normal lawyer on the receiving end of the criticisms and adverse findings of the Court would resign, retreat and slip into obscurity. Not so with the Public Protector, she remains defiantly in denial of any wrongdoing and soldiers on regardless of her excoriation by the Court.

At this point it’s safe to say that @PublicProtector has no credibility left- ditto those who find themselves arguing her cause. She is the Zuma of chapter 9 institutions. #Mkhwebane

In these circumstances Accountability Now has taken three further steps to achieve what was sought back in January 2017.

Firstly, a complaint of unprofessional conduct based on the judgment has been laid with the Legal Practice Council. Its disciplinary committee is investigating.

Secondly, a criminal complaint based on the dishonesty, bad faith, and deliberate concealment of uncomfortable facts which were findings of the Court is now under investigation by the Hawks in Pretoria. Their spokesman calls it a fraud complaint, although only perjury and defeating the ends of justice are raised. The investigation will be short and easy. All the Hawks need do is place the relevant affidavits (all filed in the Constitutional Court) and the judgment before the prosecution service for a decision on the charges to pursue.

The Public Protector is on the horns of a dilemma as regards her response to these serious charges which she regards as “frivolous”. If she sincerely contends that she was too inept to form the intention to commit and crime she shoots herself in the foot when her competence to hold office, either as an advocate or as Public Protector, come under scrutiny. If a criminal court finds that it is reasonably possibly true that the Public Protector did not know what she was doing when she deposed to the affidavits so roundly criticised by the Court, she may escape criminal liability, but she will cook her goose as an advocate and as a Public Protector.

Just read the judge’s summation in the #Mkhwebane #PravinGordhan matter. How is it possible that such an ignoramus, so poor at the law and at her job, so malevolent, remains the Public Protector? Her urgent removal should be priority. She is an enabler of State Capture.

It is difficult to predict the order in which the five processes will unfold. The pressure on the presidency to suspend the Public Protector immediately, viewed rationally and reasonably, must by now be overwhelming. The trouble is that internal party politics afford the Public Protector “royal game” status she does not deserve or should no longer enjoy. The parliamentary process is not only in the hands of the ANC majority, it may be temporarily hamstrung by the absence of rules for the process of inquiring into the Public Protector’s fitness for office. Any attempts to proceed relying on the principles of natural justice, perfectly in order though they may be, will probably be litigiously resisted by the Public Protector as a “Stalingrad strategy step” for which she should pay out of her own pocket.

The wheels of criminal justice are not known for their alacrity, but the simplicity of the case may encourage swift movement on the matter both from the Hawks and the prosecutors. Ditto for the Legal Practice Council’s investigation of a possible striking off case.

It will be interesting to see whether the Deputy Public Protector has the spinal fortitude to investigate his boss and to take the “appropriate remedial action” which the law permits him to take. He ought to do so. He could pip all other bodies at the post.

If there is one person who should be charged with disrespecting and undermining the office of the Public Protector, it is advocate Busisiwe Mkhwebane

The best way out of the mess, for the country, the Gogo Dlamini’s, whose complaints are currently left unattended due to so much of the available budget being wasted on fruitless and losing litigation, and indeed for the Public Protector herself, would be a sensible and swift resignation by her. Properly advised, it is what she will do.

Sadly, none of this disastrous saga would have unfolded had proper attention been given to these pertinent passages in the original complaint to parliament in January 2017:

“The previous Public Protector was astute to carefully obtain confidentiality undertakings prior to releasing preliminary or provisional reports and did not, as far as we are aware, use the section 7(9) notice procedure at all or certainly not without first securing confidentiality… It may be that remedial legislation or a better administrative regulatory system should be put in place… A good starting point would be to direct the OPP forthwith to answer the questions we have put to her…”

The parliamentary committee ought to hang its collective head in shame as it is yet to reach the starting point suggested; it is not only the Public Protector who is responsible for the current carnage. Political protection comes at a price. In this case, it is a price the country is ill-able to afford.