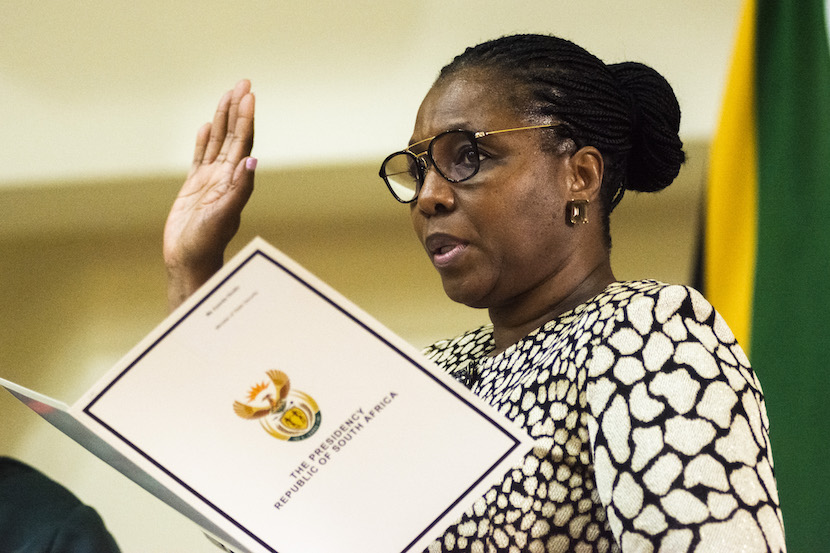 Jacques Pauw’s book, The President’s Keeper, revealed how the State Security Agency acted like gangsters protecting the interests of former President Jacob Zuma. Instead of protecting the country from external and internal threats; it used its powers to secretly siphon off taxpayers’ money to protect a criminal government. The appointment of President Cyril Ramaphosa has not cleaned up the mess that Zuma left behind. The new Minister of State Security, Ayanda Dlodlo, has gone public with how difficult it is to reform the SSA. A recent example of a spy that is not taking his dismissal lying down, is the former head of the SSA’s Special Operations Unit, Thulani ‘Silence’ Dlomo who was regarded as Zuma’s own super spy. He was fired as ambassador in Japan, disappeared for a while and then resurfaced to challenge his dismissal in court. Chuck Stephens from the Desmond Tutu Centre for Leadership writes how nobody has been spared from the probing spies. The centre had been targeted until early this year by burglaries and even his discarded papers were taken by “spies among our staff”. Stephens says Dlodlo and the new brooms may be in place, but they are “not necessarily in charge.” – Linda van Tilburg

In Position, but not in Charge

The Minister of State Security has been lamenting of late – in media interviews – about her difficulties. In City Press, she is quoted by Rapulane Tabane as saying:

“As a government, we need to make hard choices about whether we want a weak or a strong intelligence service. A strong intelligence service does not tolerate the peddling of lies, the distortion of facts, rampant gossip, complete fabrications and rumour-mongering. Otherwise, the organisation will never flourish. If we want to be strong, we must get rid of all these things. We must adopt a zero-tolerance attitude to all these things.”

But trying to reign in the rogue State Security Agency, its Special Operations Unit and its Principle Agent Network, is very difficult. Because the essence of espionage is secrecy, and even the new Minister is being kept in the dark.

We only get shocking glimpses of Stalinesque scenarios. The Auditor General says that R4bn cannot be accounted for. Who knows what tools and out-sourcing to criminal elements would be exposed by some honest transparency?

In Mpumalanga, we had an HOD who according to Al Jazeera had connection with rhino poachers. Suddenly in mid 2014 he was promoted from an HOD straight to Minister of State Security. Parliament is only beginning to find out what was transpiring on this man’s watch.

In his engagement with Parliament, as Minister, he spoke repeatedly of “dangerous NGOs”, giving away a bias that caught up to him in due course. Because when he became Energy Minister in 2016, he was taken on by one of those “dangerous NGOs” for ramming through a Nuclear Deal without proper vetting. He lost in court. The NGO won. No doubt that is why they are dangerous. Because they foul up the unlawful activities of a rogue government.

Let me tell you what this is like on Main Street. That is, for me and the “dangerous NGO” where I work. The media tends to capture the stories of the rich and famous. But this “fiefdom of spooks” has been spying on ordinary citizens as well, trying to interrupt their genuine efforts to expose malpractice. They try to discredit you with a blaze of gaslighting.

Here are some glimpses of our story. In 2012, we formed a Joint Venture with another NGO to bid in a government tender. We won, but within months we were observing corrupt activities, and we confronted our JV partner. It was only then that we realised that they were “non-government” in name only – they were really sycophants. Government was calling the shots and the CWP was another cash-cow that it could milk – like Eskom.

So we were abruptly and unlawfully sidelined. We reported the criminal activity to the Hawks in late 2012 and in 2013 we launched a civil case as well. There was the usual ducking and diving, but then something unusual started happening. We started to suffer break-ins that were clearly data-robberies. Even the police noted that the burglars chose the two Finance computers in one episode, cherry-picked out of a computer network.

Our Hawks investigator was too ambitious – so he was sent on a long training period, then relocated to another province.

Then in mid-2014, the HOD of the very government department that we had confronted was promoted – to Minister of State Security. By late 2014, we were getting burgled regularly. One night they robbed three clumsy desk-tops, leaving 12 training laptops behind. Again the police investigators said that someone was after our data.

There have been burglaries up until March 2019. In one episode, in January 2019, I managed to shoot a burglar in the hall, at 3am in the dark. Guided only by his flashlight. They got away with two laptops, injured, but we had a data back-up in place.

We sensed that there were spies among our staff. For example, I found crumpled papers squirrelled away in storage closets that had once been in my trash bin. Someone was reading the drafts that I threw away. We took Mogoeng Mogoeng at his word, and started to assume that all our messaging is tapped. He himself is being watched, and Fikile Mbalula has also complained of surveillance tracking him.

Then after two years of this “destabilisation”, that Minister of State Security was moved to the Energy portfolio. This was in the midnight Cabinet shuffle that proved to be the former President’s last roll of the dice. The Russians worked hard with this new Minister to try to jam an ill-conceived Nuclear Deal through. At this time, we were lobbying hard for an Energy Mix that would create space for Renewables. In doing so, we were speaking out of turn. Government funding was now drying up – a “scorched earth policy” was applied to us.

Enter stage left – another official from the Premier’s Office who has tried his best to discredit us. It worked at first – but he was like a substitute sent onto the playing field late in the game. Our court cases were ripening. Our civil case finally arrived in the Pretoria High Court in March 2019. We won. The tandem criminal case is moving forward slowly as well. The NPA moves with glacial slowness.

By mid-2018 we could begin to see how Government operates. The SSA is used to silence critics of its policies. It may spy on foreign governments and play defence against their spies in our country? But it certainly spies on citizens, to dig up dirt on them. This is then used for intimidation, blackmail and extortion. If they find no dirt, they invent some – deepfake.

Enter the gangsters from local crime syndicates. There is no clear boundary between the police, the prosecutors, immigration officials and these “mafiosos”. They overlap. It is just more convenient for Government to get criminals to do their dirty work.  Like the “January murders”. No one who reads the news (or a good book like The Al Capones of Mpumalanga) should be surprised when I say this, but the police have harassed me to the point that I have sued the Minister of Police. That one is still in the pipeline. I am optimistic.

Functionally, the bigger the distance is between investigators and prosecutors, the better it is for those being investigated or prosecuted. That is why they closed the Scorpions, who could do both. This separation left a Justice system that is weakened, and intentionally so. So when you have spooks running wild and Premiers with “private militias” (code language for crime syndicates that can be out-sourced), it gets really confusing.

The red lines between cops and robbers, gangsters and spooks are so faded that you can no longer tell the bad guys from the good guys. Worse yet, there is obviously collusion. The police won’t even open a case when a crime has been committed – depending on WHO is reporting it. If you press them to open one, they just refuse to investigate it. Fair play has all but disappeared on Main Street. Good luck to Minister Dlodlo and the new NDPP as they try to re-paint those red lines. They are in position, but not necessarily in charge.