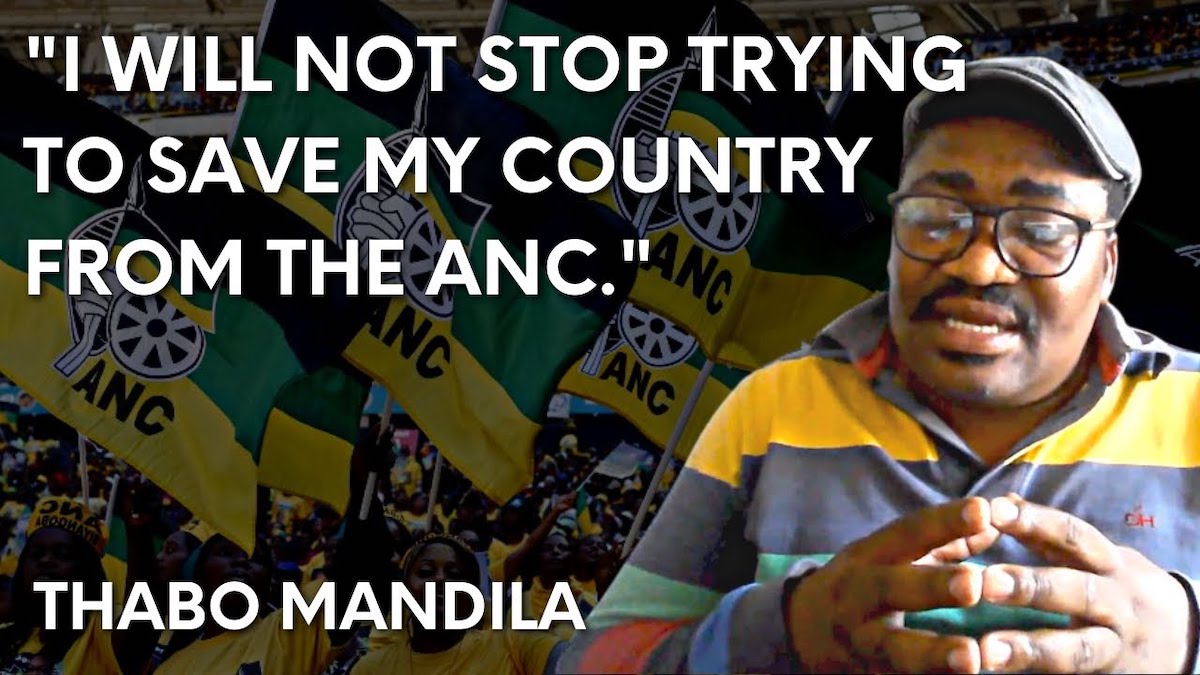 The future of South Africa hangs in the balance, with many pundits believing the ANC is very likely to be relegated below 50% of the vote in 2024. Rewriting that future then comes down to servant leaders who will do everything within their power to boot what Thabo Mandila calls an “evil organisation” from power. Some may call Mandila a political chameleon, by virtue of having been a member of numerous political parties in his time, including the ANC, but he says “my preoccupation is to save my country. I don’t care what people call me. We can’t stop trying to save our country because we are afraid of what people will call us.” Mandila – president of the Republican Democratic Party (RDP) – tells BizNews’ Michael Appel he has been lobbying opposition parties to form a pre-election coalition because no one party can unseat the ANC. This is a straight-shooting interview in which Mandila holds no punches, and certainly no brief, for anyone. – Michael Appel

I’ve had a discussion with Mashaba. Mashaba dismissed me right from the very onset. I understood him. I took a risk when I approached him because I know him. Remember, I’ve got a background in Nafcoc. He’s been a businessman for many years, so I’ve known him, even though he has never known me to understand his character. So I wasn’t shocked when he dismissed me. And I don’t want to dwell much on that.

We had a very interesting discussion with Reverend Meshoe. Reverend Meshoe also dismissed me in a somewhat different way to Mashaba. He didn’t dismiss me in an arrogant way, undermining or, you know, sort of a cocooned manner in which you think you are the man, you think you’re the means to an end. No, he was a very respectful man. He told us that look, he deals with a specific constituency and he wouldn’t want many of these partnerships and coalitions and would contaminate that constituency. Well, in my own assessment, he seems to believe that he’s got sole ownership, so to speak, of the Christian community.

I can tell you where we’ve got a very good audience – with Maimane and Lekota. We also approached Zille. I had some discussion with Zille as well, and then she undermined me to the core. But that’s politics. You’ll meet different people, you get different responses. And so that’s that but you take nothing personal.

On what the roadmap for 2024 looks like for the RDP

I’ll tell you we are the only party that’s got the formula to remove the ANC from power. But unfortunately that formula requires money.  Where there’s no party, you can speak to all of them. There is absolutely no party in South Africa, let alone with a formula that even has a clue of what it takes or what it should take, or how to remove the ANC. We’re the only party with a clear roadmap on how to remove the ANC from power. But unfortunately, running a political party is a very expensive exercise and without funding, unfortunately, we can’t do that. Now, funders in South Africa are only funding celebrities, political celebrities. They’re not interested.

Secondly, we are continuing to engage political parties. We continue to inform them that, look, even with Mmusi Maimane and Lekota when we had a meeting, I told them that none of us is going to succeed on our own. I told them to the best of last year, if money was not a problem, only the RDP has it in itself to remove the ANC from power. One of the advantages is that I know the ANC more than the majority of the leaders, even in Luthuli House, I know and understand that organisation, I’ve grown with it from the classroom. I know its pulse, from branch to national. I know its strengths, I know its weaknesses. I know why it wins elections and I know how it can lose elections. But all of that requires money.

There are two things that will happen in 2024. One, the ANC will win elections. Two, even if the ANC loses elections, it will get about 45%. The leaders of the smaller parties will race to Luthuli House to offer their votes to the ANC in return for ministerial positions as kingmakers. Yes. So the ANC, we’re still in 2024. Whether it wins or loses, it will govern because many opposition parties have failed to present themselves as formidable alternatives to the ANC, for this country. Most of the leaders of  political parties are only concerned with themselves. When they negotiate anything with the ANC or any party. it’s not about the people. It’s about self .

So those who think that ANC is going to get out of government in 2024, I tell you, the only chance that the ANC may not govern in 2024 is if RDP was to access funding. Because I can tell you, even if they were to get 45% with the correct funding this year RDP could get too close to them to an extent where we would be able to position ourselves to attract some opposition parties for coalition. But still, the post-election coalition in South Africa is very risky. We’ve seen it in municipalities. Municipalities become more unstable than they were under the ANC. There may not be corruption in the meanwhile, but there is no stability. There’s no leadership. The work is not done. You end up with two bad things to choose from and people end up saying, the ANC was better even though they are eating the money.

On calling the ANC an evil organisation, yet millions of South Africans vote for it

When the ANC took over government, it closed factories all over the country. People lost jobs. The factories where people were earning a living were working and the ANC closed them. The ANC closed teacher colleges. Teacher training colleges were closed by the ANC after 1994. They were not closed by the apartheid government. The ANC, having done that, promised people heaven and earth, a better life for all. Obviously people didn’t mind because the government closing them meant government wanted to give them something better. They viewed the work in those factories as oppression until they didn’t have it. Five years down the line, the ANC did not deliver the jobs. People were swimming in abject poverty. You know what the ANC does: it gives them grants. They are following the ANC everywhere it goes and the ANC promises them it will open teacher colleges. It doesn’t tell them why it closed them in the beginning. And remember that by closing those teacher colleges, later on we had a crisis of teacher shortages in South Africa. So they created problems in the hope that when they solved the problems, people would forget that they were the creators of those problems.

Many people who went to exile or did not attend were not killed by the Boers, were not killed by the apartheid government. They were killed by the ANC. They may lie and say it was because of malaria and everything. Then I challenge you to read the Chris Hani memorandum. Then you will have a glimpse of how evil the ANC is. So it’s not it’s not out of hatred that I’m saying the ANC is an evil organisation. No, it’s honest. I’ve got evidence to back that it’s an evil organisation.