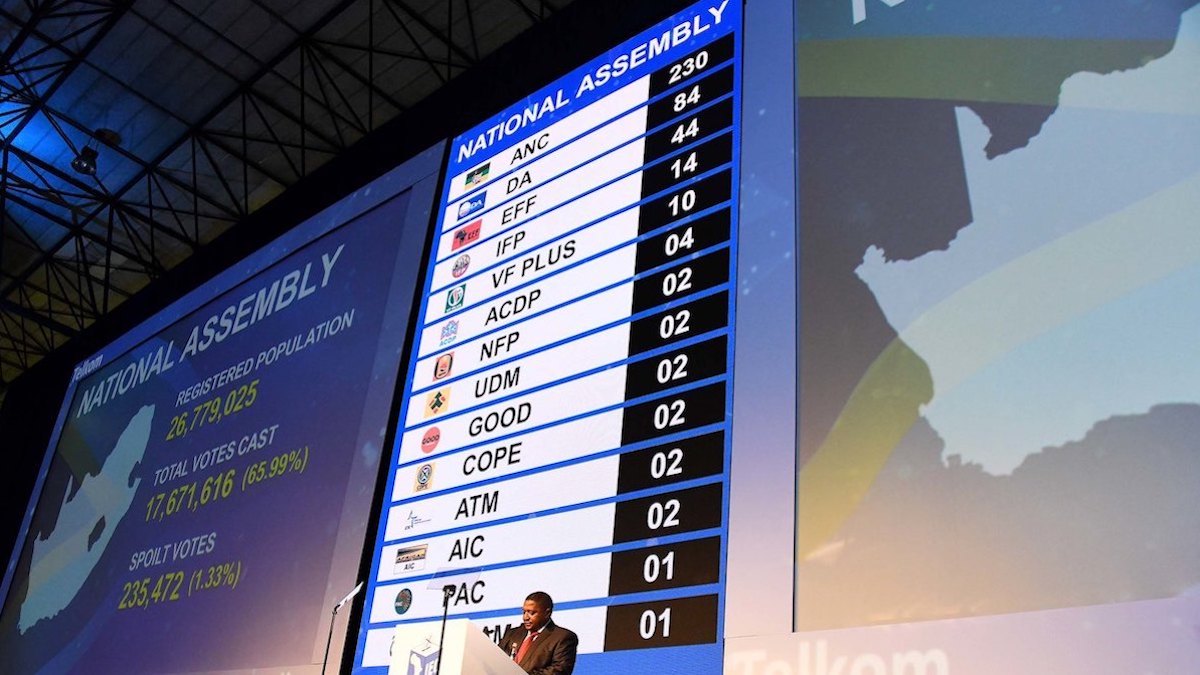 Like a wounded buffalo flailing around in the bushveld before falling to its knees, the ANC has demonstrated that it is going nowhere and has no support, argues Douglas Gibson, a former opposition chief whip. He believes that only coalition politics can save South Africa. But a fractious coalition arrangement with selfish component parties, some with no discernible principles, and vainglorious leaders for sale to the highest bidder, is not the answer either. What is waiting in the wings over the next two years for our beleaguered land? This article first appeared in The Star newspaper. – Sandra Laurence

The ANC is finished. Can the opposition step up?

The ANC story has run its course. Almost every aspect of government has failed or is grinding to a halt.

We hear constantly that the 2024 election will be a disaster for the ANC. While continuing to refer to itself as a “movement” or even a “glorious movement,” it will lose the election, polling less than 50% of the votes.

Our country desperately needs leadership. The kindest viewers concede that the president is failing. He has receded into the background. His party is riven with factional disputes and conflicted personalities. Many ministers are ill-equipped to be cabinet ministers, some because of lapses of integrity and others because of a lack of skills. Some suffer from both deficiencies.

Troubles seldom come singly. South Africa is not an easy country to govern. But the crises seem to have overwhelmed President Ramaphosa. Famous for his undertakings to end corruption, he was ill-advised in listening to lawyers and failing to take the country into his confidence about the extraordinary Phala Phala scandal. Ramaphoria is no more.

This being so, it is time to weigh the alternatives. Those in the ANC are too ghastly to contemplate. Most of them will be yesterday’s men (and women) after 2024.

The official opposition, the Democratic Alliance (DA), labours mightily in parliament, doing an excellent job of holding the government to account and earning a reputation for providing good government wherever it is in power. The DA has sufficient good people, in addition to John Steenhuisen, capable of doing the work of government.

Despite these positives, it is unlikely that the DA will be able to poll a majority of votes in this election. Therefore, the DA must find partners with whom it can form a viable, stable partnership to govern South Africa in a coalition. But we need a better government, not a worse one. A fractious coalition arrangement with selfish component parties, some with no discernible principles, and vainglorious leaders for sale to the highest bidder will not inspire desperately needed confidence.

Confidence in a new government, after the honeymoon, is essential. It will have huge problems to tackle and solve. DA-led multi-party coalitions are in office in major metros like Johannesburg, Tshwane, and Ekurhuleni. There are DA majorities or multi-party coalitions in towns across the country, many in Western Cape.

The DA learnt hard lessons after the 2016 election. There absolutely must be a clear, principled agreement in place, subscribed to and binding on the coalition partners sharing agreed principles.

There must be a coalition forum meeting regularly to resolve disputes or problems in the interests of the voters, ensuring coalition stability and co-responsibility. One must never operate at the mercy of parties like the EFF outside the coalition. The EFF cannot resist blackmailing and extracting payment in return for support, even referring to a DA mayor as the “EFF mayor.” It is better to go into opposition than become the captive of the EFF.

The next two years will be difficult for all parties. Each will campaign for support for itself. Importantly, however, the total opposition vote must grow at the expense of the ANC and the EFF. Targeting each other as the prime enemy is unproductive and especially so where some position themselves in opposition to the DA, and not the ANC.

Opposition parties must now co-operate and prove they are worth trusting with a share in the government of our country.