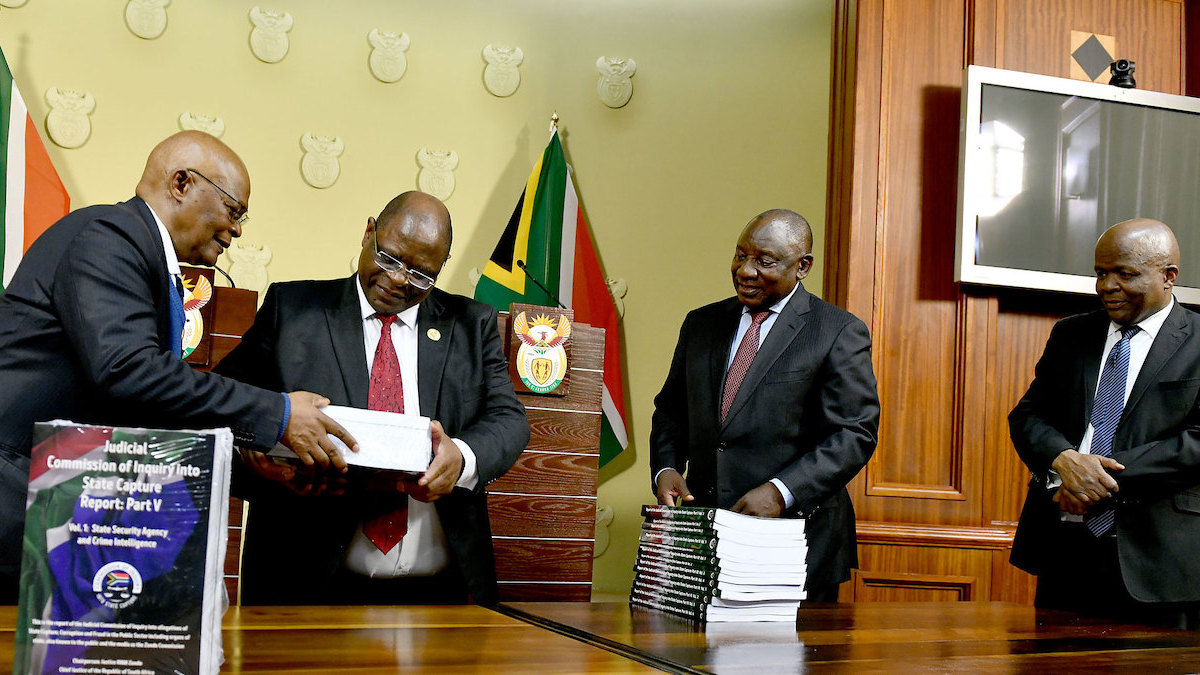 Karam Singh, director of Corruption Watch, is well aware of the cynicism among South Africans when it comes to any anti-corruption initiative borne from the government – but he’s optimistic the new National Anti-Corruption Advisory Council (NACAC) is fundamentally a progressive development. He told BizNews that the mere announcement of the establishment of the council isn’t in itself something to be applauded as “the proof will be in the pudding”, but it remains laudable. In this discussion, Singh touches on NACAC’s role in assisting President Cyril Ramaphosa to compile the government’s implementation plan flowing from Zondo’s State Capture Inquiry recommendations. The window for Ramaphosa to emerge as an anti-corruption champion is closing fast, bedevilled by allegations he himself is facing, coupled with the dubious cast of characters, fingered in Zondo’s reports, he continues to keep in his cabinet. – Michael Appel

Karam Singh on what the formation of NACAC means going forward

This was long expected, this announcement. It flows from the adoption by cabinet I think as early as 2020 or at least in 2021 of the national anti-corruption strategy, the strategy that was negotiated over several years with social partners. It is meant to kind of be the strategic framework to guide our approach to fighting corruption up until 2030. It’s got different pillars. It’s got different ideas around institutional framework and new institutions to fight corruption. And the Nacac was really meant to be the vehicle through which the national anti-corruption strategy would be realised. It would be a driving instinct, an institution that would help drive implementation of the strategy made up not just of people from the government, but from other people in civil society and business. So I think what’s important to note is that this isn’t something that President Ramaphosa just pulled out of the air or is something that we should be surprised at. I think there’s so much cynicism about the fight against corruption now that any sort of potentially positive development that comes out is seen as some kind of a chess move in a game to get the public looking elsewhere while other things are going on. I understand the scepticism and the cynicism people feel and the fatigue. But I don’t think that’s what this announcement was meant to be about and what the potential is for this advisory council.

Absolutely. If you go into the text of the national anti-corruption strategy, that was the main purpose of the NACAC. Fundamentally the first thing on the NACAC’s agenda and I don’t want to pre-empt it, is this question of the sufficiency of the existing institutional arrangements. So that could be changed. It could involve changing the mandate of the NPA. It could be at the moment we have the police and we have the NPA, we have the SIU. The SIU has civil law jurisdiction; it doesn’t have jurisdiction to proceed on criminal matters. It has to hand those over. At the moment, our framework gives the NPA the monopoly on prosecutions. In very special cases, you can do private prosecutions. I think what’s envisioned by an anti-corruption agency is an agency that could look at the issue of corruption from the entire lifecycle, so from prevention, to public education, other kinds of initiatives related to ethics and integrity all the way through to consequence management, whether that be taking cases in front of a Special Tribunal for Civil Recoveries or actually doing prosecutions. Then that would mean that we would have another body other than the NPA that could do prosecutions.

I think it needs to be seen as a progressive development. The proof will be in the pudding. You know that the mere announcement of the council isn’t in and of itself a testament to the fact that we’ve turned a corner. But it is a step in the right direction. I mean, you mentioned the FATF issue and the potential that South Africa could be greylisted – that’s another whole ball game, distinct from this. There’s some overlap between some of the things that Zondo is recommending, some of the things we’re required to do in terms of FATF and some of the things that we should be doing in terms of the national anti-corruption strategy. So for example, the notion of a central register related to beneficial ownership transparency – you would have a register that could be monitored to pierce the corporate veil, to fight the kind of fronting and other kinds of procurement fraud that we see at the moment. At the moment we don’t have that kind of transparency in the system. These are recommendations which have been kicking around for a long time.

It does. This kind of uneasy relationship between the party and the state, where all this attention goes into the processes in the party and the step aside resolution and then the sort of non-consistent application of the step aside resolution is absolutely damaging. You know, we saw in the Digital Vibes scandal, through a relatively quick process of revelations, a situation where the then Minister of Health stepped aside. I think people saw that as positive, saw that as a form of accountability, a kind of consequence management in a context where it’s not easy to prosecute people, where it’s not easy to recover money, where it’s not necessarily easy or automatic to blacklist a company. You would think that the one thing that the president could do is to take control of his cabinet and say anybody who’s got this kind of shadow over him, who’s implicated in this report, you know, needs to step aside. There’s no divine right that Gwede Mantashe has from being the secretary-general of the ANC to being a cabinet minister. You know, there’s just too much for him to answer to, in terms of what came out in the Zondo Report. For somebody like him to retain his position, it’s unacceptable.