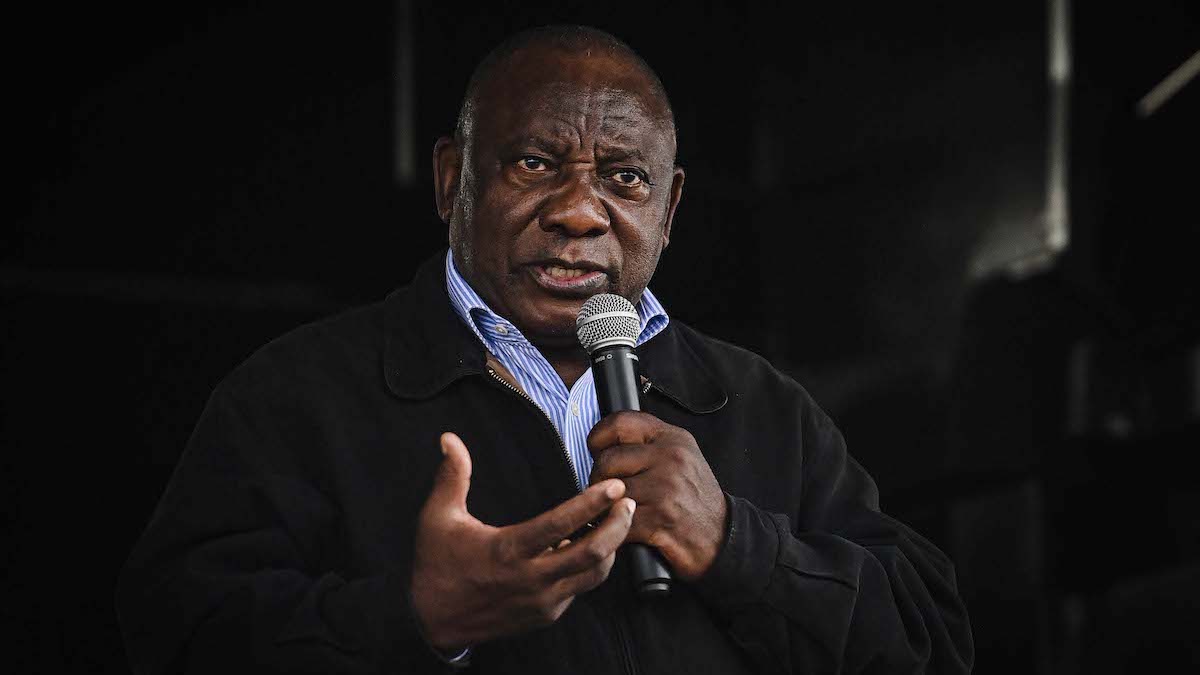 Theuns Eloff asks why President Ramaphosa is unable to see the clear connection between cadre deployment and corruption, and warns that the policy could become his nemesis. An ANC policy document of 1996 recommended that the influence of the liberation movement should be extended to all “levers of power”: the defence force, police, bureaucracy, intelligence structures, judiciary, state-owned enterprises, regulatory bodies, the public broadcaster, the South African Reserve Bank. The ANC’s 1997 Mafikeng conference adopted this document and confirmed that cadres should be deployed to all organs of state, including the civil service. Can you guess who led the committee appointed to advise the ANC’s National Executive Committee on this? Why, Jacob Zuma of course, who perfected cadre deployment as a mechanism for state capture and corruption. It became formal ANC policy in 2007, when Zuma ousted Thabo Mbeki as president. But why, in 2022, is Ramaphosa still denying the consequences of cadre deployment? As early as 2014, a Public Service Commission discussion document stated that cadre deployment and affirmative action were two of the main reasons for the lack of service delivery. It warned that cadre deployment had degenerated and led to the appointment of civil servants without the qualifications or the ability to do their work. Read more from Eloff below on why he believes the civil service cannot be turned around while cadre deployment remains ANC policy. The article is republished courtesy of Politicsweb. – Sandra Laurence

This deployment committee awarded itself wide powers and made recommendations (or rather decisions) on the appointments of, among others, cabinet ministers, directors-general of government departments, officials and leaders in provincial and local governments, judges, state-owned enterprises, educational institutions and ambassadors. Zondo found that the Constitution does not mention that the membership of any political party or the recommendation of the ANC’s deployment committee should be a condition for such appointments.

Apart from the fact that Ramaphosa defended and tried to justify cadre deployment in his testimony before the Zondo Commission, he more recently – in an answering affidavit in the court case brought by the DA to outlaw cadre deployment – stated that the recommendations of the Zondo report were not binding on him. According to Ramaphosa, Zondo did not say that cadre deployment should be declared illegal, but only found that it would be unconstitutional and illegal if the president of the country and cabinet ministers took directions from the ANC deployment committee.

He further alleged that cadre deployment was a purely party political matter and therefore did not fall under the prescripts of section 196 of the Constitution. This article prescribes that appointments in the civil service should be independent and impartial, and must be carried out without fear, favour or prejudice. Section 195 further states that such appointments should be done based on ability, objectivity and fairness. The question is: why would a president publicly state that he does not deem the recommendations of the commission of enquiry into state capture to be binding, even though he can use those to fight widespread corruption? Why would he try to deny the consequences of cadre deployment or try to rationalise that the policy was only badly implemented and abused, but nevertheless necessary? Why doesn’t he see the clear connection between cadre deployment and corruption?

Where does cadre deployment originate?

As a practice, cadre deployment isn’t unique to the ANC. It was and still is used in countries such as Brazil, Singapore, Malaysia and China, but not as a specific policy in a single western multiparty democracy.

An ANC policy document of 1996 recommended that the influence of the liberation movement should be extended to all “levers of power”: the defence force, police, bureaucracy, intelligence structures, judiciary, state-owned enterprises, regulatory bodies, the public broadcaster, the South African Reserve Bank and the like. The ANC’s 1997 Mafikeng conference adopted this document and confirmed the necessity that cadres should be deployed to the various organs of state, including the civil service and other centres of power. The committee appointed to advise the ANC’s National Executive Committee on this, was led by Jacob Zuma. Cadre deployment became formal ANC policy in 2007, when Zuma ousted Thabo Mbeki as president.

By 2014 there were signs that things were going in the wrong direction. In a discussion document of the Public Service Commission, it was stated that cadre deployment and affirmative action were two of the main reasons why there was lack of service delivery. It warned that cadre deployment had degenerated and that it led to the appointment of civil servants who did not have the qualifications or the ability to do their work. This discussion document was soon removed from the commission’s website and the issue did not receive any attention within the ANC.

What is noticeable and interesting, is that the following policy conferences were more nuanced on the subject of cadre deployment. In 2012, the ANC’s well-known Strategy and Tactics document stated that the organisations places a “high premium” on the involvement of its cadres in all centres of power, including the civil service, the business sector, the media and universities. Such cadres should be driven by the values of honesty, hard work, service to the people and respect for the laws of the land. It is almost as if the authors realised that something was starting to happen under Zuma.

2017’s Strategy and Tactics document boasts that the liberation movement had strengthened its grip on the state machinery, and that the transformation project was starting to gain momentum. Cadres should therefore give leadership in all centres of power and Luthuli House, as strategic centre, should give guidance to all cadres.

Local cadres should monitor the implementation of ANC policy, and where it does not happen or where there was poor leadership, they needed to act decisively. However (probably because the dangers of state capture had already been identified), it cautioned that there should be a special focus on the quality of cadres, their academic qualifications and ethical orientation.

In the ANC’s constitution, a deployed member “means a member who accepts to perform certain duties and functions on behalf of the ANC in a representative capacity, in addition to his or her duties and obligations as a member”. Nowhere in its constitution or in the most recent Strategy and Tactics document (2017) is there any formal mention of a central cadre deployment committee.

From the above it is clear that the ANC’s cadre deployment policy (with a committee under the chairmanship of the deputy president) was actively implemented since at least 2007. The policy came into being under former president Thabo Mbeki, but was perfected as a mechanism for state capture and corruption by Jacob Zuma. The chairman of the cadre deployment committee during the Zuma presidency was Cyril Ramaphosa. Today he and the rest of the country are stuck with its consequences. The full impact was, however, only revealed through the work of the Zondo Commission.

The curious thing is that this all-powerful committee is not sanctioned or acknowledged by the constitution of the ANC, and that minutes of its meetings were either never taken, or destroyed before the Zondo Commission could get its hands on them. It is abundantly clear from the Zondo report that cadre deployment, state capture and corruption went hand in hand.

What are the consequences of cadre deployment?

Cadre deployment stands in a toxic relationship with affirmative action, racial transformation and black economic empowerment. It is the primary cause of our present failing and stumbling state. The intention of cadre deployment had moved from the noble “get the best among us do to the job well”, to “just appoint a loyal ANC member”, to “appoint anybody who is an African” to “appoint someone who is close to Zuma of can be controlled by Zuma or the Guptas”.

The consequences of cadre deployment are today clear for all to see. These stretch from totally dysfunctional local governments, to provincial governments under administration, to stumbling national departments, to loadshedding almost every day. The code word “lack of capacity” is a euphemistic way to acknowledge that the toxic mixture of cadre deployment, racial transformation and corruption had almost crippled the whole state.

The essence of cadre deployment is that it appoints people who have a greater loyalty and accountability to the ANC than to the country and the Constitution. It destroys any distinction between party, government and state. It further causes incompetents and unqualified people to be appointed in the public service – and this, in turn, stokes the fires of own interest and corruption. It is incontestable that by far the majority of civil servants today have cadre deployment and /or racial transformation to thank for their appointments. And that is the cause for our stumbling and failing state.

Why on earth should Ramaphosa then defend cadre deployment?

Back to the first question: against the above background and from what was confirmed by the Zondo Report, why on earth would the president defend cadre deployment and clearly want to maintain it?

There are a few possible answers:

– Ramaphosa grossly underestimates the destructive consequences of cadre deployment (and racial transformation) and does not understand the almost inevitability of ensuing corruption on many levels. It means that the president is totally out of touch with what is actually happening at almost all levels of government. If he, for instance, speaks at a local government level, his pleas for better service, accountability and transparency is addressed to people who were placed there by cadre deployment, and who don’t want to, or cannot, heed his pleas.

– Because Ramaphosa has been involved for decades in ANC leadership positions (including as chairman of the deployment committee under Zuma), he sincerely believes that the ANC cannot implement its policies without loyal cadres. The policy therefore must just be better implemented, with better recruitment of cadres, but still with no distinction between party and state.

A stronger variation on this theme is that Ramaphosa still clings to the Marxist concept of the ANC as the vanguard of the national democratic revolution, and that people who are not loyal ANC members cannot be trusted with that task. The ANC’s express intention to control all the levers of power in our society is too deeply embedded in his ANC ideology.

– Ramaphosa feels himself still under pressure from the sections of the ANC who are critical about the Constitution and the rule of law, and who see cadre deployment as a way to a secure career and wealth. If he should abolish cadre deployment, he may lose this section’s support and be replaced at the December elective conference.

– Ramaphosa views the retention of cadre deployment as a prerequisite in maintaining the fragile unity of the ANC. Abolishing it may be the last straw that breaks the unity camel’s back.

Whether the answer to our question is one or more of these possibilities, it is clear that Ramaphosa’s remark that Zondo’s recommendations are not binding will harm him in his self-declared fight against corruption. If one of Zondo’s recommendations is not acceptable, why would the other carry more weight? And if the courts find the same on cadre deployment, would he then listen and act? Ramaphosa’s remarks and views on cadre deployment could also come back and bite him when seeking coalition partners after the 2024 election.

If Phala Phala is indeed Ramaphosa’s Nkandlagate, surely cadre deployment is his own Rubicon. Corruption cannot be combatted effectively and the ANC and the civil service cannot be turned around while cadre deployment remains ANC policy.