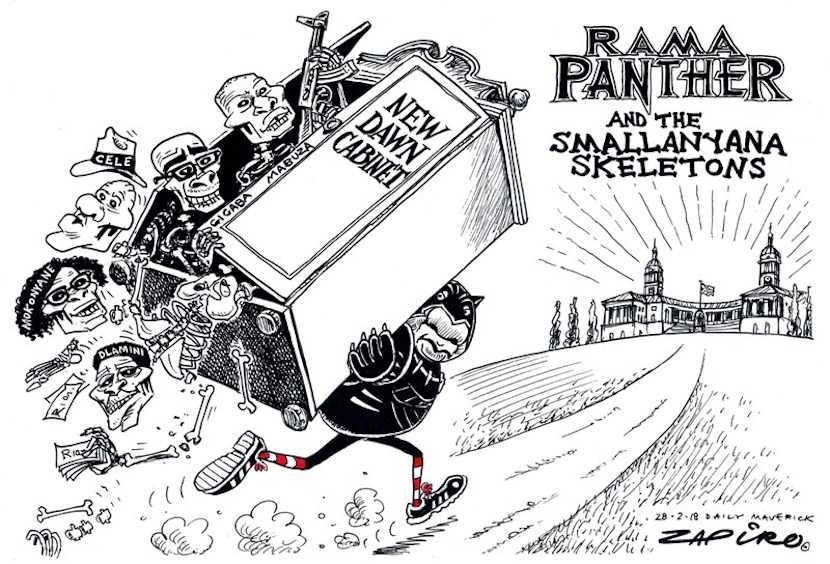 CAPE TOWN — This is not quite President Cyril Ramaphosa’s ‘Rubicon moment’ and the context is different to August 15th, 1985 when PW Botha failed to live up to huge expectations that he would end apartheid and release Madiba. However, if Ramaphosa doesn’t reduce his cabinet significantly in a couple of weeks’ time, at the very least excluding alleged bribe takers and court perjurers, he’ll also have failed to live up to great expectations – which he’s had a huge part in creating. He set up commissions that are blowing open corruption, nepotism and revealing how South Africa was largely run by a greedy, corrupt bunch of politicians, alleged civil servants and reprehensible businessmen. He’s cleaned up the para-statals, SARS, and prosecuting authorities, is fumigating a dodgy police senior command, especially the intelligence branches. All of this will suffer grievous insult should he shy away from cleaning up his cabinet and especially his executive. He’ll be hard put to dismiss charges of being a paper tiger and lose ground in the most important war of all; the one for the hearts and minds of his countrymen. This story gives flesh to these contentions, adding that ever-present ingredient in SA’s volatile political cocktail; the trade union influence. – Chris Bateman

(Bloomberg) – South Africa’s biggest labour-union group wants President Cyril Ramaphosa to cut the size of his cabinet to 26 ministers and a maximum of six deputies, and exclude anyone implicated in graft.

The appointments will be the next big step for investors watching for signs Ramaphosa can follow through on promises to revitalise the economy and clean out the government after a series of scandals during predecessor Jacob Zuma’s presidency.

Ramaphosa is due to be sworn in for a five-year presidential term on May 25, following the ruling African National Congress’ victory in last week’s election, and could name his new cabinet a day or two later. While the president has the prerogative to choose his executive, he would typically consult with the ANC’s other top leaders and the party’s political allies, the Congress of South African Trade Unions and South African Communist Party.

A number of interest groups have been lobbying over key posts, but Cosatu should be among those with the most sway since it was instrumental in helping Ramaphosa win control of the ANC in late 2017 – paving the way for him to replace Zuma as president two months later. While Ramaphosa, who is a former union leader, fired a number of Zuma’s ministers who had been implicated in graft after taking office, several others kept their posts. Zuma and the ministers have denied wrongdoing.

“We told the president we don’t want a legalistic approach that those who have not been found guilty” keep their posts, Cosatu said in an emailed response to questions. “We simply cannot afford to have a cabinet of compromised characters any longer if we are going to be able to fix the state.”

Ramaphosa, 66, who currently has 34 ministers and 35 deputies, has said the size of the cabinet will be trimmed but hasn’t said which posts will go or who he plans to appoint.

The Communist Party also favours a smaller cabinet, but isn’t making specific recommendations to the president about who to appoint, according to its spokesman Alex Mashilo. Discussions between the ANC and its allies about the new executive are ongoing and should be completed shortly before Ramaphosa’s inauguration, he said by phone from Johannesburg.

Cosatu wants it and the communist party to have representation in cabinet, and for long-serving ministers who haven’t performed well to be replaced. Among those it wants retained are Ebrahim Patel, a former union leader who currently serves as economic development minister, and Police Minister Bheki Cele, who it said had done well. Cosatu leaders have previously said they want Finance Minister Tito Mboweni and Public Enterprises Minister Pravin Gordhan to go.

Women’s Minister Bathabile Dlamini has been accused by the nation’s highest court of perjury. Nomvula Mokonyane, the environmental minister, was accused in testimony at a state inquiry of taking bribes. Both have denied the allegations.

Several ministries could be consolidated, but civil servants shouldn’t be fired and the delivery of government services shouldn’t be compromised, the labor group said.

South African assets have responded positively to Ramaphosa’s election win. The rand has gained 0.8% against the dollar since the vote while the yield on the 2026 government rand bond has declined 11 basis points.

Cosatu’s proposals on re-configuring the government include: