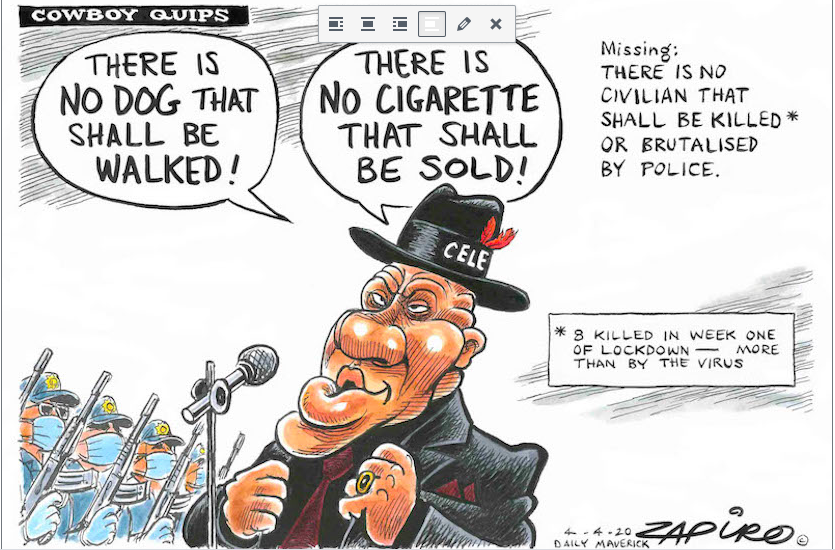 South African President Cyril Ramaphosa has reportedly gained the upper hand in a power struggle in the ANC. He is said to have survived a bid to force him out of office, clearing the way for him to overhaul his cabinet. These speculations about the wrangling at three-day meeting of the ANC’s National Executive Committee echo the months of public confusion about the inner workings of the National Command Council, which is directing the country’s response to the Covid-19 pandemic. Rex van Schalkwyk, Chairman of the FMF Rule of Law Board of Advisors and a former judge of the Supreme Court of South Africa, points out in this article that the phrase “command council” indicates that the function of the body was not seen as a service to the civilian population, but as an instrument of coercion and enforcement, and says that we have in fact witnessed a silent coup. – Renee Moodie

The language of lockdown

South Africa is said to have had one of the harshest lockdowns in the world. Considering the company we keep that is indeed a harsh appraisal. We also have the baneful distinction, together with countries such as China (and some of the neo-Marxist states of the United States) of having endured one of the most authoritarian regimes. The language of lockdown says all we need to know in that regard. The somewhat secretive composition of the Coronavirus Command Council – until it was a secret no more – whose brief it was to advise, to command, or both, was derived, one may surmise, from the equally secretive KGB, whose authority was based upon no law known to man.

Why would the ANC government, which was once so sensitive to the descriptors applied to various government agencies with enforcement capability, such as the South African Police, and the Receiver of Revenue, seek to establish a “command council” as part of the enforcement mechanism of the lockdown? It can only be because its function was not seen as a service to the civilian population, but as an instrument of coercion and enforcement; and so it turned out to be.

There was, we were told, no need for consultation with affected parties on, for instance, the tobacco and alcohol bans, nor even on the senseless curfew, because the Disaster Management Act contains no such stipulated requirement. However the Constitution, which is the superordinate law, requires deviations from its strictures on individual rights (many of which were directly impacted by the prohibitions) to be compatible with the equivalent prohibitions in an open and democratic society, based upon freedom and equality.

The responsible minister, Nkosazana Dlamini-Zuma, refused even to give a plausible reason for the prohibitions, until court procedures required such response. Even then, she sought to justify the tobacco ban upon the basis (among others) that the economic harm was ameliorated by the profits generated by the illicit tobacco trade.

Minister of Police Bheki Cele justified the alcohol ban upon the basis that the murder rate had declined in the time the ban had been in force, and hinted darkly that perhaps the ban should be made permanent, or at least until such time as people had learned to “behave themselves”.

The stipulation that we learn to behave ourselves was repeated, only days ago, by Transport Minister Fikile Mbalula. The issue of our collective behaviour is also an issue upon which Health Minister Zweli Mkhize has dwelt. He has threatened that stricter lockdown measures could be re-imposed at any time if we do not behave. In each of these cases the yardstick by which society is measured is the very worst of those who are unable to behave themselves.  Is it just me or is there something about the authoritarian schoolmaster redolent in the repeated use of this phrase?

This form of discipline and the mindset that it induces in an abused population, subject to capricious decrees, was evident on the evening of Tuesday, 25 August, when a rumour was spread, false, as it subsequently turned out to be, that the reinstatement of the alcohol ban would occur on the following day. In short order there were queues, stretching for a city block and more, outside the various bottle stores, of those who know how to behave themselves, anxious not again to become the victim of a growing tyranny.

And then there was the president’s enlistment of the army for the purpose of enforcement of the lockdown regulations. The use of the army, in peacetime, against the civilian population to ensure compliance with rules ostensibly for their own benefit, must surely rank as a world first for a country, under the rule of law, which presumes to call itself a democracy. Military authority has a discipline of its own, and that discipline is premised upon the unquestioning obedience to the language of command. Was this perhaps a foretaste of things to come; of what may be thought necessary to enforce compliance with expropriation without compensation and the march towards the national democratic revolution?

Notwithstanding the convincing and professional analyses done by the multidisciplinary medical/legal/actuarial group known by the acronym PANDA, which have all shown the appalling wasted cost of the lockdowns, and the paltry successes achieved, the ANC has hailed the outcome as a resounding success. A spokesman for the ANC has called the government’s action “exemplary”, which is a term that ranks with the superlatives.

Meanwhile, according to PANDA, the middle class has been eviscerated; the schooldays irretrievably lost now approach one billion; there are 3 million more unemployed; and for the first (but certainly not the last time) help has been sought from the IMF. According to the most recent estimate made by PANDA, the lockdown will cause a loss of life at least 30 times greater than the lives saved.

Now information has been leaked that the Command Council is to be used as a model for the future control of municipal affairs: a transparent device by the ANC to centralise power within the Politburo of Luthuli House.

None of this is compatible with the rule of law which postulates a state under law – a state whose entire authority is subject to law. What we unfortunates have witnessed is a silent coup: the incremental boiling of the frog, in the infamous words of President Cyril Ramaphosa.