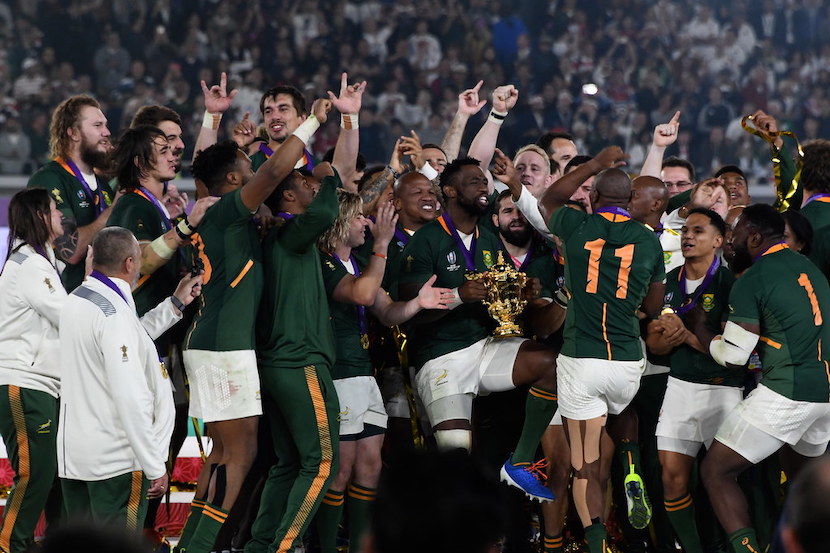 The first 26 minutes of the second half are a tight, unspectacular battle as four staggered English forward replacements and their team-mates more than hold their own against the Boks, who are luckily, also fortified by some injury and more regular replacements. At Minute 66 we see what schoolboy coaches will for years to come, (Coronavirus-willing), be using to illustrate classic errors of positional play. They say truth is stranger than fiction. If any seasoned rugby writer could match the legendary Afrikaans radio commentator, the late Gerhard Viviers, in reflecting on-field drama, then he might have a slim chance of conveying the excitement that follows. It starts with that brutal Malcolm Marx tackle on Henry Slade, or as Viviers would have put it, ‘hy het hom uit the aarde geduik!” (he tackled him out of this world!”) The ball however is left in the Here and Now, slipping down and recoiling off Slade’s belly back onto Mother Earth. Ever on hand, Lukhanyo Am holds his nerve as it bounces awkwardly, scooping it up on the second bounce and flicking it out to Steph du Toit who charges downfield with Cheslin Kolbe waiting breathlessly on his outside. The rest is rugby history as Kolbe outruns two forwards trying to shepherd him into touch and faces Owen Farrell, bent on tackling him into touch. He feints towards the touchline and at the last milli-second, side-steps inside Farrell to easily beat him. It’s astonishing stuff. With just six minutes to play and a kick to come, the reality of what was regarded as Mission Impossible for the previously embattled Boks, begins to sink in. World Champions again after last beating England by a much lesser margin in France 13 years ago, now equalling New Zealand’s three wins. – Chris Bateman 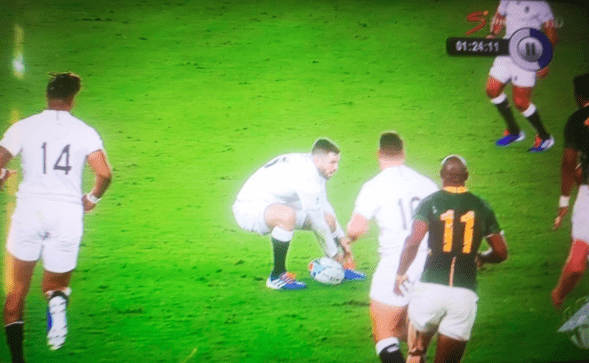 South Africa in possession. The ball goes to Am, but after running some way he realises there is no way through for him. He kicks while on the run. The ball describes a gentle parabola as it flies toward full back Elliot Daly and, probably as intended, bounces just before him. Daly is well positioned to gather the ball but looks up before the ball is safely in his hands and knocks on. At the subsequent scrum England concede a penalty which Pollard goals. Another soft transgression leading to a loss of three points. England go into their change room six points down – an even worse situation than Sir Clive had warned against.

The ITV commentary team consult Sir Clive. Sort out the scrum Eddie, but what about the handling?

Despite Sir Clive’s gloomy prediction, England, though behind, are still very much in the game. They were the last to score. Replacement forwards George Kruis (half-time,) Joe Marlar (45th minute,) Luke Cowan- Dickie (59th minute) and Mark Wilson (59th minute) all look pleased to be on the field and keen to play some rugby. Even Dan Coles (3rd minute), who has had a torrid afternoon is getting himself around the park. Billy Vunipola has a bloody, bandaged head wound, but is still game to execute his trademark bullocking runs.  This is by no means a beaten English pack.

In championship tennis it is easy to recognise the big points because the scoreboard flashes MATCH POINT. Why rugby is the prince of spectator sports is big plays can arrive without warning and sometimes half the players on the field (and usually all the commentators) are unaware of the significance of what is happening.

Presumably because of the strength of the South African line-out and the threat posed by the South African rolling maul, when Ben Youngs, the England scrum-half, put in a box kick he aimed to keep it infield. This tactic requires an energetic kick chase by the loose forwards to prevent the ball being run back at them.

Ben Youngs puts in a standard kick from the base of a ruck on which he gets reasonable distance. Willie Le Roux gathers, but in line with the English game plan, he is promptly caught by replacement flank Mark Wilson who is supported by Tom Curry. All well and good according to the English playbook. Unless one had sight of the overhead TV shot.

The ruck is left of centre to the Springboks. On the extreme Springbok left, within the 5 metre line are three Springboks; including speedster Makezole Mpimpi, second leading try scorer in the tournament. And facing them for England? Nobody. 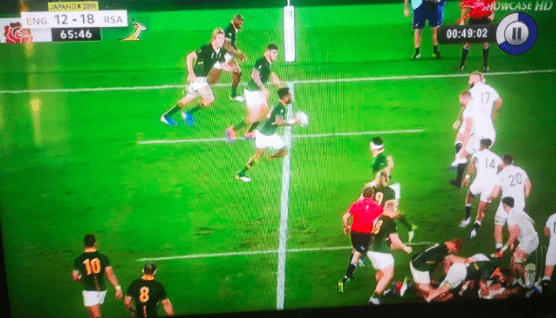 And Anthony Watson, the English right wing, whose duty it was to mark Mpimpi? Well he is, but isn’t there…

Morne du Plessis was a famous South African loose forward in the seventies. He had his critics and their unkind label for him was “the scrum inspector.” He would, it was alleged, join a ruck or maul, take an intelligent interest in what the other players were doing, but not actually do anything himself.

Watson arrives at the ruck in good time, but then stations himself at the side. Notionally this prevents some South African player from gathering the ball and charging round the left-hand side of the ruck; but English players are drifting up behind Watson so the danger is negligible, especially compared to that presented by an unmarked Makezole Mpimpi.

Moreover he is soon joined by two tight forwards. Nonetheless he continues to hold his position, the loose scrum clearly requires further inspection. The last TV image of Watson from this movement is of him jogging gently away from the ruck, showing no sign of haste or stress as if he is satisfied he has done all that could reasonably be expected of him.

Obviously aware Mpimpi is not being marked, the Springboks shift the ball to him as quickly as possible. Elated at receiving the ball with room to move, he turns on the afterburners. Billy Vunipola appears in Mpimpi’s path, but Mpimpi puts in a perfectly weighted chip which flies over Vunipola’s head, bounces, and is efficiently gathered by Am without breaking stride. Before either of the last two English defenders, Daly or Youngs can lay a finger on Am, he flips the ball to Mpimpi who is travelling at speed in a channel empty of defenders and he scores easily.

The ITV commentary team are generous in their praise of Mpimpi and intrigued by Am having passed, when in all probability he could have scored himself. The absence of Watson didn’t appear to be an issue.

England in trouble, but a try now would put them back in the game. Youngs with the ball runs at pace. On his inside, Duane Vermeulen is battling to keep up with him. On his outside is speedster Johnny May.  Defender Cheslin Kolbe is between Youngs and May. Youngs could keep running and force Kolbe to tackle him or he could fling a high pass over Kolbe’s head. Youngs tries the pass but Kolbe easily intercepts it, although he does not manage a clean catch. A really good opportunity to score that elusive English try goes a begging through poor execution. 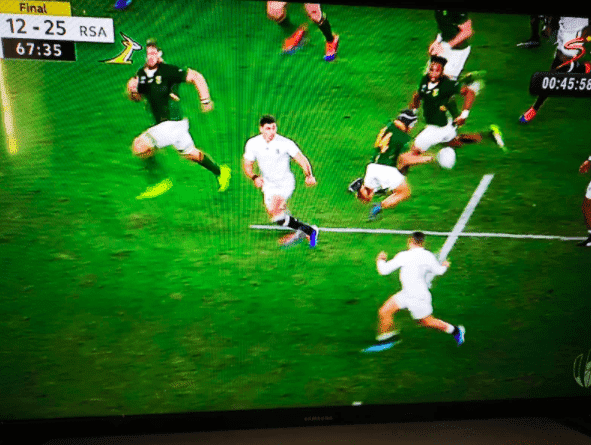 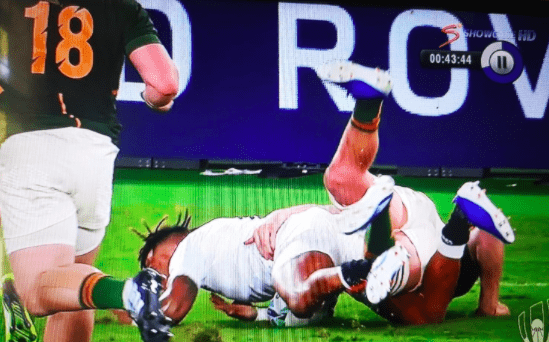 England are awarded a penalty. Youngs takes it quickly; he passes to Watson who is in space on the outside. Watson is tackled, but the English forwards recycle and commence an assault from about 10 metres out. This is a position the English forwards know how to exploit and they look up for it. However, the TMO rules Watson lost the ball forward in the tackle. 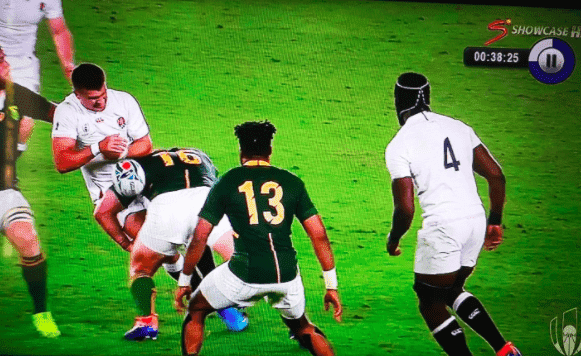 Another big play. To their credit England valiantly try to move the ball forward. Marx puts in a big tackle on Henry Slade and the ball flies loose. Can England never hold on to the ball? Am cleverly delays picking up the loose ball, but eventually spoons it to the ever-present du Toit who feeds Cheslin Kolbe.

Kolbe‘s space to move is restricted by two tight forwards on the left and the touchline on the right. Standing between him and the goal line is Owen Farrell. Kolbe does a goose-step, sets off as if to pass Farrell on his outside but at the last minute changes direction and beats Farrell on his inside. Kolbe scores easily and the engraver commences putting South Africa’s name on the Webb Ellis Cup.

Sheer brilliance by Kolbe; but if two tight forwards managed to get there, why wasn’t there at least one flanker on hand to assist Farrell? 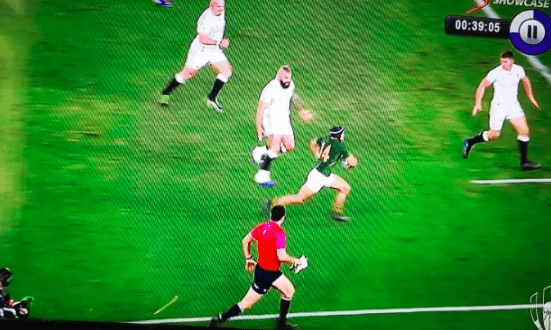 In conclusion, on 13 June, Eddie Jones was interviewed on the Devlin Radio Show (New Zealand) and said the players absorbed what was being said in the media and this affected how they played. The All Black win over Ireland ‘was absolutely brilliant”and  contained “some of the best rugby we have seen “ and was of course reported as such. This created a problem for their coach Steve Hansen  who had to bring his players down to earth for the semi-final.

England on the other hand were reputed to be a side which failed on the big occasion. This said Eddie played into his hands in preparing his players for the semi-final; they believed him when he told them they would have to play above themselves, which they duly did.

The media reception of England’s win against New Zealand was over the top. Eddie told Martin Devlin, that knew he needed to bring his players down from this high and ”paint a stronger picture in the heads of his players of how difficult this game was,” particularly as South Africa would be  “chomping at the bit” as they had enjoyed a “nice mediated” progress to the final and hadn’t had to produce their best game.  However to do this without being unduly negative was not easy. And, Eddie confessed, he hadn’t managed it, a strikingly honest admission.

Is this why, players who played with application and determination against New Zealand, now against South Africa looked, at times, as if they felt they only had to turn up in order to win? Media coverage had implied a win was inevitable, and did the players thus feel they didn’t need to take care how they passed and how they caught? And did this state of mind account for some of the 12 blunders which destroyed England’s chances of winning the 2019 Rugby World Cup?