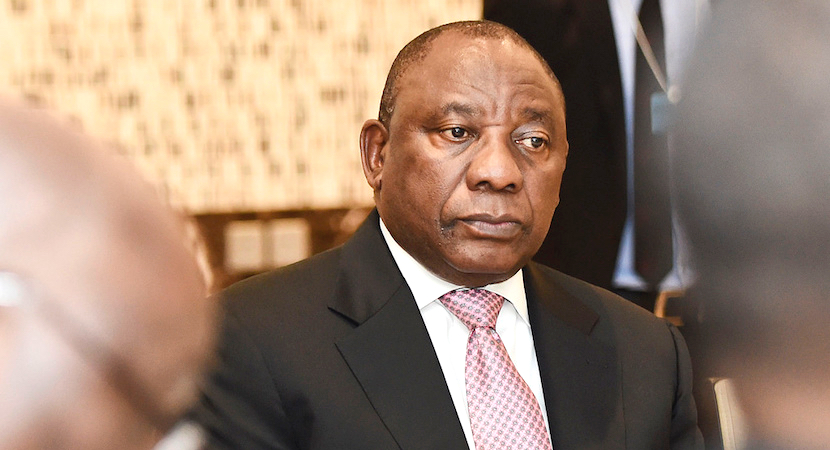 CAPE TOWN — It’s no idle truism that in politics you have your principles, but they can be changed to suit the occasion. Cementing alliances and consolidating power trumps principles every time. To illustrate with the almost impossibly thorny issue facing our ‘clean-up’ President Cyril Ramaphosa; does he fire his Finance Minister Nhlanhla Nene for his dramatic about-face regarding his (multiple) meetings with the Guptas, risk alienating a key ally and setting an unfeasibly high consistency bar requiring him to purge his cabinet of some members accused of greater Zuptoid sins? He’s compromised every which way. Keep Nene on and give his opponents further ammunition and lose global credibility – or fire him and all the politically-convenient Zuptoids in his cabinet, including his deputy, risking his own tenure as president. Firing Nene on his own would be like using petrol to douse a fire. Also, remember; we’ve seen more deputy presidents replace presidents then be consigned to the wilderness – Thabo Mbeki’s spectacular back-firing of Jacob Zuma being a brief recent illustrative anomaly. This story carries several fascinating opinions on Cyril’s conundrum – from what Nene hasn’t yet told us and the implications of that, to speculation about possible high calibre replacements. – Chris Bateman

If Ramaphosa fires Nene or he quits, the president would lose a close political ally, and a new finance chief – the nation’s fifth in less than three years – would have just weeks to deliver a mid-term budget that reassures investors and ratings companies. While a shakeup risks further eroding confidence, failure by Ramaphosa to act decisively may undermine his fight to end the graft and mismanagement that marred his predecessor Jacob Zuma’s rule.

“It is a very sticky situation,” Susan Booysen, a political science professor at the University of the Witwatersrand’s School of Governance, said by phone. “Nene is a key element of the Ramaphosa camp, but now it seems Nene has some skeletons of his own.”

Nene last week admitted to meeting members of the Gupta family at their home six times, contradicting comments he made in a 2016 television interview that he’d only seen them briefly on social occasions. The volte face has sullied his reputation as a competent technocrat who’d faced down Zuma as the former president sought to push through plans to build nuclear power plants the country couldn’t afford.

The Guptas, who were friends with Zuma and in business with his son, were implicated by the nation’s graft ombudsman in wielding undue influence over government appointments and the awarding of state contracts – allegations they and Zuma deny. Zuma ruled for almost nine years before the governing African National Congress forced him to quit in February and replaced him with his 65-year-old deputy, Ramaphosa.

Nhlanhla Nene might have to resign, but why should Mokonyane, Gigaba, Mantashe, Bathabile Dlamini, etc. stay behind?
Madness!

While Nene has apologised for his conduct, he denies having granted anyone preferential treatment or favours.

“He has been found wanting in respect of how many times he said he met the Gupta family,” Mike Brown, the chief executive officer of Nedbank Group Ltd., the country’s fourth-largest lender, said in an interview in Johannesburg. “What we don’t yet know, which is extremely important, is exactly what happened in those meetings and as a consequence of those meetings was there any wrongdoing. I’m sure that will emerge.”

Nene asked Ramaphosa to relieve him of his duties this weekend, the Johannesburg-based Business Day newspaper reported Monday, without saying how it got the information. The presidency and Nene’s office declined to comment.

ANC factions have been discussing potential replacements to suggest to Ramaphosa, three senior party officials said, asking not to be identified because the information hasn’t been made public. Former Deputy Finance Minister Mcebisi Jonas, Reserve Bank Governor Lesetja Kganyago and Barbara Creecy, head of the finance portfolio in the central Gauteng province, have been touted as candidates, they said.

Uncertainty over Nene’s future has weighed on the rand. The currency slumped as much as 1.5 percent against the dollar on Monday and was 0.7 percent weaker at 14.8642 by 4:39pm in Johannesburg.

“Markets have trusted Nene and regarded him as a prudent manager of the economy and government finances,” said Per Hammarlund, chief emerging-markets strategist at SEB SA in Stockholm. “However, the names that are in the running to replace Nene are also trusted by the markets. If Ramaphosa announces a new minister of the same ilk as the three front-runners at the same time as he accepts Nene’s resignation, the market effect will be minimal.”

#NhlanhlaNene must get on with the business of running the country's finances. If lying politicians was our worst problem, we wd be in a much better position right now. Some of the politicians denouncing him have worse skeletons in their cupboards @CyrilRamaphosa

Nene’s transgressions appear be relatively minor and his departure could help bolster Ramaphosa’s clean-up campaign without heralding any major policy shift, according to Mpumelelo Mkhabela, a political analyst at the Pretoria-based University of South Africa’s Department of Political Sciences.

“His resignation would lower the moral requirements for a minister to fall and therefore open room for more corrupt ministers to be forced out,” Mkhabela said. “On the other hand, there are too many people who have met the Guptas and done worse things and some of them are supporters of Ramaphosa. It would be politically impossible to do a 100 percent clean-up.”

While the furor may create some instability in the cabinet before the mid-term budget, it could have potentially positive spinoffs, said Mike Davies, the founder of political-advisory company Kigoda Consulting.

“If Nene does resign or is removed by Ramaphosa, this could support accountability and strengthen governance in the medium term,” Davies said. “Clearly, the prerequisite is that a credible replacement is made.”

The controversy could cost South Africa its sole remaining investment-grade credit rating from Moody’s Investors Service, said Robert Besseling, executive director of political risk advisory firm EXX Africa. It could also be politically dangerous for him as he seeks to unify warring factions within the ANC, he said.

“If Ramaphosa does dismiss Nene, then this would be another serious hit,” Besseling said. “It would further weaken the president’s already fragile political support base.”